Rethinking Parameters of the US Welfare State

Here's a three-question true-or-false quiz about your beliefs on the welfare state:


My guess is that a lot of US economists would agree with at least two of these statements. Irwin Garfinkel and Timothy Smeeding challenge all three in their essay, "Welfare State Myths and Measurement," which appears in Capitalism and Society (volume 10, issue 1). They write: "Very reasonable changes in measurement reveal that all three beliefs are untrue."

While one can certainly quarrel in various ways with the "reasonable changes" they propose, the mental exercise involved in doing so is a nice chance to take a big-picture look at the US "welfare state" in a variety of contexts. When Garfinkel and Smeeding refer to the "welfare state," they are not talking about the extent of income redistribution. Instead, they are talking more broadly about the extent to which the government takes on the provision of a range of social benefits including retirement income, health care, and education spending.

So what is the argument that the US welfare state is not "unusually small"? Their answer comes in three parts. First, the usual pattern in the world economy is that countries with higher per capita income devote a higher percentage of GDP to social welfare spending. Here's a graph with 162 countries. The high-income countries, like the US, are the solid dots. From this image, their similarities look a lot larger than their differences. 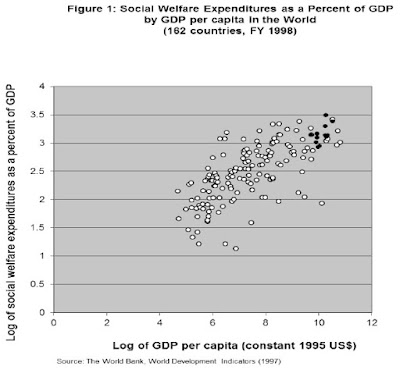 Garfinkel and Smeeding write: "Clearly, the richer the country, the greater the share of their income that citizens devote to welfare state transfers. (Three countries—Hong Kong, Singapore, and the United Arab Emirates—are outliers: very rich with relatively small welfare states. These exceptional nations have not been included in previous research on welfare states in rich nations and we leave it to future scholars to explain their exceptionalism.) The same pattern holds within the United States
and Europe. The higher the income of states or countries, the greater the share of income that they devote to welfare state transfers (Chernick, 1998). Most important, in the international context of all nations, the size of the US welfare state does not stick out."

One might object that the figure is visually misleading, because the horizontal and vertical axes are expressed in log form, which can make differences that are large in the real world look smaller on a figure (at least for those not used to reading log graphs).  For example, on the vertical axis, 3 is the log level for 20% of GDP, 3.4 is the log level for 30% of GDP going to social welfare spending.

Garfinkel and Smeeding make two other points about the size of the US welfare state. They point out that while many other countries rely heavily on government funding for retirement and health spending, the US relies more heavily on an employer-provided system. They essentially argue that it doesn't make sense to treat a system where the government taxes and spends as a "welfare state," but a system where government gives large tax incentives and regulates heavily as "not a welfare state." Here's their argument (citations omitted):

Finally, Garfinkel and Smeeding point out that saying the US has a small welfare state is based on statements about the size of welfare relative to GDP, but that if one looks just at the absolute size of the US welfare state on a per person basis, it is enormous.

The second question in the mini-quiz above is whether the US has always been a laggard in welfare state spending. Garfinkel and Smeeding point out that the US was historically a global leader in one kind of social spending: "throughout most of the 19th and 20th centuries the United States was a leader in the provision of mass public education." However, they also point out that in recent decades, other high-income countries have caught up (as I've also noted here, here, and here, for example). Here's their summary (again, citations omitted):

The third question in the mini-quiz was about whether the welfare state undermines productivity and growth. Garfinkel and Smeeding point out that in the big picture, all the high-income and high-productivity nations of the world have large welfare states; indeed, one can argue that growth rates for many high-income nations were higher in the mid- and late 20th century, when the welfare state was comparatively larger, than back in the 19th century when the welfare state was smaller. Indeed, improved levels of education and health are widely recognized as important components of improved productivity. As they write: "Furthermore, by reducing economic insecurity, social insurance and safety nets make people more willing to take economic risks."


"Of course, many other factors besides social welfare spending have changed in the past 150 years. But, as we have seen, welfare state spending is now very large relative to the total production of goods and services in all advanced industrialized nations. If such spending had large adverse effects, it is doubtful that growth rates would have been so large in the last 30 years. The crude historical relationship suggests, at a minimum, no great ill effects and, more likely, a positive effect. The burden of proof clearly lies on the side of those who claim that welfare state programs are strangling productivity and growth. If they are right, they need to explain not only why all rich nations have large welfare states, but more importantly why growth rates have grown in most rich nations as their welfare states have grown larger."