The Eurozone Crisis: Crystalizing the Narrative

The economy of the eurozone makes the US economy look like a picture of robust health by comparison. Richard Baldwin and Francesco Giavazzi have edited The Eurozone CrisisA Consensus View of the Causesand a Few Possible Solutions, a VoxEU.org book from the Centre for Economic Policy Research in London. The book includes a useful introduction from Richard Baldwin and Francesco Giavazzi, followed by 14 mostly short and all quite readable essays.

As a starting point for non-European readers, consider that the unemployment rate across the 19 eurozone countries is still well into double-digits at 11%. 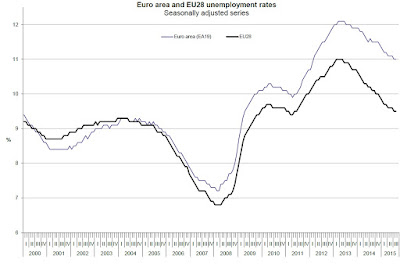 While the US economy has experienced disappointingly sluggish growth after the end of the Great Recession in 2009, the eurozone economy experienced a follow-up recession through pretty much all of 2011 and 2011, and since then has experienced growth that is sluggish even by US standards. 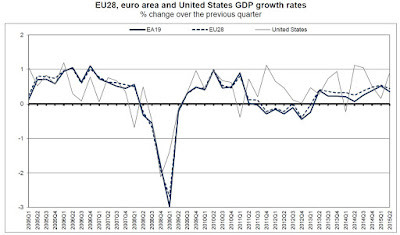 What went wrong in the eurozone? Here's the capsule summary from the introduction by Baldwin and Giavezzi:

The core reality behind virtual every crisis is the rapid unwinding of economic imbalances. ... In the case of the EZ [eurozone] crisis, the imbalances were extremely unoriginal. They were the standard culprits that have been responsible for economic crises since time immemorial – namely, too much public and private debt borrowed from abroad. Too much, that is to say, in relation to the productive investment financed through the borrowing.

From the euro’s launch and up until the crisis, there were big capital flows from EZ core nations like Germany, France, and the Netherland to EZ periphery nations like Ireland, Portugal, Spain and Greece. A major slice of these were invested in non-traded sectors – housing and government services/consumption. This meant assets were not being created to help pay off in the investment. It also tended to drive up wages and costs in a way that harmed the competitiveness of the receivers’ export earnings, thus encouraging further worsening of their current accounts.

When the EZ crisis began – triggered ultimately by the Global Crisis – cross-border capital inflows stopped. This ‘sudden stop’ in investment financing raised concerns about the viability of banks and, in the case of Greece, even governments themselves. The close links between EZ banks and national governments provided the multiplier that made the crisis systemic.

Importantly, the EZ crisis should not be thought of as a sovereign debt crisis. The nations that ended up with bailouts were not those with the highest debt-to-GDP ratios. Belgium and Italy sailed into the crisis with public debts of about 100% of GDP and yet did not end up with IMF programmes, while Ireland and Spain, with ratios of just 40%, (admittedly kept artificially low by large tax revenues associated with the real estate bubble) needed bailouts. The key was foreign borrowing. Many of the nations that ran current account deficits – and thus were relying of foreign lending – suffered; none of those running current account surpluses were hit.

In working through their detailed explanation, here's are a few of the points that jumps out at me. When the euro first came into widespread use in the early 2000s, interest rates fell throughout the eurozone and all the eurozone countries were able to borrow at the same rate; that is, investors were treating all governments borrowing in euros as having the same level of risk--Germany the same as Greece. Here's a figure showing the falling costs of government borrowing and the convergence of interest rates across countries. 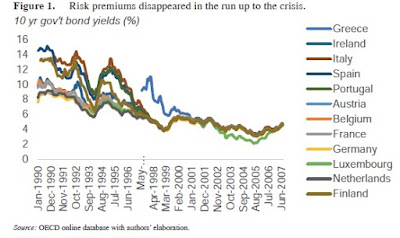 The crucial patterns of borrowing that emerged were not about lending from outside Europe to inside Europe, but instead about lending between the countries of the eurozone, a pattern which strongly suggests that the common currency was at a level generating ongoing trade surpluses and capital outflows from some countries, with corresponding trade deficits and capital inflows for other countries. Baldwin and Giavezzi write:


To interpret the individual current accounts, we must depart from an essential fact: The Eurozone’s current account as a whole was in balance before the crisis and remained close to balance throughout. Thus there was very little net lending from the rest of the world to EZ countries. Unlike in the US and UK, the global savings glut was not the main source of foreign borrowing – it was lending and borrowing among members of the Eurozone. For example, Germany’s large current account surpluses and the crisis countries deficits mean that German investors were, on net, lending to the crisis-hit nations – Greece, Ireland, Portugal and Spain (GIPS). 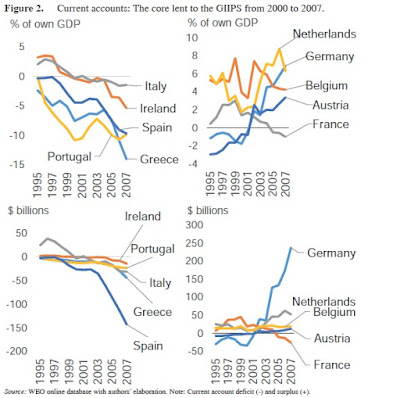 Sitting here in 2015, it seems implausible that policymakers around Europe weren't watching these emerging imbalances with care and attention, and planning ahead for what actions could be taken with regard to government debt, private debt, banking reform, central bank lender-of-last-resort policy, and other issues. But of course, it's not uncommon for governments to ignore potential risks, and only make changes after a catastrophe has occurred.   Baldwin and Giavezzi note wryly:


It is, ex post, surprising that the building fragilities went unnoticed. In a sense, this was the counterpart of US authorities not realising the toxicity of the rising pile of subprime housing loans. Till 2007, the Eurozone was widely judged as somewhere between a good thing and a great thing.

And what has happened in the eurozone really is an economic catastrophe. Baldwin and Giavezzi conclude:


The consequences were and still are dreadful. Europe’s lingering economic malaise is not just a slow recovery. Mainstream forecasts predict that hundreds of millions of Europeans will miss out on the opportunities that past generations took for granted. The crisis-burden falls hardest on Europe’s youth whose lifetime earning-profiles have already suffered. Money, however, is not the main issue. This is no longer just an economic crisis. The economic hardship has fuelled populism and political extremism. In a setting that is more unstable than any time since the 1930s, nationalistic, anti-European rhetoric is becoming mainstream. Political parties argue for breaking up the Eurozone and the EU. It is not inconceivable that far-right or far-left populist parties could soon hold or share power in several EU nations. Many influential observers recognise the bind in which Europe finds itself. A broad gamut of useful solutions have been suggested. Yet existing rules, institutions and political bargains prevent effective action. Policymakers seem to have painted themselves into a corner.

For those looking for additional background on eurozone issues, here are links to a few previous posts on the subject: