There's a considerable argument over federal borrowing. Were the deficits during the Great Recession too small to help boost the recovery, or too large? Were the deficits reduced too quickly, or not quickly enough? Are the ongoing deficits too large, or too small? That gentle "whoosh" you hear in the distance is me sidestepping those questions in this post. (For the record, I've taken the unpopular position that the path of federal borrowing was approximately correct during the Great Recession and its aftermath, thus managing to prove yet again the old adage that if you try to stand in the middle of the road, you'll get hit by traffic from both directions.)

Here, I want to offer the mild suggestion that debates about what budget deficits should be, or should have been, might be usefully informed by the path they have actually taken, and where they are headed. Here's the quick summary from the "Budget and Economic Outlook: 2016-2026," just released by the Congressional Budget Office.  Lots more detail on spending and taxes is available in the report.

Here's the path of federal budget deficits over time, and the "baseline" projections for the next 10 years, which assume that existing laws and rules relating to the budget will remain in place. The deficits are expressed as a share of the GDP--that is, relative to the size of the overall economy. 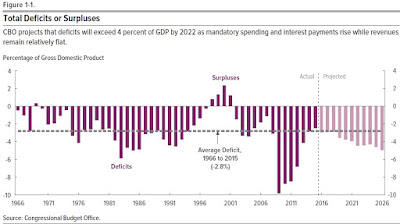 And here's the path of the debt/GDP ratio over time. The deficit is the amount borrowed by the federal government in a given year. The debt is the accumulation of borrowing over time. Again, it is expressed relative to GDP.

When mulling over appropriate size of deficits in the next few years, here are a couple of points to keep in mind.

1) As noted earlier, the CBO estimates are "baseline" forecasts, which means that if Congress has passed a law saying that spending will be reduced or certain taxes will be raised three or five or ten years into the future, the CBO assumes that these changes will actually happen. However, the CBO recognizes that Congress has a propensity to play games by passing budgets that project smaller deficits in the future through tax and spending policies that don't actually arrive. Thus, CBO also offers some "alternative" forecasts if some of these changes that are part of current law don't actually happen.

For example, the CBO forecast for 2020 is for a deficit of $810 billion. But this assumes that certain automatic future spending reductions in the 2011 Budget Control Act are actually enforced. If these cuts are not enforced, the deficit would be $97 billion higher in 2020. As another example, there is a rule in the tax code allowing for "expensing" of certain business investments, which means that a firm can count the entire cost of an investment in the year the spending happens, rather than depreciating the investment over time. If that expensing provision in tax law is extended into the future at a 50% rate, the projected deficit for 2020 would be an additional $52 billion larger. Bottom line: the "baseline" deficit estimate may be an underestimate, because it is based on a willingness of Congress to make some tough decisions in the future.