Snapshots and Visualizations of the Global Economy

For me, figures based on data about the global economy are like reliable sources of indirect light in a room where I'm working. Even when they are out of view, or when I'm not thinking about them explicitly, they shed some light on whatever the topic of my work is that day. For example, I recently ran across this breakdown of world GDP by country on the cost information website "How Much" in the short article, "One Diagram That Will Change the Way You Look At the US Economy" (July 21, 2015).

The country share of GDP (using market exchange rates to convert national currency values) is shown by the dark like. The lighter subdivisions within each country show the share of the economy that is services (darker area), manufacturing (medium area), and agriculture (lighter area). The color scheme differentiates continents, as the key to the figure shows.

Here's a quick collection of some other global economy figures that have appeared on this blog during the last year or two. If you want more detailed commentary about the figures and their sources, you can check at the original blog post.

Here's a different representation of world GDP, this one from the World Bank's International Comparison project. The horizontal axis shows population for various countries. The vertical axis shows per capita GDP. Thus, the area for each country (per capita GDP multiplied by population) gives the size of the country's economy.  The original post was "GDP Snapshots from the International Comparison Project" (May 9, 2014), 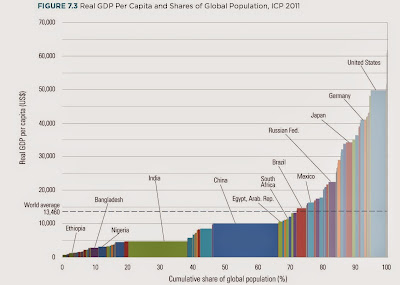 This is a similar figure with population and per capita GDP from a McKinsey Global Institute report at "Global Economic Growth: All Productivity, All the Time"  (January 20, 2015). However, this figure shows the distribution for 1964 and also the distribution 50 years later in 2014, thus illustrating the rise in population, standard of living, and the size of the world economy over those 50 years. 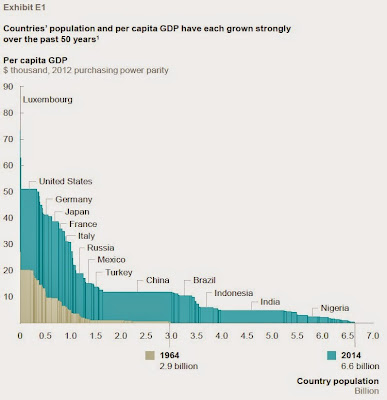 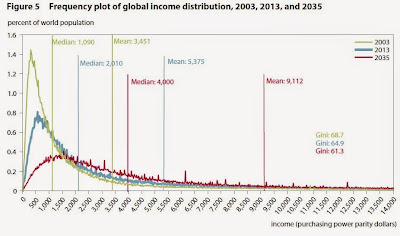 Over the last couple of centuries, a common pattern has been that the high-income economies were also the faster-growing and largest economies. But over the last few decades, that pattern has been changing. The consulting firm PricewaterhouseCoopers estimates that by 2050, the six largest economies in the world will be, in order, China, India, United States, Indonesia, Brazil, Mexico. Thus, we are entering a world "When High GDP No Longer Means High Per Capita GDP" (October 20, 2015). Here's a figure showing GDP in per capita terms for some large high-income countries the also a group of lower-income emerging market countries. By 2050, economic growth will make many of the countries on the right-hand side of this figure among the largest in the world. But even after several more decades of faster-than-global-average growth, their per capita GDP will not have yet caught up to the levels n the US and other high-income countries.

Finally, here's a depiction of the distribution of global wealth from Credit Suisse in "Snapshots of Global Wealth" (October 15, 2014). If you have more than $100,000 in wealth (and yes, your housing equity and your retirement account are included here), then you are sitting above the 90th percentile of the world wealth distribution. If you have more than $1,000,000 in wealth (or if you plan to end up at that level of wealth by the time you reach retirement age), you are in the 99th percentile of world wealth. 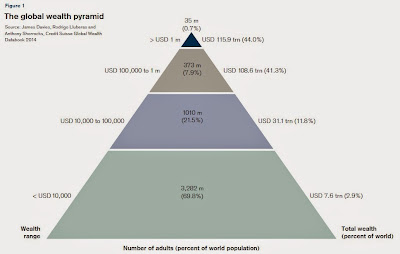 Posted by Timothy Taylor at 8:31 AM