Unemployment is Bottoming Out, So What's Next?

The unemployment rate, now hovering around 5%, has dropped a lot more quickly during the last three years than mainstream forecasters predicted. For example, back in February 2013, the Congressional Budget Office was forecasting that the unemployment rate would be 7.1% in 2015 and 6.3% in 2016. As another example, all participants in the meetings of the Federal Reserve Open Market Committee present their forecast of economic conditions looking ahead. In the "Summary of Economic Projections" prepared for its December 2012 meeting, the predicted range for the unemployment rate in 2015 was 5.7% to 6.8%. To put it another way, the unemployment rate in the last three years has fallen by more than even the most optimistic member of the Federal Reserve Open Market Committee believed was likely.

But now, the unemployment rate is close to bottoming out. The Congressional Budget Office forecast for January 2016 is that the unemployment rate will fall to 4.5% in 2016 and 2017, but will then rise back to 5.0% in the long run. In the Federal Reserve's "Summary of Economic Projections" for its meeting of December 16, 2015,  the median prediction is that unemployment will fall to 4.7% for the next three years from 2016 to 2018 but in the long run will rise back to 4.9%.


Other measures of the labor market also suggest that it is very close to returning to pre-recession levels. For example, here's a figure from the latest Job Openings and Labor Turnover Survey that came out in mid-January, which is a survey with a rotating sample of about 16,000 firms run by the US Bureau of Labor Statistics. The figure shows that the pace of hiring has returned almost to pre-recession levels, and that job openings have surged faster. The number of workers who quit typically drops during a recession, because it's harder to find an alternative job, so the rising number of "quits" is a signal of a healthier labor market. 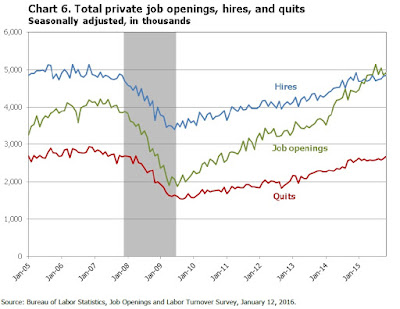 In short, while the unemployment rate may dip a bit lower or bounce a bit higher, the long fall in the unemployment rate from its peak of 10% in October 2009 is mostly finished.  So what's the next step in looking for whether the labor market continues to improve? There are two broad metrics that come to mind. Are wages starting to rise more quickly, as one would expect in a tighter labor market? and what's the share of Americans who have jobs?

There are some early and very preliminary signs that wages might finally be starting to rise. For example, here's a figure from the "US Economy in a Snapshot" published earlier in January 2016 by the Federal Reserve Bank of New York. 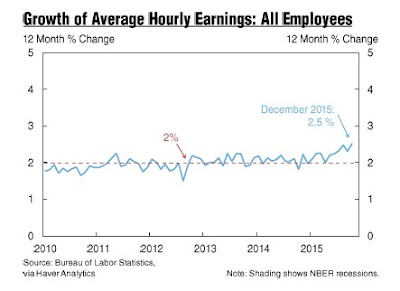 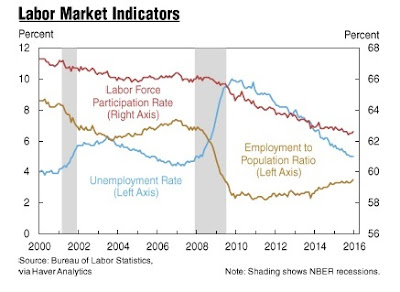 The downward trend in the labor force participation rate started well before the recession, and as I've discussed on this website before (for example, here and here), the long-term trend reflects factors like young adults being more likely to attend school, low-wage workers having fewer job opportunities, and the baby boom generation reaching retirement age.  This long-term fall in the labor force participation rate accelerates during the Great Recession, but more recently, it the rate of decline has slowed again.