Multipolarity: The Next Step After Globalization?

The world economy during the last few decades has experienced "globalization," a broad and admittedly vague term which refers among other factors to a rise in the ratio of world exports to world GDP, as well as the pattern that an ever-rising share of global economic output is happening in the "emerging markets" rather than in the traditional high-income countries. But since the Great Recession, there has been a slowdown in the rise of global trade. If globalization falters, what might evolve next? The Credit Suisse Research Institute asks in a September 2015 report: "The End of Globalization or a More Multipolar World?" The report makes this argument:


Our sense is that the world is currently in a benign transition from full globalization to multipolar state, though this is not complete. ... We find evidence of region-specific trends in economic, social and technological factors that are distinct from aggregate world trends. ... In this context, we are increasingly mindful of George Orwell’s 1984, where he divided the world into three regions – Oceania, East Asia and Eurasia on the basis of economic power and form of government. Although it requires some conceptual shoehorning we could well fit the major countries of the world into the following categories: Oceania (USA, Canada and Latin America), Eurasia (Europe, the Middle East and Russia), East Asia (Africa, Asia and the Pacific economies). Some countries like the UK, Japan and Australia could just as easily fit in two categories. In today’s world, Orwell’s classification is not a ‘clean’ one but the three broad regions he has set out give a sense as to how a multipolar world might evolve at a high level.

What is some of the evidence for the movement to a multipolar world economy? One chunk of evidence is a de-emphasis of the role of international organizations like the World Trade Organization in favor of regional and preferential trade agreements, along with bilateral investment treaties. Here are some trends in each of these areas. 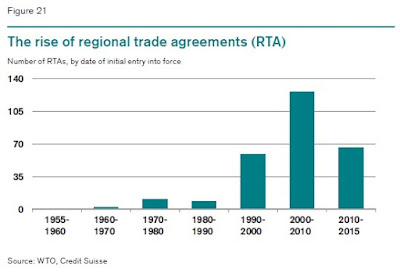 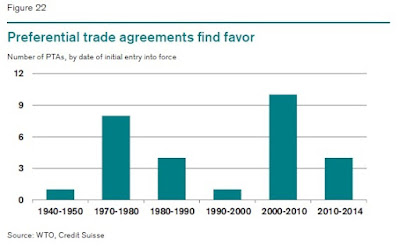 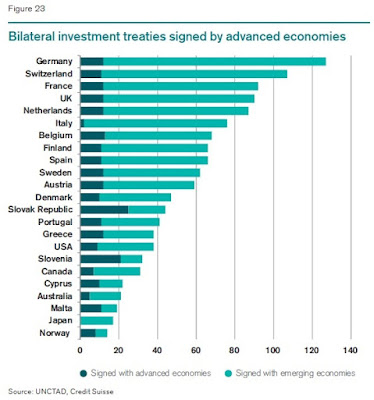 When it comes to international finance, the world economy still operates on more of a globalized US dollar standard than on a multipolar standard that would give greater weight to, say, the euro and the Chinese renminbi. This doesn't seem likely to change in the short run, given the economic turmoil in China and across the euro zone. But in the medium- and long-run, it seems very likely that this will change. The figure below offered a longer-run perspective. When it comes to currency reserves, largely held at central banks, the US dollar still rules--but it's a lower share than back in the 1970s, and it's not a rising share.

The Credit Suisse report looks at a number of other dimensions of a multipolar world, like whether companies are continuing to increase their investments across national borders at the same rate, and the levels at which issues of governance and conflict are happening. Michael Sullivan summarizes these findings in this way:


"Our analysis of corporate investment and revenue growth shows that globalization remains intact in terms of consumption and marketing patterns, there appears to have been a retrenchment in cross-border investment by corporates. ... We read these results as pointing towards a more multipolar world where companies continue to sell across borders but are more cautious in investing across them.

"In terms of governance, the impetus provided to the spread of democracy by globalization looks to have reached a limit, with less democratic forms of government being perceived to produce economic success and new regional institutions replacing the activities of world ones. ... Geopolitically, conflict now takes place more within countries and regions, than between countries.

"The world is increasingly undercut by faultlines in terms of religion, climate change, language, military development and indebtedness to name a few."

If a multipolar world is coming, it behooves the United States to consider what our core alliance would look like. I've posted here before on "The North American Vision" (November 5, 2014) of stronger US ties with Canada and Mexico, but I suspect that broad vision is should be expanded to include Latin America as well.

Finally, here's an angle on the very long-run evolution of the global economy: a breakdown of what share of the global economy was represented by different countries or regions over the last millenium. Maybe the easiest way to read this figure is to start from the bottom dark green area, representing China, and then work your way up through the other countries in the order they appear in the key.

About 1,000 years ago, the world economy was dominated by China and India.  You can see their shares of global output dwindling over time, and the gradual rise of the United States (the second shaded area from the bottom), along with the growing importance of Japan, other countries in Asia, and Latin America during much of the 20th century. In just the last few decades, China's importance grows substantially and India's importance grows noticeably, too. Indeed, a few decades down the road we could be headed back to a global economy in which the two largest players are, again, China and India.