In his 1971 State of the Union Address, President Richard Nixon launched what came to be known as the War on Cancer:


“I will also ask for an appropriation of an extra $100 million to launch an intensive campaign to find a cure for cancer, and I will ask later for whatever additional funds can effectively be used. The time has come in America when the same kind of concentrated effort that split the atom and took man to the moon should be turned toward conquering this dread disease. Let us make a total national commitment to achieve this goal.”

And now, 45 year later in the 2016 State of the Union address, President Barack Obama is relaunching the War on Cancer:


"Last year, Vice President Biden said that with a new moonshot, America can cure cancer. Last month, he worked with this Congress to give scientists at the National Institutes of Health the strongest resources that they’ve had in over a decade. So tonight, I’m announcing a new national effort to get it done. And because he’s gone to the mat for all of us on so many issues over the past 40 years, I’m putting Joe in charge of Mission Control. For the loved ones we’ve all lost, for the families that we can still save, let’s make America the country that cures cancer once and for all."

So how did that first War on Cancer turn out? At the tail end of 2008, just before President Obama took office, David Cutler took a stab at answering that question in "Are We Finally Winning the War on Cancer?" which appeared in the Fall 2008 issue of the Journal of Economic Perspectives (22:4, pp. 3-26). Here's a figure showing the mortality rate from cancer over time. 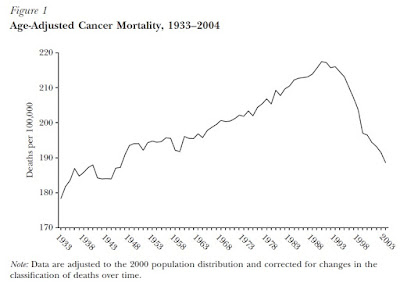 As Cutler reports, spending on cancer research and treatment did rise steadily after Nixon's speech at about 4-5% per year. But as the figure shows, cancer death rates kept rising for a time as well, at about 8% per year during the 1970s and 1980s. By 1997, the New England Journal of Medicine ran an article noting these trends called "Cancer Undefeated."  Perhaps inevitably, that article was soon followed by a sharp decline in cancer mortality. Apparently, Obama is re-enlisting in a war on cancer that has been going pretty well for a couple of decades.

But the War on Cancer has been fought with several different tools--and biomedical research on a "cure for cancer" isn't the biggest one. Cutler focuses on four main types of cancer: lung, colorectal, female breast, and prostate. After reviewing the evidence on each, he wrote:

"[B]ehaviors, screening, and treatment advances for the four cancers I consider were each important in improved cancer survival. Together, they explain 78 percent of the reduction in cancer mortality between 1990 and 2004. Thirty-five percent of reduced cancer mortality is attributable to greater screening—partly through earlier detection of disease, and partly through removal of precancerous adenomas in the colon and rectum. Behavioral factors are next in importance, at 23 percent; the impact of smoking reductions on lung cancer is the single most important factor in this category. Finally, treatment innovation is third in importance, accounting for 20 percent of reduced mortality.

"The relative importance of these different strategies seems surprising, but it is easily understandable. Despite the vast array of medical technologies, metastatic cancer remains incurable and fatal. The armamentarium of medicine can delay death, but cannot prevent it. Thus, technologies in metastatic settings have only limited effectiveness. Far more important is making sure that people do not get cancer in the first place (prevention) and that cancer is caught early (screening), when it can be successfully treated."

From this perspective, emphatic calls for a "cure for cancer" highlight a bias in US medicine, in favor of later-stage interventions which are often at high-cost, rather than early stage interventions of prevention and early screening that may often happen pretty much outside the health care system, but have the potential save many more lives at much lower cost.

David H. Howard, Peter B. Bach, Ernst R. Berndt, and Rena M. Conti looked at "Pricing in the Market for Anticancer Drugs" in the Winter 2015 issue of the Journal of Economic Perspectives (29:1, pp. 139-62). As I've discussed on this blog, before a new anti-cancer drug is approved, various clinical trials and studies are done, and these studies provide an estimate of the median expected extension of life as a result of using the drugs. Then based on the market price of the drug when it is announced, it's straightforward to calculate the price of the drug per year of life gained. Their calculations show that back in 1995, new anti-cancer drugs reaching the market were costing about $54,000 to save a year of life. By 2014, the new drugs were costing about $170,000 to save a year of life. This is an increase in cost per year of life saved of roughly 10% per year.

As both Nixon and Obama can attest, calling for a "cure for cancer" with an analogy to putting a person on the moon has been political magic for 45 years now. But if the "cure for cancer" rhetoric creates the expectation of a magic pill that lets everyone go back to smoking cigarettes again, I fear that it is both missing the point and even raising false hopes for cancer patients and their families. I'm pretty much always a supporter of additional research and development, and like everyone else, I hear anecdotes (which I cannot evaluate) about how some great new anti-cancer drugs are already in the research pipeline. But a focus on developing more extremely expensive anti-cancer drugs that often provide only very limited gains in average life expectancy (in a number of cases, only a few months) shouldn't be the primary approach here. At least for the near-term and probably the medium-term, too,  primary tools that can keep cancer mortality on a downward trends are more likely to be prevention and early detection, along with ongoing improvements in the health-effectiveness and cost-effectiveness of treatment, not a "moonshot" for a cure.

Full disclosure: I've been Managing Editor of the Journal of Economic Perspectives since 1987, and so part of my paycheck came from working to publish the two articles mentioned here.