Environment vs. Economy: A Shift in American Opinion

Consider how you would answer this question from the Gallup poll organization: "With which one of these statements about the environment and the economy do you most agree--protection of the environment should be given priority, even at the risk of curbing economic growth (or) economic growth should be given a priority, even if the environment suffers to some extent?" James W. Boyd and Carolyn Kousky show the results when Gallup surveyed Americans on this question in "Are We Becoming Greener? Trends in Environmental Desire," which appears in the Winter 2016 issue of Resources, published by Resources for the Future.

As the figure shows, when this question was first being asked in the mid-1980s and through the 1990, a typical answer was that two-thirds or more of American gave priority to the environment. But there is a substantial shift in the answers from about 2000 up through 2004. The proportions giving each priority shift to roughly half and  half; indeed, during the Great Recession and its aftermath, people put a higher priority on the economy than on the environment. 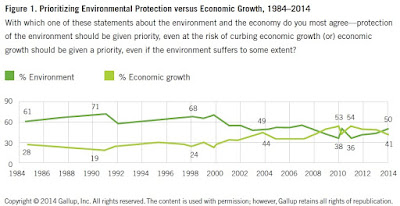 Of course, interpreting poll results is a tricky business, and Boyd and Kousky offer a useful discussion of all sorts of interpretations one might place on these results. Perhaps those taking the poll are interpreting not whether they value environmental protection steps taken in the past, but whether they think additional steps should be a high priority moving forward. Perhaps the term "environmental protection" has over time become equated in some people's minds with "big government," and so the results are showing a rise in negative feelings about government. Perhaps in the aftermath of the dot-com recession of 2001, Americans started to feel more concerned about future economic prospects.

The question of what people "prefer" is a delicate one for economists, who try to make a logical and analytical separation between what people's preferences and what they end up choosing. For example, imagine that people have a certain preference for coffee, which means that given a certain  price for quantity, they will demand a specific quantity of coffee. But now imagine that poor weather damages the coffee crop, the price of coffee rises, and people choose to purchase a lower quantity of coffee as a result. An economist would argue that even though people are buying a reduced quantity coffee, their "preference" for coffee didn't change. Instead, the change in what was bought and sold in the market was the result of a change in growing conditions for coffee. For an economist, a change in preference would involve buying more coffee at the same market price (and the same income level, and holding other factors constant, too). In the present context, people may perceive that the cost of environmental protection has been rising over time, but given a specific environmental protection policy with a high ratio of benefits/costs, they might favor it.

Posted by Timothy Taylor at 8:40 AM