Financial Risks: Views from the Office of Financial Research

The Wall Street Reform and Consumer Protection Act of 2010, commonly known as the Dodd-Frank Act, set up an Office of Financial Research. Its website describes its purpose this way: "The Office of Financial Research (OFR) helps to promote financial stability by looking across the financial system to measure and analyze risks, perform essential research, and collect and standardize financial data." In December 2015, the OFR published its Financial Stability Report for 2015.

The report emphasizes three main risks facing the US economy: 1) credit risks for US nonfinancial businesses and emerging markets; 2) the behaviors encouraged by the ongoing environment of low interest rates; and 3) situations in which financial markets are not resilient, as manifested in shortages of liquidity, run and fire-sale risks, and other areas. Here are some thoughts from the report.


"First and most important, credit risks are elevated and rising for U.S. nonfinancial businesses and many emerging markets. ... In 2015, U.S. nonfinancial business debt continued to grow rapidly, fueled by highly accommodative credit and underwriting standards. The ratio of that debt to gross domestic product has moved above pre-crisis highs, and corporate leverage continues to rise. So far, distress in U.S. credit markets has been largely limited to the lowest-rated debt issuers and the energy and commodity industries. However, that distress may spread, because investors now appear to be reassessing the credit and liquidity risks in these markets. ... The combination of higher corporate leverage, slower global growth and inflation, a stronger dollar, and the plunge in commodity prices is pressuring corporate earnings and weakening the debt-service capacity of many U.S. and emerging market borrowers. A shock that significantly further impairs U.S. corporate or emerging market credit quality could potentially threaten U.S. financial stability."

Here's a figure showing growth in outstanding US nonfinancial corporate bonds, which as a share of GDP have risen back close to where they were just before the 2008 financial crisis. The report also notes: "“Covenant-lite” loans, which contain less legal protections for creditors, accounted for approximately two-thirds of institutional leveraged loan volumes this year, and the share of low-rated debt with weak covenants has continued to increase ..." 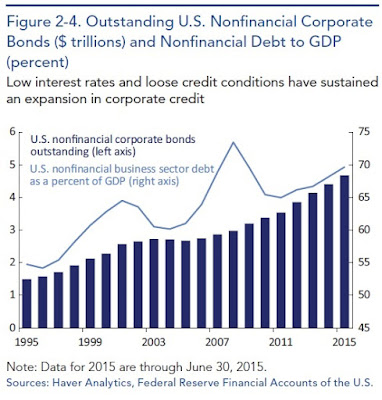 "Another key source of risk is the eventual normalization of Federal Reserve monetary policy. Past U.S. monetary tightening cycles have been associated with increased volatility in corporate bond markets and, in some cases, increased spreads ... The next cycle could be more destabilizing for corporate debt markets, given that it will unwind an extraordinary period of low interest rates and associated yield-seeking investor behavior. U.S. corporate bond markets may face an exodus of these investors as yields on safer instruments increase. ... The fact that U.S. nonfinancial business debt has expanded so rapidly since the financial crisis suggests that even a modest default rate could lead to larger absolute losses than in previous default cycles."

These issues also spill over into emerging market debt. Here's a figure showing the level of corporate debt (not including government or household debt) in some emerging markets. Speaking of this debt in emerging markets, the report notes:


"A significant deterioration in the liquidity of large nonfinancial corporates could create financial difficulties for domestic banks and governments. In some emerging market countries, more than half of banks’ outstanding loans are to corporate borrowers, leaving many banking sectors vulnerable to losses in the event of broad-based corporate distress. In addition, a large share of emerging market corporate external bonds is issued by quasi-governmental borrowers, meaning that corporate distress could also activate contingent or legal liabilities for some governments, with associated effects on government debt markets. This is a particular problem for countries where the central government has less fiscal space, such as Brazil. Increased dependence on foreign exchange-denominated debt is also a concern, given that depreciating currencies increase the difficulty of servicing the debt." 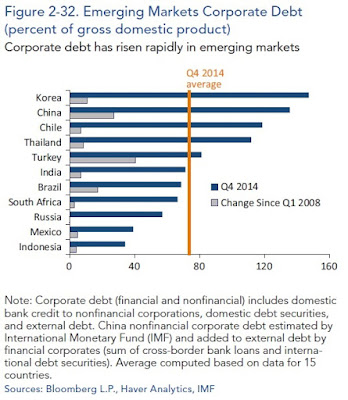 "Second, the low interest rate environment may persist for some time, with associated excesses that could pose financial stability risks. ... The persistence of low rates contributes to excesses that could pose financial stability risks, including investor reach-for-yield behavior, tight risk premiums in U.S. bond markets, and, as noted, the high level and rapid growth of U.S. nonfinancial business debt. ... The duration of investors’ U.S. bond portfolios remains at historic highs ..., increasing their exposure to interest rate risk. ..."

"Third, although the resilience of the financial system has improved significantly in the past five years, it is uneven. Since the financial crisis, regulatory reforms and changes in risk management practices have strengthened key institutions and markets critical to financial stability. Yet, existing vulnerabilities persist and some new ones have emerged. Financial activity and risks continue to migrate, challenging existing regulations and reporting requirements. Market liquidity appears to be episodically fragile in major U.S. financial markets, diminishing sharply under stress. Run and fire-sale risks persist in securities financing markets. Interconnections among financial firms are evolving in ways not fully understood, for example, in the growing use of central clearing. ... The financial system is highly complex, dynamic, and interrelated, making it exceedingly challenging to monitor developments in every corner of the system and adequately assess the probability and magnitude of all important risks. ..."

"Funding conditions remain broadly stable, though market liquidity episodically appears to be fragile — an amplifier of financial stress. This fragility was evident in the 2010 U.S. equity flash crash, the 2013 U.S. Treasury market sell-offs, the October 2014 Treasury “flash rally,” and other episodes ... Runs in short-term wholesale funding markets were a key source of systemic stress during the financial crisis. Although progress has been made to address this vulnerability, run risk persists in these markets years later. ... Banks’ reliance on repo financing has diminished and concentration risks have eased as these institutions have diversified their funding sources and reduced their client-financing operations. Broker-dealers have also reduced their reliance on repo financing, particularly in net terms, but overall these firms remain highly dependent on such financing and at risk of runs in a stress scenario ..."

Of course, saying something is a "risk" doesn't mean that disaster is imminent, but rather that attention on the topic should be elevated. I'd expect that some of these topics--not sure which ones!--will be the stuff of headlines in the next year or so.