One of the signs of a well-functioning market is that prices for very similar goods or services are much the same in different places. For example, if a specific television model cost five times as much in one city as in another nearby city, it would be a pretty clear sign that something in the market was malfunctioning. Similarly, if an insurance company noticed that drivers in one urban area are experiencing five times as many accidents as seemingly similar drivers in another urban area, something is likely to be wrong. When it comes to health care, this kind of evidence suggests that markets are not working well. Some recent persuasive evidence comes from "The Price Ain’t Right? Hospital Prices and Health Spending on the Privately Insured," a December 2015 paper by Zack Cooper, Stuart Craig, Martin Gaynor, and John Van Reenen, published by a research collaboration called the Health Care Pricing Project.

The authors have access to idata that "includes insurance claims for nearly every individual with employer-sponsored coverage from Aetna, Humana, and UnitedHealth," which is 88 million people or "27.6 percent of individuals with private employer-sponsored insurance in the US between 2007 and 2011." To my knowledge, this kind of big data showing geographically detailed data on transaction prices in hospitals and total health care spending for those with private insurance hasn't previously been available. Most previous work on health care prices and spending in different geographic areas has instead used Medicare data. Here are four of their main findings (citations omitted):


"To illustrate the point, policy-makers have identified Grand Junction, Colorado as an exemplar of health-sector efficiency based on analyses of Medicare data. In 2011, we find that Grand Junction does indeed have the third lowest spending per Medicare beneficiary among HRRs. However, in the same year, Grand Junction had the ninth highest average inpatient prices and the forty-third highest spending per privately insured beneficiary of the nation’s 306 HRRs. Likewise, we find that other regions, such as Rochester, Minnesota, and La Crosse, Wisconsin, which have also received attention from policy-makers for their low spending on Medicare, are among the highest spending regions for the privately insured."

For illustration, here's a graph showing the distribution of Medicare spending per patient on the horizontal axis, and private insurance spending per patient on the vertical axis. The points represent different geographic areas. Notice there is every possible mix here: high on both, low on both, high on one and low on the other. Clearly, it could potentially be misleading to draw conclusions about the overall operation of US health care spending or prices across geographic regions based on Medicare data alone. 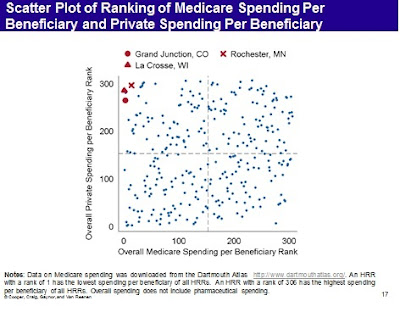 "Second, for the privately insured, hospital transaction prices play a large role in driving inpatient spending variation across HRRs." That is, in the geographic areas when private insurance spending is higher, the main underlying reason is not that patients are receiving a higher quantity of care, but instead that they (and their insurance companies) are paying higher prices for specific care that is received.

"Finally, we describe some of the observable factors correlated with hospital prices. Measures of hospital market structure are strongly correlated with higher hospital prices. Being for-profit, having more medical technologies, being located in an area with high labor costs, being a bigger hospital, being located in an area with lower income, and having a low share of Medicare patients are all associated with higher prices. However, even after controlling for these factors and including HRR fixed effects, we estimate that monopoly hospitals have 15.3 percent higher prices than markets with four or more hospitals. Similarly, hospitals in duopoly markets have prices that are 6.4 percent higher and hospitals in triopoly markets have prices that are 4.8 percent higher than hospitals located in markets with four or more hospitals. While we cannot make strong causal statements, these estimates do suggest that hospital market structure is strongly related to hospital prices."

The overall message here is to provide clear documentation of some patterns that most of us already strongly suspected. Health care prices aren't being set in a well-functioning competitive market. Some geographic markets just lack competition in health care. But in many others, prices for hospital services are being negotiated in ways that result in big variations between geographic areas--like prices for a given service in one place being a multiple of what it costs in other places. In turn, these different prices being charged are linked to big differences in spending across geographic areas. Moreover, all of this is happening in a setting with potentially large cross-subsidies--potentially running in either direction--between private health insurance and public health insurance programs like Medicare.  It's all part of the reason why designing policies to slow the rise in health care spending is so difficult.
Posted by Timothy Taylor at 8:00 AM