Do people have a tendency to marry those with similar educational and other background to themselves? Social scientists, with their gift for turning simple ideas into jargon, call this "homogamy." Conversely, if people have a tendency to marry those with different educational or other background, social scientists would say that marriage is "heterogamous." At a given point in time, the question of whether marriage is homogamous or heterogamous reveals something about the degree of mixing across socioeconomic classes in society. Over time, a society with greater homogamy is likely to also have more inequality. W

Robert D. Mare compiles and presents evidence on "Homogamy in Two Gilded Ages: Evidence
from Intergenerational Social Mobility Data," in the Annals of the American Academy of Political and Social Science (January 2016, pp 117-139). (The journal is not freely available online, but many readers will have access through library subscriptions.) The earlier research on this subject looked at data going back to about 1940, and it produced measures of the extent to what proportion of marriages were between people with a similar education level which looked like this: 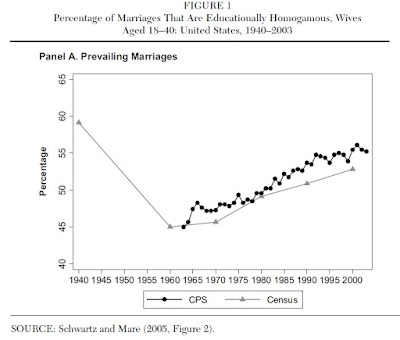 An obvious concern with this graph is what to make of the data for the single data point of 1940, based on Census data. Is there a reason why marriage homogamy might have dropped so much from 1940 to 1960? Or is there just something in the way that 1940 data was collected or tabulated that makes it not directly comparable to the later data? In this paper, Mare makes use of previously unutilized data data on what adults report about the marriages of their parents to extend this data back in time. He finds that there is indeed a downward pattern of marriage homogamy in the first half of the 20th century. 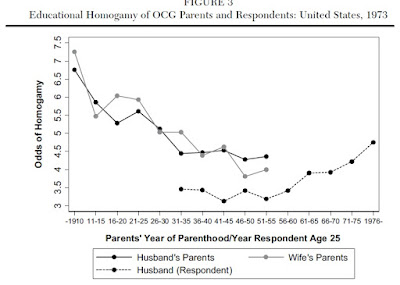 It's tricky and perhaps impossible to provide a single rigorous explanation of this U-shaped pattern of marriage homogamy that works equally well when homogamy goes from high to low and when it goes from low to high. But as Mare writes (citations omitted):


"Two broad sociodemographic trends that provide a context for assortative mating patterns are nonetheless worth noting. First, the comparatively low level of educational homogamy for young couples in the early 1950s coincides with the century’s lowest median age at first marriage. The median age at first marriage was approximately 26 for men and 22 for women in 1900, declined steadily to approximately 23 for men and 20 for women in 1950 and increased thereafter to approximately 27 for men and 25 for women in 2000. When couples marry early, one or both partners may have not yet completed their schooling or have only just left school. Although schools may structure marriage markets, couples who marry early may not, at the time of marriage, be able to take full account of the characteristics of their partners that are associated with their educational attainment. Conversely, when couples marry later, their preferences and opportunities for marriage may be more strongly based on the “realized” characteristics of their potential partners, which may, to a significant degree, be a result of their partners’ educational attainments. ...

"A second important trend is in the differential life chances associated with educational attainment, perhaps the most important of which are the economic returns to schooling. When individuals expect that earnings and income gaps between educational groups will be large during their adult years, they not only have a greater incentive to stay in school themselves, but also may place more weight on the educational attainments of prospective marriage partners. Conversely, if the economic gaps between educational attainment levels are small, factors other than schooling are more likely to govern
educational choice. During the latter half of the twentieth century and especially since the 1960s, the differences in earnings across individuals with varying amounts of education grew markedly, a trend that has a strong positive association with various indicators of educational assortative mating for couples who married during this era."

In short, social and economic inequality clearly interact with marriage homogamy. On one side, in a society with higher levels of inequality, people are less likely to interact with others from different socioeconomic groups in a way that would lead to heterogamy. On the other side, a society with more marriage homogamy will will be one in which those with higher wage and employment prospects are marrying each other. As a result, differences in household income will be larger. In addition, those households will have greater resources to invest in their children, which could lead to a greater persistence of inequality across generations. Many different factors affect marriage and economic inequality, but still, it seems unlikely to be a coincidence that homogamy was associated with greater inequality of the wage distribution and higher returns to schooling both early and late in the 20th century, while heterogamy was associated with a more equal distribution of income and lower returns to schooling in the middle of the 20th century.