Bangladesh has over 160 million people, which makes it the eighth most populous country in the world (just behind Pakistan and Nigeria, just ahead of Russia, Mexico, and Japan). I can't claim that I've been paying close attention to its economy, but I was nonetheless started to see that Bangladesh has shifted (in the World Bank's classification) from being a "low-income" to a "middle-income" country.

For some background on the economy of Bangladesh, the World Bank recently published BangladeshDevelopmentUpdate: Building on resilience (April 2018). Also, the IMF just published its regular overview report of the Bangladeshi economy (Bangladesh 2018 Article IV Consultation, IMF Country Report No. 18/158, June 2018). For example, the IMF writes:


"The Bangladesh economy continues to perform well with robust and stable growth. GDP growth has averaged more than 6.0 percent over the last decade, significantly lifting GDP per capita. Thanks to the ready-made garment (RMG) sector, the economy has diversified away from an agrarian to a more manufacturing-based economy, supported by abundant low-cost labor. Poverty has declined steadily and other social indicators have improved. As a result, Bangladesh is now emerging from a low-income to lower-middle income country status.  More recently, broadly sound macroeconomic policies have contributed to robust growth, stable inflation, moderate public debt, and greater resilience to external shocks."

Let's unpack that a bit. Here's a figure from the IMF report showing per capita GDP (left axis) and GDP growth in Bangladesh since 1991. 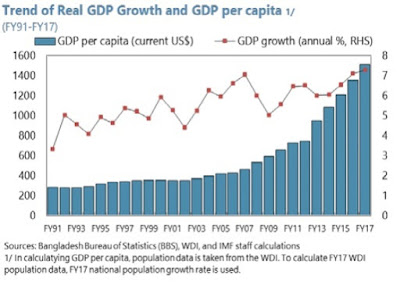 Here's one more from the World Bank showing the corresponding drop in poverty rates in Bangladesh. 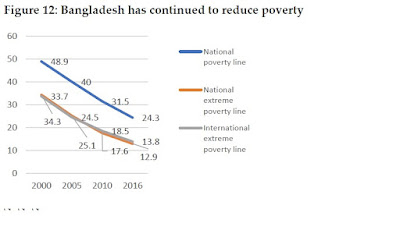 What are the underlying sources of the surge of growth? Here are comments from a couple of observers closer to the subject.  Kaushik Basu wrote an recent op-ed, "Why is Bangladesh Booming?" (May 1, 2018).  Sajeeb Wazed, who is an information technology adviser to the government of Bangladesh and the son of the prime minister (!) also listed some factors in a recent op-ed:

One issue seems to be a resurgence of the Bangladeshi garment industry. Wazed writes:

"Bangladesh also diversified its economy. Much of its early growth came from the ready-made garment industry. It earned its nickname: T-shirt maker to the world. But now, other industries are flourishing as well, including aquaculture and online services. Even the garment industry is diversifying. Along with basic shirts, Bangladesh also produces high-end sportswear that can be found in Europe’s trendiest stores."

"One notable point is that the main garment firms in Bangladesh are large—especially compared to those in India, owing largely to different labor laws. All labor markets need regulation. But, in India, the 1947 Industrial Disputes Act imposes heavy restrictions on firms’ ability to contract workers and expand their labor force, ultimately doing more harm than good. The law was enacted a few months before the August 1947 independence of India and Pakistan from British imperial rule, meaning that both new countries inherited it. But Pakistan’s military regime, impatient with trade unions from the region that would become Bangladesh, repealed it in 1958.

"Thus, having been born without the law, Bangladesh offered a better environment for manufacturing firms to achieve economies of scale and create a large number of jobs. And though Bangladesh still needs much stronger regulation to protect workers from occupational hazards, the absence of a law that explicitly curtails labor-market flexibility has been a boon for job creation and manufacturing success."

Both Basu and Wazed also mention greater gender equity in the workplace and in education as a boost to growth. Wazed writes: "The World Economic Forum validated the government’s success in these metrics last year when it ranked Bangladesh first in gender equality among South Asian nations for the second year in a row."

When it comes to the workplace, the progress in gender equity seems modest compared with how far there is to go. Here's a figure from the IMF showing male and female labor force participation across a range of countries, with Bangladesh highlighted. The countries of South Asia have an enormous untapped resource in the possibility of expanding women's labor force participation. 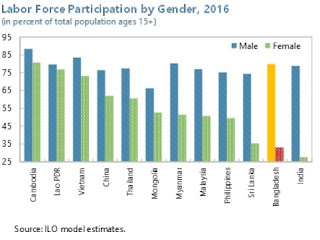 In education, the gains in Bangladesh, both overall and in term of gender equity, seem stronger. Wazed summarizes the evidence:

"Between 2000 and 2016, Bangladesh’s net enrollment rate at the primary school level increased from 80 percent to 99 percent. Secondary school enrollment also increased from 45 percent to 54 percent. In addition, Bangladesh achieved complete gender parity in primary education, with 99.4 percent of all girls attending school. Eighty-one percent of the students who enroll in first grade now reach fifth grade. As a result, the adult literacy rate hit a 12-year high last year and is expected to climb in the years ahead as access to educational opportunities expand across the country."

Finally,  Bangladesh has made a real effort to expand access to the financial sector and to digital technologies.

Basu writes: "The Bangladesh government also deserves credit for supporting grassroots initiatives in economic inclusion ... Among Bangladeshi adults with bank accounts, 34.1 percent made digital transactions in 2017, compared to an average rate of 27.8 percent for South Asia. Moreover, only 10.4 percent of Bangladeshi bank accounts are “dormant” (meaning there were no deposits or withdrawals in the previous year), compared to 48 percent of Indian bank accounts."

Wazed writes: "A country of 163 million people, Bangladesh has more than 145 million mobile phone subscribers, an increase of nearly 59 million in just six years. The adoption of new technologies has led to positive social changes, faster communication and an increased desire for democracy. The government’s “Digital Bangladesh” program has extended internet access and government services to the far reaches of the country."

Bangladesh has its share of economic and political challenges, of course.

There's the challenge of ongoing job creation. As the World Bank notes: "With around two
million young people entering the job market every year, Bangladesh must achieve export-led
growth by breaking into new markets with new products to create more and better employment
opportunities. This in turn requires enhancing private investment in capabilities and innovation
to put growth and employment generation on a healthy and sustainable path."

There is the challenge dealing with  Rohingya refugees flooding over the border from Myanmar. As the IMF notes: "Despite the high influx of refugees starting in August 2017, the Bangladeshi government continues to keep its borders open and provide assistance to incoming refugees in coordination with humanitarian agencies. The government has so far managed the additional spending with support from the international community. However, given the uncertainties surrounding the repatriation process, the crisis impact on host communities and the rest of the country could intensify. In the near-term, refugee camps face significant risks from floods and landslides during the monsoons, highlighting the urgent need to upgrade infrastructure."

The financial sector has its weak spots.  Both the World Bank and the IMF point out that tax collections are extremely low. As the IMF writes: "Tax reforms are urgently needed to increase the very low tax revenues. With tax revenues below 10.0 percent of GDP, there is a pressing need to boost collection. This will create room for increased public investment and improved social safety nets, without undermining fiscal sustainability."

There is a national election scheduled for December 2018. The opposition doesn't trust the incumbent government to hold a fair election, and the previous election in 2014 was marred by boycotts and violence. The incumbent government doesn't trust the opposition to contest an election in an open and nonviolent manner. Extreme terror is always a threat, as well.

Every country and every economy has its troubles. But I think back to when I first paid some attention to the Banglashi economy in the late 1970s, in the aftermath of the terrible famine there in 1974-75. The current problems of Bangladesh are a lot nicer ones to have.

Along with moving up from low-income to lower-middle-income status in the World Bank rankings, the United Nations Committee for Development Policy announced in March that Bangladesh had met the requirements to be reclassified from a "Least Developing Country" to a "Developing Country," although it needs to maintain its status on various measures until 2024 before the change officially happens.
Posted by Timothy Taylor at 10:36 AM