Snapshots of the Salubrious US Labor Market

The US unemployment rate has been less than 4% for the last couple of months, which might seem sufficient reason for breaking out the champagne. But the sense of celebration has been generally restrained.

Some of the reasons for hesitancy are probably just politics. My strong suspicion is that if a Democrat was sitting in the White House, a lot of Democrats would find reason to think that a 3.8% unemployment rate was excellent news. And while President Trump is happy to claim credit for a 3.8% unemployment rate, he is not willing to draw the inference that the need for a trade war to "save US jobs" is apparently pretty low just now. But beyond politics, my sense is that a lot of people don't realize that a number of the concerns over the labor market that were relevant a few years have since mostly gone away.

For a vivid example of the strength of the US labor market, consider this figure from the Job Openings and Labor Turnover Survey of the Bureau of Labor Statistics. It shows the ratio of unemployed persons per job opening. Back at the worst of the Great Recession, there were more than six unemployed people for every job opening. In the most recent data, there are actually more job openings than unemployed people. 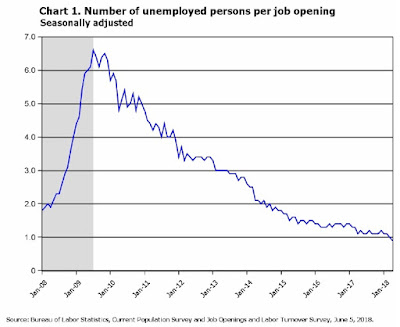 Or consider the concern that although unemployment has dropped, a substantial portion of the decline is due to adults who have become discourage, left the workforce and are no longer looking for jobs, or who have taken part-time jobs but would prefer full-time. Here's a figure from the Bureau of Labor Statistics showing several different measures of unemployment. The red line at the bottom is the standard unemployment rate. The light green line just above it adds the "discouraged" workers who would like a job. and looked for a job in the previous year, but have stopped looking because they don't think one is available. The teal line above that adds both discouraged and "marginally attached" workers, who looked for a job in the previous year and have stopped looking (even though they recognize that jobs are available). The top purple line includes the unemployed, discouraged, marginally attached, and those who are working part-time but would rather work full-time.

Overall, there are a lot of ways to look at unemployment, but whatever measure you choose, the measure is essentially back to what it was before the Great Recession. 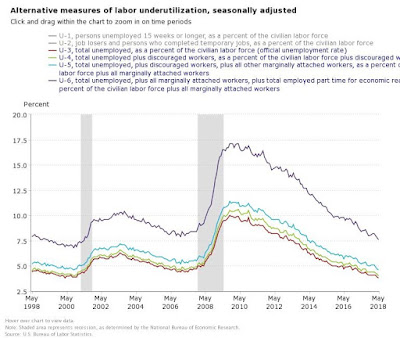 Or here's the employment rate for 25-54 year-olds, with separate lines for males (red line), females (green line), and total (blue line). The focus here is on "prime-age" workers, leaving out young adults who are attending college at increasing rates and near-retirees. There is a downward trend for men and an upward trend for women over the decades. But the current levels have rebounded back pretty much to where they were before the Great Recession. 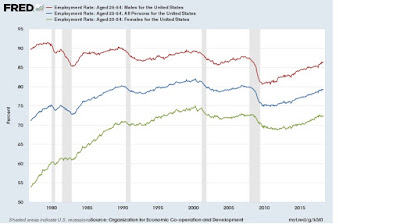 What about growth of wages and employee compensation? Here's a figure showing percentage growth in the last 12 months in the Employment Cost Index (blue line), which is commonly used because it covers all civilian workers and their benefits. The green line is a measure of the inflation rate faced by consumers called the Personal Consumption Expenditures Index, Less Food and Energy, which is the measure of inflation to which the the Federal Reserve pays attention.  Yes, growth in compensation is not as far above inflation as it was in the years before the Great Recession. But the gap does seem to be widening. 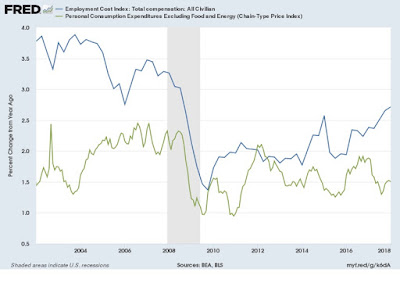 What about the concern that although overall unemployment rates are down, those who are unemployed are more likely to be long-term unemployed. This concern still has some bite, but less than a few years ago. This figure shows median (blue line) and average (red line) duration of unemployment. Median is the number where half are above and half are below. The average is higher than the median because those who are unemployed for a long time pull the average higher. The median duration of unemployment is back to what it was before the Great Recession, and comparable to what it was in the mid-1990s. 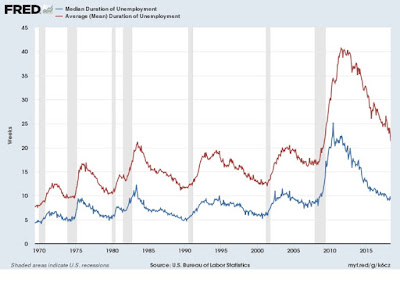 The share of unemployed who had had been out of a job for more than 27 weeks spiked much higher during the Great Recession than during previous recessions. But even that share has come down to levels that are at least comparable to the highs of the past, although not yet the lows. 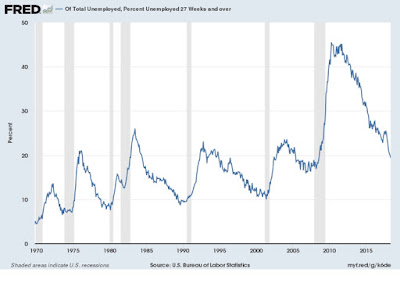 There is no heaven on Earth, and there is no ultimate perfection to be found in real-world labor markets. But the current US labor market situation is really quite good. After looking at the recent numbers, the New York Times ran a headline "We Ran Out of Words to Describe How Good the Jobs Numbers Are" (in a story by Neil Irwin, June 1, 2018). Among the descriptors suggested there are "splendid," "excellent," and "salubrious."
Posted by Timothy Taylor at 9:02 AM