Douglas Clement has an "Interview with Marianne Bertrand," subtitled "University of Chicago economist on the glass ceiling, implications of growing inequality and the trouble with boys" (The Region, Federal Reserve Bank of Minneapolis, online June 19, 2018).  Here are a few of the comments that especially stuck with me, but there's more at the interview.


"The idea of the paper was to focus on the particular gender identity norm, which is the idea that men should earn more than their wives. It’s an interesting one to focus on because it’s a norm that may only have become binding today. It may not have been that relevant in the past because women were much less likely to have the potential to out-earn their husbands, and now they do. So the idea of the paper was to investigate the empirical relevance of this norm among households as well as its implications. ...

"This was item number one in the paper. Let’s do something very simple: Look at the distribution of relative income of wife and husband within couples. If this norm is important, we should see, quote-unquote, “too few” couples where the wife earns more than her husband. And this is exactly what we found in administrative data; that’s the picture that we’re looking at right there. 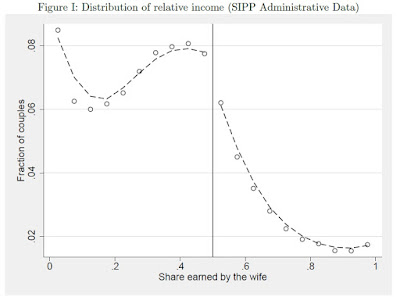 "And then, in a sense, starting from this picture, we tried to figure out where this could be coming from. One possibility is that those “missing” couples where the wife earns more than her husband may never get formed, meaning that it’s something about the marriage market. ... Another reason why this picture may exist is that those, quote-unquote, “missing” couples were less stable. So they existed, but they were more likely to break down. And we also found evidence of that in the data. Looking at couples where the wives earn more than the husbands, we found signs of more marital instability, more marital unhappiness and some signs that these couples were more likely to end up in divorce."

Thoughts about Divergence in Types of Consumption and in Political Views

"So, this is kind of an interesting point. How much can we say about how the lives of the rich and the poor changed? Let’s try to put together all of the data sets that we can think of over the longest time period that we can and say something about what it’s like to be rich, which we define as the top quartile of the income distribution, versus poor, which we define as the bottom quartile. What was it like several decades ago? What is it like today? ...

"I like to use the example you mentioned, social mobility. Suppose we work at the same company. You are my boss. I’m your employee. You’re from the top of the income distribution, and I’m from the bottom. My ability to move up in the company might be a function of how much you connect with me, and connecting with one another might be a function of the quality of the conversation that we can have around the water cooler. Did we do the same thing over the weekend? Do we watch the same shows? Do we have the same hobbies and eat the same food?

"So we tried to assemble all the data sets we could; for example, time-use data, which go back to the 1960s. Another data set that a lot of social scientists use is the General Social Survey, which tells us something about views and opinions—views on abortion, gays, racial issues, government spending and the like. ... [W]e had access to a marketing data set, which is truly remarkable. In that data set, we can see media consumption—what TV shows people watch, what movies they watch, what magazines they read. The data set also shows thousands of products that people may or may not buy, and thousands of brands that people may or may not buy or own.

"Then we built a metric of cultural distance between groups by income. There are many ways you could measure distance. We use a machine-learning algorithm and aggregate a number of methods that allow us to find the best model to predict someone’s income based on the brands or products they report consuming or the attitudes the person has. ...

"[N]ow we’ve done this exercise, as I said, for race, gender and urbanicity. When we first got these results on income, people said, especially in the context of the recent election, “Well, income is not the important one; it’s urban/rural. That’s the important divide in America.” We’ve also done it based on political attitudes, and the main result, which I just gave you for income—there’s no big trend—essentially applies to, at a first-level of approximation, everything that we have looked at.

"The one really large exception quantitatively is our ability to predict whether someone is liberal or conservative/Democrat or Republican based on their social attitudes. That has been increasing over time. So liberals and conservatives haven’t been diverging over time on TV consumption, brands or goods, but on social views they have been diverging a lot over time.

"The results were surprising to us. We went into this with in the back of our mind the discussion that’s happening right now [that Americans are increasingly divided along economic and other lines], and we really thought that we were going to see signs of that in the data.

"How do I rationalize the results? It’s not clear, but here’s one thought when it comes to products and brands. I think today we think you can easily see who is rich or poor because rich people own an iPhone and poor people don’t; but, then, 25 years ago, it was whether you owned a DVD player that separated rich and poor. There are waves of technological changes—the rich, the more educated are always going to be the early adopters of those—but there are constant waves of technological change."

The Gender Gap in Cognitive Skills is Bigger in Broken Families

"[T]he gender gap in noncognitive skills is particularly large in broken families. And that term can mean many different things. It’s low income, it’s absent fathers, it’s less education, it’s fewer parental inputs. ... If you have boys doing more poorly in broken families, that means that a lot of these boys become less marriageable. That means more single moms and more broken families in the future and hence, again, more boys growing up in conditions where they may not get the kind of parenting that could address whatever deficiencies they have in noncognitive skills. ... One argument we make in the paper is that boys may be born at greater risk of having noncognitive problems than girls. ... And if that’s true, then it’s particularly important to have stronger parenting for boys than girls in order to correct this deficit. But, again, that’s highly speculative."