US Intergenerational Mobility: An International Perspective

Intergenerational economic mobility has two aspects. "Absolute" mobility refers to the difference between one generation and the next. In an economy that grows substantially over time, absolute intergenerational mobility can be widespread--that is, most adults currently in the workforce would have higher income than did their parents at the same age. In contrast, "relative" mobility refers to whether the ranking of current adults--say, whether they are in the top 10% or the bottom 10%--is correlated with the ranking of their parents.

It's possible for there to be upward absolute intergenerational mobility for most people (if the economy is growing), but also to have not much relative intergenerational mobility (if adults tend to have the same ranking in the economy that their parents did). It's also possible not to have much absolute or relative intergenerational mobility: this would be a static economy in which people have similar income to their parents and also a similar ranking.
The World Bank summarizes much of the evidence on this question in Fair Progress? Economic Mobility across Generations around the World, by Ambar Narayan, Roy Van der Weide, Alexandru Cojocaru, Christoph Lakner, Silvia Redaelli, Daniel Gerszon Mahler, Rakesh Gupta N. Ramasubbaiah, and Stefan Thewissen (May 2018). Although the report looks at evidence from all around the world, I'll focus here on comments about the US economy.

The US has had relatively slow productivity growth for most of the period since the 1970s (although with a nice little spurt of growth in the dot-com years of the late 1990s and early 2000s). In addition, income inequality within any given year has been rising over that time period, too. The combination of slower growth and greater inequality means that absolute intergenerational mobility for the typical adult in the US hasn't been very good in recent decades. Moreover, studies that separate out out whether absolute intergenerational mobility in the US has bee more affected by slower growth or by rising inequality tend to point to rising inequality as the main culprit. The report notes:


"Absolute upward IGM [intergenerational mobility] is likely to be high in a society in which rising prosperity is broadly shared and sustained. Growth in average incomes, which increases the size of the economic pie, is necessary but not sufficient for a high rate of absolute mobility, which also requires a more equitable distribution of the benefits of growth. For example, the sharp decline in absolute mobility in the United States between individuals born in the 1940s and those born in the 1980s was driven more by the unequal distribution of economic growth than the slowdown in aggregate growth since the 1940s. ...

"Research conducted recently in the United States starkly illustrates the importance of not just growth, but also the distribution of growth for  absolute IGM. The share of individuals earning more than their parents in the United States, a reasonable measure of absolute IGM, fell from 90 percent among individuals born in the 1940s to 50 percent among people  born in the 1980s, who are the latest generation of adults of earning age. The decline was driven more by the unequal distribution of economic growth than the slowdown in aggregate growth since the 1940s.

"In a simulated U.S. economy in which GDP is maintained at the current level, but distributed across income groups as it was distributed among individuals born in the 1940s, absolute mobility among people born in the 1980s would have been 80 percent, which is 60 percent higher than what is observed. In contrast, if GDP growth since the 1980s were restored to the level of GDP in the 1940s and 1950s, but distributed across income groups as GDP is distributed today, 62 percent of the 1980s generation would have been earning more than their parents (Chetty et al. 2017)."

When it comes to relative intergenerational mobility, the US econonomy  has long had a reputation for being quite high, but the facts show that a number of other countries have similar levels. Part of the issue here is that the US distribution of income is more spread out that that of many other countries, and as a result, going from (say) the bottom third of the US income distribution to the top third requires a bigger jump than would be involved in a country with a more equal distribution of income, where the bottom third and top third are closer together.  Here's the report:


"Low relative mobility also implies that privilege and poverty alike are highly persistent across generations in many societies. For example, in the United States, a quarter of the sons born to fathers in the top 10 percent of earnings are also among the top 10 percenters as adults, and most sons born to top 10 percent fathers are at least in the top 30 percent. By contrast, 22 percent of sons born to fathers in the bottom 10 percent remain in the bottom decile as adults, and half remain in the bottom 30 percent. ... [P]erceptions of mobility can also diverge from actual mobility, particularly if comparisons are made across countries. For example, perceived mobility is higher among Americans compared with Europeans, despite mounting empirical evidence that relative IGM is lower in the United States than in several European countries." 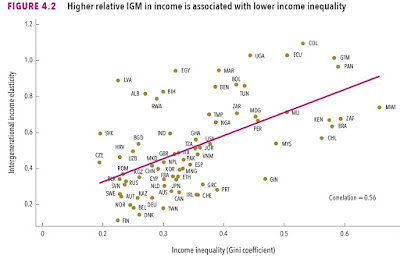 
"In a large majority of economies across the world, one’s chances of reaching the top quarter of the ladder of educational attainment depend largely on where one’s parents stood on that ladder (figure 3.6). This share would be 0.25 if one’s ability to obtain an education did not depend on how well-educated one’s parents are. However, there are few economies in which the share exceeds 0.20. The developing world dominates on the list of economies with the lowest share among the 1980s generation. Among the bottom 50 economies, 46 are developing, whereas only 4 are high income, including the United States." 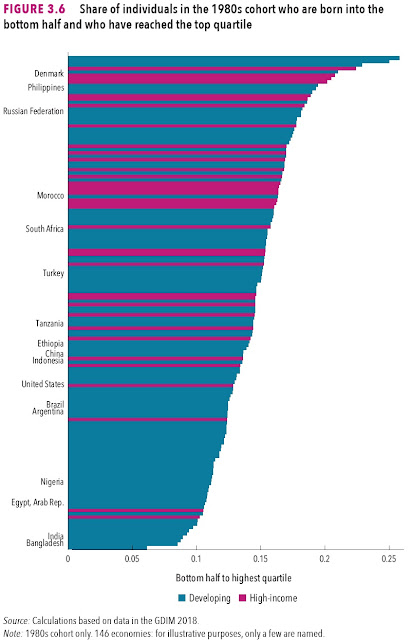 Thus, it seems plausible that in the US, higher education is acting in part as a way of passing economic success between generations. As a result, the US is not making full use of the talents of many of its citizens. As the report notes:

"Bell et al. (2017) provide a telling example from the United States on the effect of lost human potential due to low social mobility. They find that the probability a child will become an inventor is many times greater among children in rich families than among children in lower-income families and that a large share of this innovation gap can be attributed to differences in childhood environment. Thus, improving opportunities for social mobility could benefit not only the disadvantaged children, but also the overall society by increasing the rate of innovation and economic growth. More generally, realizing the wasted human potential would generate a rise in the overall stock of human capital in an economy, which could have a strong impact on long-term growth."

It's easy to say that everyone is in favor of a high degree of intergenerational economic mobility, but I don't think that's quite true. Sure, most people favor absolute economic mobility across generations--people having more income than their parents did at the same age. But when it comes to relative economic mobility, we tend to favor it only for those outside our own families. As I wrote a few years ago in an earlier post:

"It's easy to say that "we're all in favor" of mobility between generations, but of course, in practice, many of us aren't. After all, the highest level of intergenerational mobility would mean zero correlation between incomes of parents and children. I earn an above-average income, and I invest time and energy and money make location choices so that my children will greater human capital and earn above-average incomes, too. Thus, I must admit that I do not favor completely free mobility of incomes. I'm sure I'm not alone. Divide the income distribution into fifths, and think about parents in the top fifth. How many of them would like to live in an economy where their children have an equal chance of ending up in any of the other fifths of the income distribution?"

For some earlier posts on intergenerational economic mobility, see:
Posted by Timothy Taylor at 10:34 AM