The current chairman of the Council of Economic Advisers, Alan Krueger, has called it the Great Gatsby curve. (Full disclosure: Alan was editor of my own Journal of Economic Perspectives, and thus my direct boss, from 1996-2002.) Here is the curve, from the 2012 Economic Report of the President: 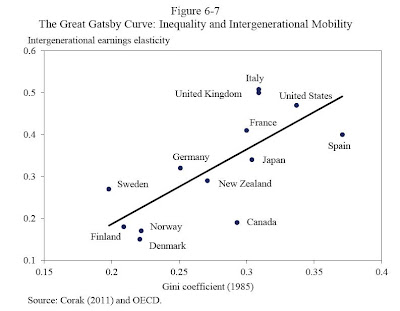 The horizontal axis of the diagram is a measure of economic inequality called the Gini coefficient. For a detailed explanation of how it is calculated, see my earlier here. For present purposes, suffice it to say that this scale runs on a scale where 0 is perfect equality, where all people have the same income, and 1 is perfect inequality, where one person has all the income. Using data for 1985, countries like the United States and Spain have high levels of income inequality, while Nordic countries like Sweden, Finland, Norway, and Denmark have relatively low levels.

The vertical axis of the diagram is labelled the "intergenerational earnings elasticity." This is a way of saying how how much the incomes of individuals are correlated with those of their parents. Here's the explanation from the Economic Report of the President:

"Family (or individual) incomes in one generation are also highly correlated with family (or individual) incomes in the next generation. In other words, the children of parents who are poor are more likely than
the children of well-off parents to be poor when they grow up. A common measure of mobility across generations is the intergenerational elasticity (IGE) of earnings or income, which is defined as the percentage difference in a child’s income associated with a 1 percent difference in the parent’s
income. ... Studies based on U.S. data ... suggest that plausible estimates of the average IGE between fathers and sons are between 0.4 and 0.6. An IGE of 0.4 means that if one father earned 20 percent more
than another over their lifetime, the first father’s son on average would earn 8 percent more than the second father’s son; an IGE of 0.6 means that the first father’s son would earn 12 percent more on average than the second father’s son. That is, the higher the IGE is, the lower economic mobility is between the generations."

Thus, the basic message of the Great Gatsby curve is that when a country has a higher level of income inequality at a point in time (the Gini coefficient on the horizontal axis), that country will also tend to experience less intergenerational mobility (that is, the correlation of income between one generation and the next will tend to be higher, on the vertical axis).

A first obvious question about this relationship is whether it is determined by some quirk in measurement: for example, would using different countries, or a different year, or different measures of inequality alter the relationship greatly? The Economic Report answers that question: "As other research has shown, the finding of a positive relationship between IGE and inequality ... is robust to alternative choices of countries, intergenerational mobility measures, and year in which income inequality is
measured ..."

Bhashkar Mazumder of the Chicago Fed offers an overview of the path of intergenerational mobility over time in the United States. He writes: "After staying relatively stable for several decades, intergenerational
mobility appears to have declined sharply at some point between 1980 and 1990, a period in which both income inequality and the economic returns to education rose sharply. ... There is fairly consistent evidence that intergenerational mobility has stayed roughly constant since 1990 but remains below the rates of mobility experienced from 1950 to 1980."

Of course, income inequality has been high and growing in the United States since the 1985 data shown on the graph above. The clear implication is that the intergenerational earnings elasticity will continue to grow as well. In a January 2012 speech on these issues, Alan Krueger ventured a projection:
"While we will not know for sure whether, and how much, income mobility across generations has been
exacerbated by the rise in inequality in the U.S. until today’s children have grown up and completed their careers, we can use the Great Gatsby Curve to make a rough forecast. ... The IGE for the U.S. is predicted to rise from .47 to .56. In other words, the persistence in the advantages and disadvantages of income passed from parents to the children is predicted to rise by about a quarter for the next generation as a result of the rise in inequality that the U.S. has seen in the last 25 years."

The most common theoretical mechanism hypothesized for this connection between current inequality and less intergenerational mobility is the education system. Gary Solon did much of the early modelling on this issue: here's a description of that work from Mazumder:

"Economic models have emphasized the importance of parental investment in children’s human capital as one of the key mechanisms behind the intergenerational transmission of labor market earnings. One such model developed by Solon points to at least two important factors that could cause intergenerational
mobility to change over time: changes in the labor market returns to education and changes in the public provision of human capital. In periods where the returns to schooling are rising, the payoff to a given level of parental investment in children’s human capital will be larger, causing differences between families to persist longer and leading to a decline in intergenerational mobility. In contrast, during periods where public access to schooling becomes more widely available, then one might expect the intergenerational association to decline and mobility to rise."

In short, when the returns to human capital are especially high, inequality will be higher. In this situation, those with income will invest more in the education of their children, using education as a way to pass on their own economic position. Indeed, Mazumder also points to some evidence that "the difference
in test scores by family income has grown by 30% to 40% for children born in 2001 relative to those born in 1976."

As a solution, it's easy to say that we're all in favor of expanding education for those at the bottom of the income scale, but if that is indeed true, it's fair to say that we as a society have been doing a lousy job of accomplishing that goal over the last few decades. Indeed, we've been doing a lousy enough job as to make one wonder if a general broad rise in overall education levels--as opposed to better schools for their child or their town--really is a shared goal for many Americans. Work by Nobel laureate James Heckman and various co-authors has argued that the U.S. high school graduation rate, when consistently measured over time, peaked in the 1960s and has declined since then.

It's easy to say that "we're all in favor" of mobility between generations, but of course, in practice, many of us aren't. After all, the highest level of intergenerational mobility would mean zero correlation between incomes of parents and children. I earn an above-average income, and I invest time and energy and money make location choices so that my children will greater human capital and earn above-average incomes, too. Thus, I must admit that I do not favor completely free mobility of incomes. I'm sure I'm not alone. Divide the income distribution into fifths, and think about parents in the top fifth. How many of them would like to live in an economy where their children have an equal chance of ending up in any of the other fifths of the income distribution? (Megan McArdle makes this point with nice force in a blog post here.)


Those who would like an overview of some of the recent more technical debates over the Great Gatsby curve might usefully begin with this post by Miles Corak, an economist at the University of Ottawa who was one of the first to draw the curve.
Posted by Timothy Taylor at 6:00 AM