Are the New Auto Fuel Economy Standards For Real?

Politicians are predisposed to like a technology standard, like the Corporate Average Fuel Economy (CAFE) standards for automobile miles-per-gallon, as a way of holding down petroleum use. After all, it sounds a lot better to voters than enacting a gasoline tax or a carbon tax! Pass a law that better-mileage cars will be phased in over the next decade or two, and politicians can boast of their great achievement --sidestepping the fact that promised aren't achievements and rules are made to be changed.

Thus, when I heard about the plans for a dramatic increase in CAFE standards, I was skeptical. In the most recent issue of my own Journal of Economic Perspectives, Christopher R. Knittel discusses various aspects of  "Reducing Petroleum Consumption from Transportation." As Knittel writes: "A new CAFE standard in place for 2011 seeks to increase average fuel economy to roughly 34.1 miles per gallon by 2016. The Environmental Protection Agency and Department of Transportation are currently in the rule-making process for model years 2017 and beyond, with President Obama and 13 automakers agreeing to a standard of 54.5 MPG by 2025." Knittel provides evidence to back up my skepticism about the past use of CAFE standards, but he also argues that those future standards--unbelieveable as they may at first appear--are technologically achievable.


Back in 1975, against a backdrop of a dramatic rise in oil prices and concern over dependence on imported oil, the U.S. enacted the Corporate Average Fuel Economy (CAFE) law, requiring that over the average of their cars sold by each company, the average had to start at 18 miles-per-gallon, and then rise to 27 mpg by 1985. Higher gasoline prices provided a strong inducement for people to buy these more fuel-efficient cars, but when gasoline prices dropped in the mid-1980s, the CAFE standards stagnated. Here's a figure from Knittel showing how CAFE standards flattened out after 1985--and also showing the planned increase to take place. 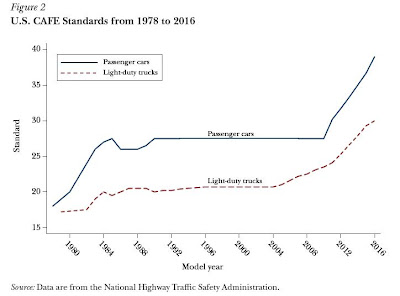 The lack of any increase in the CAFE standards was only part of the story. Knittel explains: "[T]wo features of the original CAFE standards reduced their effect. First, sport-utility vehicles were treated as light trucks, and thus could meet a lower miles-per-gallon standard than cars. Perhaps not coincidentally, in 1979 light trucks comprised less than 10 percent of the new vehicle fleet, but this share rose steadily
and peaked in 2004 at 60 percent. Second, vehicles with a gross vehicle weight of over 8,500 pounds, which includes many large pickup trucks and sports-utility vehicles, were exempt from CAFE standards."

Taking these factors together, actual fuel economy for the U.S. fleet of cars hasn't been rising much, although it has edged up in the last few years with higher gasoline prices. My own interpretation is that the CAFE standards effectively became nonbinding--that is, they weren't pushing anyone to buy a different car than they otherwise would have purchased, and they weren't adding to fuel economy. Here's the data: 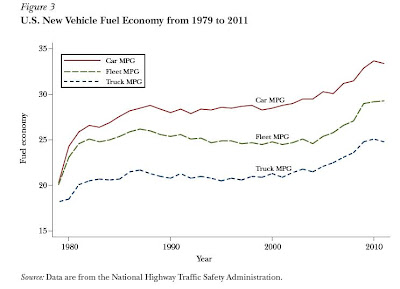 Moreover, Knittel has carried out a series of studies looking at technological progress in cars, and the tradeoffs between weight, engine power, and fuel efficiency. He finds: "On average, a vehicle with a given weight and engine power level has a fuel economy that is 1.75 percent higher than a vehicle with the same weight and horsepower level from the previous year. ...In the medium run, automakers can adjust vehicle attributes by trading off weight and horsepower for increased fuel economy. In Knittel (2011), I find that reducing weight by 1 percent increases fuel economy by roughly 0.4 percent, while reducing horsepower and torque by 1 percent increases fuel economy by roughly 0.3 percent."

By Knittel's calculation, getting from the new-car average fuel economy standard of 29 mpg in 2010 to 34.1 mpg in 2016 is do-able. If technological progress continues to improve mileage by 1.75% per year, and ways are found to reduce weight and engine power by about 6%, the standard for 2016 is achieveable.

But what about that planned standard of 54.5 mpg by 2025? Knittel explains that the number is somewhat inflated: "Taken literally, it would require fundamental changes to rates of technological progress and/or the size and power of vehicles. The 2025 number is a bit misleading. In the law, the 54.5 miles-per-gallon standard is based on a calculation from the Environmental Protection Agency based on carbon dioxide tailpipe emissions. It also includes credits for many technologies including plug-in hybrids, electric and hydrogen vehicles, improved air conditioning effifi ciency, and others. On an apples-to-apples basis, Roland (2011) cites some industry followers that claim that the actual new fleet fuel economy standard in 2025 is more like 40 miles per gallon. Achieving 40 miles per gallon by 2025 is certainly possible. At a rate of technological progress of 1.75 percent per year, 40 miles per gallon requires additional reductions in weight and engine power of less than 7 percent."

But at a deeper level, it's not even clear that fuel economy standards are a good policy idea. Knittel explains: "At a basic level, it focuses on the wrong thing—fuel economy instead of total fuel consumption. CAFE only targets new vehicles and leads to subsidies for some vehicles. Finally, CAFE pushes consumers into more-fuel-efficient vehicles without changing the price of fuel, leading to more miles traveled. The empirical size of this last effect, known as “rebound,” is a matter of ongoing research,
but to the extent that rebound occurs, it necessarily leads to greater congestion, accidents, and criteria pollutant emissions relative to the status quo." A considerable body of economic research suggests that if your policy goal is to reduce petroleum consumption, a gasoline tax or a carbon tax accomplishes the goal at a far lower social cost than fuel economy standards--although for politicians the explicitness of that cost seems to make it a nonstarter.

For more discussion of this topic, I recommend "Automobile Fuel Economy Standards: Impacts, Efficiency, and Alternatives," by Soren T. Anderson, Ian W. H. Parry, James M. Sallee, and Carolyn Fischer, in the Winter 2011 issue of the Review of Environmental Economics and Policy.  The publisher has made article freely available here.