This is the fourth of four posts based on figures from the 2012 Economic Report of the President. For the first post and an overview, start here.

Amid the complexity and confusion of the U.S. income tax code, it's quite possible for people with similar levels of income to pay widely varying level of tax. For illustration, consider the table. The rows of the table divide up the U.S. income distribution into fifths, or quintiles. The last row shows results for the top 1% of the income distribution.  For each quintile--and for the top 1%--the columns of the table then tell about the distribution of taxes for that group. 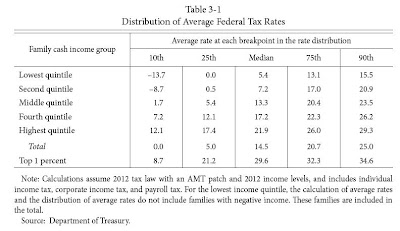 At least for me, there is something of a tendency when looking at tables like this one to feel as if some of those with high income are paying too little, and some of those with low incomes are paying too much. And maybe that quick reaction is correct. But the tax code has so many rules and provisions and exceptions and situations, that it's s also possible that if I knew the actual details of some of these taxpayers, the outcome would seem fairly reasonable to me.

The broader point here is that when a tax code becomes enormously complex and lengthy, it is also going to allow the possibility of considerable variation in taxes paid even for those with similar incomes. Even if all the individual provisions of such a tax code are defensible (an enormous "if"!), the tax code as a whole is likely to end up appearing arbitrary and unfair.
Posted by Timothy Taylor at 1:00 PM