Europe's Growing Imbalances Before Its Debt and Financial Crisis.

Nils Holinski, Clemens Kool, and Joan Muysken  offer many key ingredients of the story in "Persistent Macroeconomic Imbalances in the Euro Area: Causes and Consequences." It appears in the January/February 2012 issue of the Federal Reserve Bank of St. Louis Review. As a useful expository tool, they discuss "North" and "South" Europe, where North includes Austria, Germany, Finland, and Netherlands, while South includes Greece, Ireland, Portugal and Spain. In the figures that follow, North and South refer to the averages of these groups not weighted by economy or population--because if they were weighted in that way, "North" would basically be Germany and "South" would basically be Spain. They focus only on the period of time from 1992-2007--that is, the financial crisis has not yet erupted. But their analysis strongly suggests that an eruption of some sort was coming. 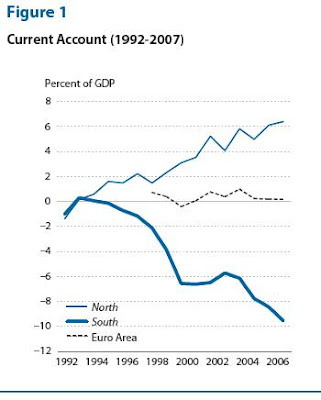 When it comes to net public savings, both North and South countries were reducing their borrowing in the lead-up to the euro and in the early 2000s. In other words, the large trade deficits in the South weren't caused by higher government borrowing. 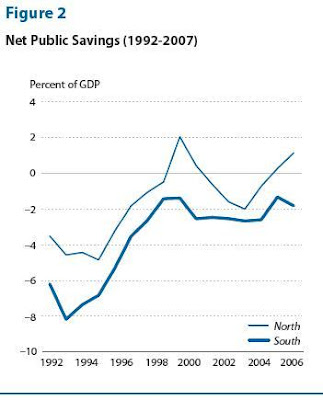 However, private saving did make a major contribution to the trade deficits in the South. Back in the mid-1990s, gross private saving was about the same in the North and South, at about 22-24% of GDP. It remained at about that level in the North, although there is an increase in the yeas from the arrival of the euro in 1999 up to 2007. But in the South, saving fell by more than one-third to about 14% of GDP by 2007. This drop in saving reflects higher consumption of imports, and thus is linked to the larger trade deficits of the South. 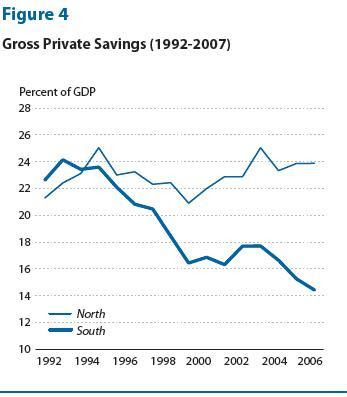 When it comes to private investment, the South has done shown a modest rise and the North a modest decline. When an economy runs trade surpluses, it accumulates financial capital to purchase foreign assets; for example, this is why the Chinese have come to own so much in U.S. Treasury bonds. When a country runs trade deficits, on the other side, it experiences an inflow of financial capital from other countries. At least in theory, such inflows and outflows of financial capital can in some cases be a healthy form of economic adjustment. For example, one can imagine the possibility of German investment capital flowing into Spain, being invested prudently, and helping Spain's economy grow rapidly while providing a good rate of return to German investors. One can also come up with less-pleasant scenarios, in which German investment capital flows into Spain, is not invested prudently, and leads to a situation where German investors do not receive a good rate of return. As the authors put it:" In particular, in the presence of integrated real and financial markets, countries with a lower per capita income would be expected to attract domestic and foreign investment since higher productivity and economic growth rates promise above-average rates of return. The productivity of the invested capital ensures that the accumulated foreign debt can ultimately be repaid." 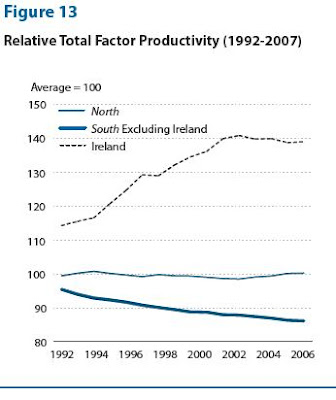 Long story short: The situation in the euro zone between North and South was already headed toward severe instability before the financial and debt crisis. Large and unsustainable imbalances of trade and capital flows were already happening within the euro area. This story is a re-telling of what I called in a November 18 post The "Chermany" Problem of Unsustainable Exchange Rates. When trading partners are locked together by fixed exchange rates that are generating large surpluses in one country and large deficits in the other--whether in the case of China and the U.S economy, or in the case of Germany and northern Europe as compared to much of southern Europe--substantial economic stresses can be created.

Holinski, Kool, and Muysken conclude this way: "In our view, in a common currency area—or an irrevocably fixed exchange rate system, for that matter—fiscal policy in the end will be forced to step in to address unsustainable current account imbalances. This is exactly what experience in the euro area over the past few years shows. To maintain and defend the euro area, northern euro area countries will need to bail out southern countries, willingly or not, and are doing so as witnessed by implicit and explicit guarantees and continuing emergency financial support. And they probably will need to keep doing so for a substantial period ahead."

This perspective emphasizes that Europe's debt and financial crisis isn't just another chapter of the U.S. financial crisis, but has distinctively European roots. It also emphasizes that Europe's imbalance aren't something that can be solved by cutting one mega-deal. Either the South needs to increase its saving so that its trade deficits diminish, or else raise productivity so that it can pay off the financial consequences of its trade deficits over time--or else the North will have to pay continued subsidies if it wishes to keep the fixed exchange rate of the euro area.
Posted by Timothy Taylor at 6:00 AM