Twice a year, the Congressional Budget office puts out "The Budget and Economic Outlook," which provides budget and economic forecasts. After the report last August, I called my blog post Unrequited Economic Optimism from the Congressional Budget Office, because it predicted that in 2012, the fall in housing prices would bottom out and the unemployment situation and growth would improve a bit, which would finally be followed by much better news in 2013 and thereafter. However, the just-released January 2012 report dials back the optimism. Here's CBO (footnotes omitted):

"CBO’s current economic forecast differs in some respects from its previous one, which was issued in August, as well as from the January Blue Chip consensus forecast (which is based on about 50 forecasts by private-sector economists) and the consensus of January forecasts by Federal Reserve Board members and Federal Reserve Bank presidents. 1 Compared with what it forecast in August, CBO is currently projecting weaker growth of real GDP in 2012 and 2013 but slightly stronger economic growth over the remainder of the decade ... The current forecast also includes a higher unemployment rate and lower interest rates through 2021. CBO’s current projections for the growth of real  GDP in 2012 and 2013 are also weaker than those by the Blue Chip consensus and the Federal Reserve— perhaps owing to different assumptions about federal
fiscal policy—and CBO’s projections for the unemployment rate are higher."

Growth
Overall, CBO writes: "A large portion of the economic and human costs of the recession and slow recovery remains ahead. In late 2011, according to CBO’s estimates, the economy was about halfway through the cumulative shortfall in output that will result from the recession and its aftermath." Here's a figure comparing the projected growth rate of the U.S. economy with a group of leading trade partners of the U.S., where their growth rates are weighted by their shares of U.S. exports. The countries are Australia, Brazil, Canada, China, the euro zone, Hong Kong, Japan, Korea, Mexico, Singapore, Switzerland, Taiwan, and the United Kingdom. A forecast like this one, which suggests the bad news slower growth than the comparison group now and for for several years, but faster growth later on, is inherently discomforting. 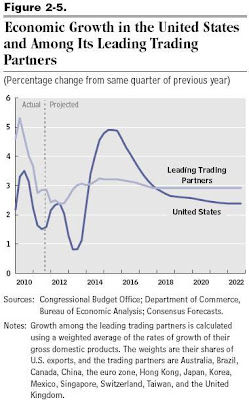 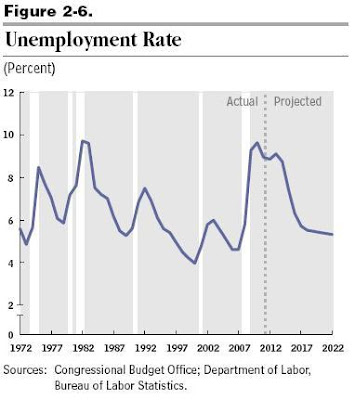 CBO continues to believe that housing prices will bottom out in the second half of 2012, which would help a lot of U.S. households feel more secure. However, a historically large share of U.S. housing stock is vacant, which means that the house construction industry won't rebound until a few years later. 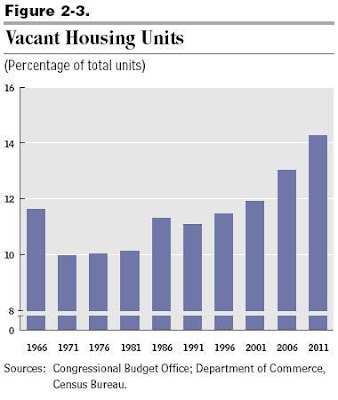 "Net" business investment is the amount of investment after depreciation has been subtracted out: that is, it is the amount added to the capital stock after replacing what has worn out. This is a modest bright spot for the U.S. economy, having already turned up, with CBO expecting that it will continue to rise back toward historical averages. 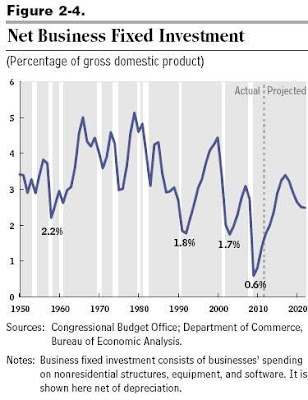 My standard line about the U.S. economy, as we all buckle our seat belts for the election next fall, is that whoever is elected president in November 2012 is like to be regarded as an economic saviour by the end of his first or second year of office. But a lot of the eventual turnaround won't have much to do with whatever policies are enacted between now and then; it will just be that the economy will have finally managed to work through most of the backlog of problems from the Great Recession.
Posted by Timothy Taylor at 6:00 AM