What Are the Top Five Global Risks for the Next Decade?

The World Economic Forum has published Global Risks 2012, the seventh edition of an ongoing report. The report is based on survey data, so what it really reveals is what those at high-levels are worrying about--and how those worries are evolving over time.

Here's a description of the overall project from the report: "Data and analysis are based on a newly designed survey covering a meaningfully expanded set of 50 global risks across five categories. The assessments of these risks more than doubled as a result of this year’s survey, with 469 experts and industry leaders responding worldwide. The survey captures the perceived impact and likelihood for each risk over a 10-year
time horizon using a clear and simple five-point scale ..."


As a starting point, consider the top five risks as rated by impact, and the top five risks as weighted by likelihood, and how they have changed during the last few years. The figures are below. The report sums up the change this way: "The risk landscape in this 2012 report is based on a refined and expanded set of 50 risks, compared to 37 in previous years. This means that comparisons to the 2011 report are not like-to-like. However, it is clear that respondents’ concern has shifted from environmental risks in 2011 to socioeconomic risks in 2012, as shown in Box 1. Economic risks have displaced environmental risks as those considered most likely. In 2011, the risks perceived as having the highest potential impact were economic and environmental; in 2012, they are economic and societal." 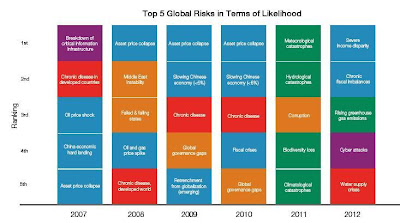 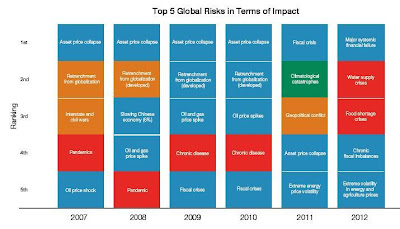 The colors on these figures represent the category of risk: blue is economic, green is environmental, orange is geopolitical, red is societal, and purple is technological. The report itself offers a lot of interesting analysis of how these risks and others are interrelated, and how the risks may cluster into groups or scenarios.

My own main reaction is that when you are asked each year about risks over the next decade, your answers shouldn't change too dramatically. After all, if your answers change a lot in one year, it implies that you are reacting too much to current events, rather than trying to look ahead over the ten-year horizon. Of course, answers will evolve over time as new information arrives. Still, it's intriguing to me to look at the concerns that seem to fallen from the top of the lists, and wonder whether they are being underemphasized in the press of current events.

For example, when looking at the table showing "Global Risks in Terms of Impact," there is a lot of consistency in the answers. There's also a lot of blue in the figure, showing that economic concerns appear to loom largest: asset price collapse, fiscal crisis, financial crisis, energy price volatility, a slowdown in China's economy. Even some of the geopolitical concerns, like backing away from globalization, are important largely for their economic consequences. In the early years, pandemic and chronic disease hit the top five, but by 2012 food and water supply crises--again often economic in essense--in the top five. Environmental issues are not seen as ranking in the top group, the only green in the figure is "Climatological concerns" in 2011, in the aftermath of Japan's devastating earthquake, but it then drops off in 2012. There is no purple in the figure: that is, technological concerns are not thought to be in the top five in terms of impact.

Remember, the questions in the surveys are about the size of risks over the next 10 years. But in assessing what risks have the largest size, it feels to me as if the lists are being driven pretty heavily by the Great Recession and its aftermath, as well as a few other current economic concerns.

To me, these sorts of fluctuations are mildly disturbing. They suggest that the high-powered folks answering these kinds of surveys are often reacting to current headlines, and haven't actually given a lot of serious thought to what risks are most likely to arise in the next 10 years nor to how bad those risks might be. Of course, that's also why reports like this one are useful and potentially important. Taking actions to reduce future risks now can often be much cheaper than cleaning up after they occur. But that requires forcibly lifting our eyes up from the headlines of today and trying to develop a clear-minded vision of future risks over the middle-term and the long-term.

For the record, here are the 50 risks listed in the survey, by category: