Six Adults and One Child: The Coming Baby Bust

Wendell Cox and Emma Chen tell the story of "Six Adults and One Child" in their chapter in
"The New World Order," edited and largely written by Joel Kotkin for the Legatum Institute. Much of the report is about thinking of the world as dominated by three spheres: the Indian sphere of influence,
the Sinosphere and the Anglosphere. But Cox and Chen are focused on the demographics of the coming baby bust. Here's their story from China (footnotes omitted):

"On a Saturday afternoon at The Bund, Xiao Ming (or “Little Ming”) clings tightly onto the hands of his paternal grandparents. His maternal grandparents walk slightly ahead, clearing a path for him in the midst of all the buzz and traffic. Retracing the imprints of their imaginary footsteps, Xiao Ming takes his first tentative steps as a three year old in town for the first time. Slightly behind him, the watchful eyes and
ready hands of his own parents spur him on.

Xiao Ming’s personal parade epitomises the popular quip in Shanghai and across China, that “it takes six adults to raise one child”. These six individuals form the unspoken support structure of China’s youth: While the OECD points out that 80% of students in Shanghai attend after-school tutoring, it fails to capture the “soft factors” behind Shanghai’s top rankings in the Program for International Student Assessment (PISA). Popular Chinese dramas such as 房奴 (House Slave) depict this in meticulous detail: Grandparents spend hours brewing “brain tonics” for their grandchildren, and parents pack austere work lunchboxes to save up for their child’s tuition fees. ...

Here’s the big issue down the historical road: Thirty years from now, how will Xiao Ming handle six elderly parents and grandparents, all by himself? Xiao Ming’s impending dilemma is not unique to China. Overall what author Phil Longman calls a “gray tsunami” will be sweeping the planet, with more than half of all of population growth coming from people over 60 while only six percent will be from people under 30. The battle of the future – including in the developing world – will be, in large part, how to maintain large enough workforces required for the economic growth needed to, among other things, take care of and feed the elderly. ...

Already the global fertility rate, including the developing countries, has dropped in half to an estimated 2.5 today. Close to half the world’s population lives, notes demographer Nicholas Eberstadt, in countries with below replacement rate birth-rates. The world, he suggests, is experiencing a “fertility implosion”."

Here's a figure to illustrate. The "dependency ratios" here refer to the number of either elder people over 65 or children age 14 and under compared to every 100 members of the working-age population between ages 15-64. Thus: 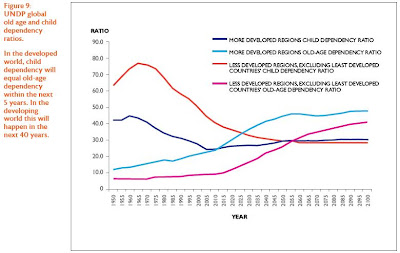 The question of how the workers of tomorrow will support the elderly of tomorrow is a global issue. Ultimately, the only answer I can see to the policy question is an expectation that most people will retire later than their current expectations.  But I also suspect that living in a society where the elderly outnumber the children will reshape all sorts of institutions of everyday life. Schools and playgrounds will become more scarce; libraries and senior centers will proliferate. Holidays like Halloween are already moving from being child-centered to being adult-centered.

Many people will find that they are part of a tall, slender family "tree." Instead of experiencing three generations of relatives--children, parents, grandparents--more and more people will be living in families where there are four or even five generations living at the same time. However, with smaller family sized these generations will not include large numbers of people. Thus, you can imagine a typical family "tree" of the future as consisting of two grandparents approaching age 60, who had one child, who in turn married and had one child, but who are also feeling responsible for two of their own parents who are about 80 years of age, and also also for one of their grandparents who has just turned 100. Families with fewer children will spend less of their adult lives in raising children. There will also be ever-greater numbers of adults who never become parents. For example, will we rely more on close family members, because each generational tie feels more precious? Or of necessity, will we all need to rely more on non-relatives? We do not have mental templates for how we organize or family ties and responsibilities in these tall slender family trees.
Posted by Timothy Taylor at 6:00 AM