I always enjoy looking through the annual Economic Report of the President, but I confess that I impose a couple of rules. I focus almost entirely on the figures and tables, and how they are discussed in the text. I ignore all economic projections for the future, and all comments about specific policies of the current administration. At least for me, this approach is useful in stripping away the politics, and focusing instead on some vivid facts and analysis. I'll offer four posts today using figures from the 2012 ERP:


The Great Recession has been brutally deep, and the aftereffects seem likely to persist for at least five years after it officially ended in June 2009 (by the dating of the National  Bureau of Economic Research). But in the context of financial recessions in other countries, the U.S. experience actually doesn't look so bad. Here's a table comparing the behavior of real GDP across 14 recessions associated with financial crises. The average peak-to-trough decline is a drop of 10.2%; in the U.S., the decline was 5.1%. The average length of these recessions was 6.6 quarters; in the U.S., peak-to-trough was 6 quarters. 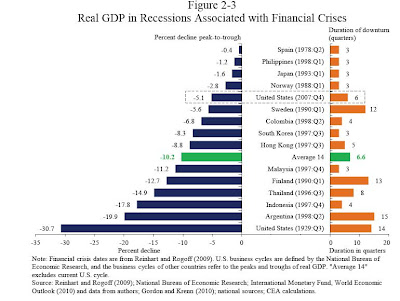 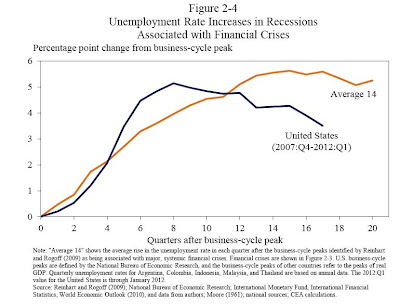 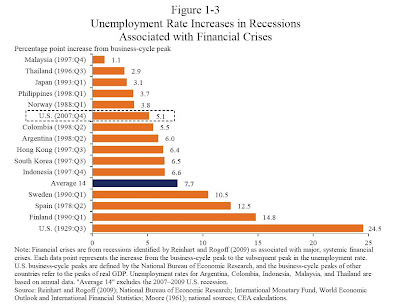 Even the pattern of the U.S. economic recovery, sluggish as it has been, has basically followed the time profile of the 14 comparison countries.

Sometimes people talk about the depth of the Great Recession as if it really couldn't have been any worse--as if the very depth of the recession and the sustained proves that macroeconomic policy to counter the recession was necessarily ineffective. The conclusion does not necessarily follow, of course. To me, these comparisons offer some (admittedly impressionistic) evidence that the monetary policy steps taken by the federal government--the huge budget deficits on the fiscal side, along with  the near-zero federal funds interest rates and quantitative easing on the monetary side--did have beneficial effects. The Great Recession and its aftermath have been gruesome, but without the aggressive fiscal and monetary policy response, it could have been even worse.
Posted by Timothy Taylor at 6:00 AM