Back in 1987, the very first issue of my own Journal of Economic Perspectives had a symposium on the just-passed Tax Reform Act of 1986, which famously (among economists, at least) reduced various exemptions, exclusions, deductions, and credits in the tax code, and then used the extra money to reduce marginal tax rates. In that issue, Nobel laureate James Buchanan offered a trenchant analysis of the political economy behind such legislation. He argued that politicians love to hand out tax breaks to specific groups, but as they do so, it becomes necessary to raise tax rate on remaining income that isn't getting a special break. Eventually, the tax rates get so high, and the tax breaks get so numerous, that Congress girds up its loins and passes a bill like the Tax Reform Act. However, Buchanan continued, it would be imprudent to view this bill as proof that Congress actually believe in a simpler tax code with lower rates. Instead, it is just politically necessary to pass such a bill from time to time, so that the political cycle of more tax breaks and higher rates can unwind again.(My journal is freely available on-line back to 1994, but the first issue is not yet freely available. However, it is available through JSTOR, and many academics will have access in that way.)

In our current impasse over crafting middle-run and long-run ways to reduce budget deficits, many conservatives would like to have a tax code with lower marginal tax rates and with fewer government efforts to micro-manage aspects of the economy, while many liberals would like to have a tax code that raises more revenue--in particular from those with high incomes. Reducing the reach of tax deductions, credits, exemptions, and exclusions--which collectively go under the name of "tax expenditures"--could offer a way to provide some satisfaction for all sides.

Daniel Baneman, Joseph Rosenberg, Eric Toder, Roberton Williams discuss "Curbing Tax Expenditures"  in a paper just published by the Tax Policy Center. They point out that a George W. Bush tax commission back in 2005 proposed limits on tax expenditures, as did more recently President Obama's President Obama’s National Commission on Fiscal Responsibility and Reform  and a commission from the Bipartisan Policy Center.

Tax expenditures comprise large sums. The authors of the TPC paper point out: "Despite significant variation over the years, tax expenditures impose substantial costs on the federal budget and will continue to do so. In 2011, they were projected to cut revenues and raise outlays by $1.1 trillion, more than we collected from individual income taxes and nearly half of total federal revenue collections for the year."

Of course, the problem with altering tax expenditures is that people are used to them, and don't want to see them disrupted. By far the biggest tax expenditure is the fact that employer-provided health insurance isn't taxed as income: if it was, the U.S. Treasury would collect about $174 billion per year more. The second-biggest tax break is the deductibility of mortgage interest, which costs the Treasury about $89 billion per year. Other big-ticket tax expenditures include deductibility of state and local taxes, deductibility of charitable contributions, lower tax rates for capital gains and dividend income, and others. You can make all the tough-minded policy arguments you want about how in a U.S. economy where rising health care costs are a major policy concern, maybe having a $174 billion tax break subsidizing health insurance isn't the best idea, or in a U.S. economy that has just seen the destructive power of a housing price bubble, maybe a tax break to make it easier to spend more on houses isn't a great idea. But it's tilting at windmills to attack these sorts of provisions one at a time.

Instead, the TPC authors point out:  "While an ideal tax reform process would comprehensively evaluate each tax expenditure on its merits, eliminating some and restructuring or retaining others, broad-based limitations on tax expenditures may be easier to enact and would still produce net benefits. This paper examines alternatives for implementing across-the-board limits applied to a selected group of the largest and most widely utilized tax preferences." Thus, they offer proposals like converting most tax expenditures into a single tax credit at a 15% rate, or putting a cap (as a share of income) on the total tax expenditures that could be claimed on any tax return, or even just reducing the cost of all tax expenditures across-the-board by a fixed percentage amount. In other words, don't tackle individual tax expenditures head-on, but instead try to rein back on many tax expenditures all at once. 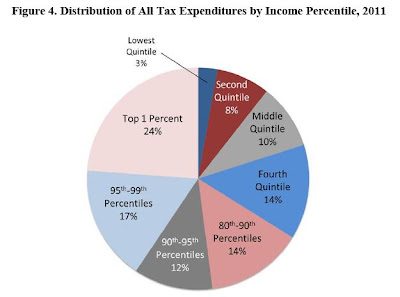 The next figure shows effective (that is, average) tax rates for different income levels, and then shows what the tax rates would be without tax expenditures. The federal income tax is progressive: on average those with higher incomes do pay a higher share of income in taxes than those with lower incomes. But at the upper income levels, the presence of tax expenditures reduced the extent of that progressivity. 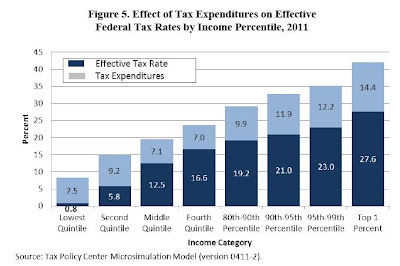 Reducing tax expenditures would arguably reduce certain ways in which the government is influencing economic outcomes. It would free up revenue both to pay for reducing marginal tax rates, and also to pay for some reduction of long-germ budget deficits. I believe there is a deal waiting to be cut, although I'm admittedly dubious as to whether the current crop of politicians can achieve it.

For a previous take on tax expenditures with some additional background and argument, see my post of last August 3, "Tax Expenditures: One Way Out of the Budget Morass?"
Posted by Timothy Taylor at 6:00 AM