It has been common for some years for politicians and educators to vow that America will greatly increase the proportion of students attending college. For example, in a speech to Congress on February 24, 2009, President Obama said: "I ask every American to commit to at least one year or more of higher education or career training.  This can be community college or a four-year school; vocational training or an apprenticeship.  But whatever the training may be, every American will need to get more than a high school diploma.  And dropping out of high school is no longer an option.  It’s not just quitting on yourself, it’s quitting on your country – and this country needs and values the talents of every American.  That is why we will provide the support necessary for you to complete college and meet a new goal:  by 2020, America will once again have the highest proportion of college graduates in the world."


But how will the United States structure and pay for this expanded college attendance? For example, one policy approach would be to plan for dramatic expansion of enrollment in existing state colleges and universities, but with very tight state budgets, this isn't happening to any great extent. Instead, the answer that seems to be evolving, without ever really being enunciated and debated, is that the federal government will finance a dramatic expansion of higher education through an expansion of student loans, and because of limits on the number of slots at existing public colleges and universities, many students will take those loans to the for-profit higher education sector. In the Winter 2012 issue of my own Journal of Economic Perspectives, freely available on-line courtesy of the American Economic Association, Deming, David J., Claudia Goldin, and Lawrence F. Katz discuss the tradeoffs of this choice in "The For-Profit Postsecondary School Sector: Nimble Critters or Agile Predators?"

As the authors point out, the time since 2000 is "a period when enrollment in the for-profit sector tripled while enrollment for the rest of higher education increased by just 22 percent. The solid dark line shows
that the fraction of fall enrollments accounted for by the for-profits increased from 4.3 percent in 2000 to 10.7 percent in 2009." They point out that "almost 90 percent of the increase in for-profit enrollments during the last decade occurred because of the expansion of for-profit chains," where a "chain" is defined as an institution that operates across states or has more than five branches within a state." 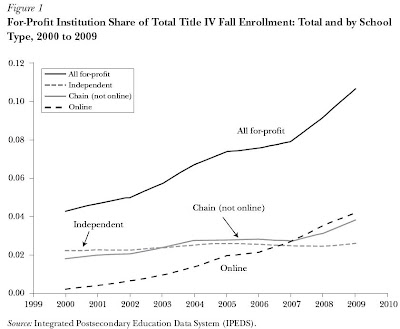 
For-profit institutions also have been quite flexible in providing the kinds of career-oriented classes that many students want: "For-profit programs typically are not meant to prepare students to continue to another form of higher education, as is the case with most community colleges. Rather, the for-profits almost always offer training for a vocation or trade.... Although 5 percent of all BAs are granted by for-profit institutions, 12 percent of all BAs in business, management, and marketing are. Other large for-profit  BA programs are in communications (52 percent of all BAs in communications are granted by for-profits), computer and information sciences (27 percent), and personal and culinary services (42 percent). ... Among AA degrees just two program groups—business, management, and marketing, and the health professions—account for 52 percent of all degrees. In the BA group, the business program produces almost 50 percent of the total. Among certificates granted in the Title IV for-profit sector, health professions and personal and culinary services account for 78 percent of certificate completers."


Of course, there is controversy over for-profit higher education. The big firms that dominate the sector are, well, for-profit, and they tend to pay their executives well and their faculty not-so-well. A high proportion of students at for-profit institutions are financing their studies with debt, and if they don't complete the degree--which can be a big problem at some for-profit institutions--the students are still on the hook for that debt. Total student debt now exceeds the total amount of credit card debt, and will soon top $1 trillion. In their well-balanced essay, Deming, Goldin, and Katz discuss these issues.


But to repeat my earlier point, we have apparently made a social decision that a combination of student loans and for-profit institutions is the primary method by which the United States will raise college admissions. I would like to see a competitive response to the for-profits from public-sector non-profit higher education. I'd love to see the public sector aggressively increasing non-selective enrollments, offering on-line classes and flexible meeting times for nontraditional college students, using technology and nontenured lecturers aggressively to hold down costs, and expanding certificate and degree programs with a focus on what is demanded in the market. This kind of institutional change is undoubtedly difficult.  But with a few local exceptions, the public higher education sector is reacting too much much like Kodak when that company was first confronted with low-cost competition for film and then with the change to digital photography--and the firm was too slow to adapt.