This is the fourth of five posts on immigration policy. For the first post and an overview, start here.

Discussions of enforcing limits on immigration often seem to begin and end with border security: how many guards, how long a fence, how many arrests and deportations. Such policies have been pursued with vigor since the 1990s, and they appear to have been effective.For example, here's a figure from Pia M. Orrenius and Madeline Zavodny showing that southwest border apprehensions peaked back around 2000, and have had a generally downward trend since then. 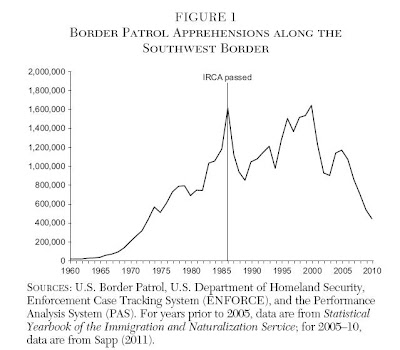 Edward Alden sums up the current situation in "Immigration and Border Control."

"For the past two decades the United States, a country with a strong tradition of limited government, has been pursuing a widely popular initiative that requires one of the most ambitious expansions of government power in modern history: securing the nation’s borders against illegal immigration. Congress and successive administrations—both Democratic and Republican—have increased the size of the Border Patrol from fewer than 3,000 agents to more than 21,000, built nearly 700 miles of fencing along the southern border with Mexico, and deployed pilotless drones, sensor cameras, and other expensive technologies aimed at preventing illegal crossings at the land borders. ... [T]the U.S. borders are far harder to cross illegally than at any time in American history, and the number of people entering illegally has dropped sharply. Evading border enforcement has become more difficult, more expensive, and more uncertain than ever before. ...

The United States will never again be a country with loosely guarded borders. The political coalition in favor of tough border control is strong and probably durable; the threats from terrorism or other transnational crime are severe enough to necessitate effective border measures; and the desire by many to migrate illegally to the United States will remain strong enough that deterrence through enforcement is essential. The challenge, therefore, is how to make border security compatible with a sensible immigration system that strengthens the U.S. economy rather than weakens it."

My own sense of the evidence is that it is time to stop this continually increasing spending on border security and instead move to other ways of discouraging illegal immigration, including better tracking of those who legally enter the country on temporary visas, and steps to assure that employers can reasonably be held accountable for when they hire illegal immigrants.

Many of the writers in the Cato Journal special issue are not enamored of strong efforts to enforce limits on immigration. For example, the Alden essay is insightful on costs and problems of border enforcement, while Jim Harper discusses potential problems with the e-Verify system that lets employers check on the immigration status of potential workers.  However, contributors to the symposium seem often willing to entertain all sorts of alternatives, without a lot of practical skepticism. For example, Bryan Caplan suggests the possibility that how we could allow in very large numbers of immigrants, but make them ineligible to vote? We could also make their descendants ineligible to vote! Or we could not let them vote until their lifetime tax payments reach $100,000. We could impose special higher taxes on immigrants. We could make immigrants ineligible for welfare benefits. We could require tests of English fluency and cultural literacy for immigration. A number of other authors in the issue emphasize the possibilities of large but temporary flows of immigrants, who would sweep back and forth across the border in waves.

I understand the intellectual rationale for these sorts of proposals, but they seem to me overly clever, and thus likely to be impractical. Jagdish Bhagwati likes to quote the Swiss novelist Max Frisch on the subject of how western Europeans let in lots of guestworkers, on the explicit understanding that they could be sent home, but then found that in practical and political terms they could not be deported. Frisch said: "We imported workers and got men instead." The idea of making immigrants and their descendants unable to vote works fine if the immigrants are just "workers," but not so well if they are also human beings. A vision of crowds of immigrants arriving and departing as needed by the economy views those people solely in their role as workers, not as people with a wide range of goals--like falling in love with people and communities, or getting a better education for their children. Ultimately, it does not seem credible to me that such policies will be enforced in the long term. When it comes to practical enforcement, I place my trust in good old-fashioned policies like continued border security, along with visa enforcement and mechanisms for employers to be able to check whether they are hiring U.S. citizens.
Posted by Timothy Taylor at 12:01 PM