The Big Decline in Housing Segregation

Edward Glaeser and Jacob Vigdor document and discuss "The End of the Segregated Century: Racial Separation in America's Neighborhoods, 1890-2010," in Civic Report #66 written for the Manhattan Institute for Policy Research.
Here's a headline graph. Take the two most common measures of residential segregation, the "dissimilarity index"  and the "isolation index" (both explained further in a moment). Apply them to the 10 largest American cities using Census data The pattern that emerges is a large increase in residential segregation  from about  1910 to 1950, segregation remaining at that  high level from about 1950 to 1970, and then a sharp decline in residential segregation from 1970 up through 2010. 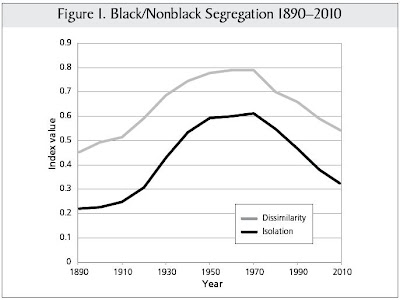 Glaeser and Vigdor summarize the pattern in this way: "Segregation has declined steadily from its mid-century peak, with significant drops in every decade since 1970. As of 2010, the separation of African-Americans from individuals of other races stood at its lowest level in nearly a century. Fifty years ago, nearly half the black population lived in what might be termed a “ghetto” neighborhood, with an African-American share above 80 percent. Today, that proportion has fallen to 20 percent."
How is residential segregation measured?

"Residential segregation can be measured in a variety of ways. The most common method is to form an index that summarizes the level of segregation in a metropolitan area on a scale from zero, where every neighborhood is just as diverse as the entire region, to 100, where individuals of different races never share neighborhoods. Indices differ according to their coding of intermediate situations ... Some indices require more detailed geographical data than others, with the most sophisticated using census information collected on a block-by-block basis.
"This report focuses on two measures—the dissimilarity index and the isolation index—both of which have a long history in social-scientific writing on segregation. The two measures together adequately summarize segregation, being highly correlated with more sophisticated indices, while being simple enough to calculate that even data from the late nineteenth century are sufficiently rich to permit their computation."

What is intuitive interpretation  of a dissimilarity index?

"The dissimilarity index measures the extent to which two groups are found in equal proportion in all neighborhoods. It can be interpreted as the proportion of individuals of either group that would have to change neighborhoods in order to achieve perfect integration. It is the most commonly used segregation measure, first introduced into the sociology literature shortly after World War II."

What is the intuitive interpretation of an isolation index?

"Dissimilarity is not a perfect measure. Consider the following scenario. There are two equal-size neighborhoods in a city: one is 100 percent white; and the other is 98 percent white and 2 percent black. According to the dissimilarity index, this city is fairly segregated, since about half of the black residents would need to move in order to achieve perfect integration. In an important sense, though, the black residents are not isolated—after all, they live in a neighborhood that is 98 percent white.
The isolation index is designed to distinguish this sort of scenario from one where neighborhoods have dramatically different racial character. It measures the tendency for members of one group to live in neighborhoods where their share of the population is above the citywide average. In this hypothetical example, black residents live in a neighborhood that is 2 percent black, which is just 1 percentage point higher than what would be expected under perfect integration. The isolation index would therefore be on the order of 1 percent, rather than 50 percent."

This paper is more about documenting the patterns than about inquiring into underlying causes, but Glaeser and Vigdor do offer an overview of causes.


High levels of residential segregation have been an enormous and legitimate social concern, so the decline in those levels is worth noting and welcoming. But as Glaeser and Vigdor point out, the good news comes with a mournful undertone for those who remember some of the high hopes for housing desegregation back in the 1960s:

"The 1960s were the heyday of racial segregation. During those years, segregation seemed a likely cause of many of the troubles afflicting African-Americans. Segregation was so enormous, and so unfair, that it seemed to create a separate and unequal experience for African-Americans everywhere. During those years, the fight against housing segregation seemed to offer the possibility that once the races mixed more readily, all would be well.

Forty years later, we know that this dream was a myth. There is every reason to relish the fact that there is more freedom in housing today than 50 years ago and to applaud those who fought to create that change. Yet we now know that eliminating segregation was not a magic bullet. Residential segregation has declined pervasively, as ghettos depopulate and the nation’s population center shifts toward the less segregated Sun Belt. At the same time, there has been only limited progress in closing achievement and employment gaps between blacks and whites. ... While the decline in segregation remains good news, far too many Americans still lack the opportunity to achieve meaningful success."

Posted by Timothy Taylor at 9:10 AM