This is the third of four posts based on figures from the 2012 Economic Report of the President. For the first post and an overview, start here.

The U.S. job market has long been famous for its "churn" -- that is, the simultaneously large inflows and outflows out of jobs which suggest a fluid and adjustable labor market. Thus, it's disturbing to observe a long-term trend toward less churn in the U.S. labor market. Here's a figure using the Business Dynamics Statistics from the Bureau of Labor Statistics: 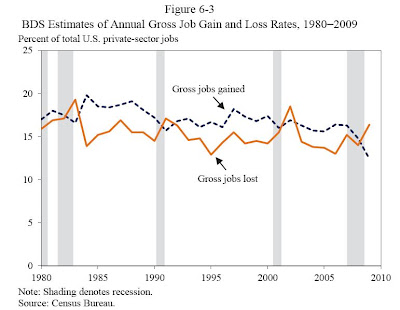 Here's commentary from the Economic Report of the President: "The rates of both gross gains and gross losses have been declining over time. Whereas, on average, 18.2 percent of private-sector jobs in the 1980s were newly created positions in startups or expanding firms, gross job gains fell to 16.8 percent of total private-sector employment in the 1990s and to 15.8 percent between 2000 and 2009 (Figure 6-3). Similarly, gross job losses were slightly more than 16.2 percent of overall private-sector employment in the 1980s but fell to 14.9 percent in the 1990s and then remained largely the same between 2000
and 2009. These secular declines also are apparent when one focuses more narrowly on startups."

Here's a similar pattern from another source: quarterly data from the Business Employment Dynamics (BED) survey. 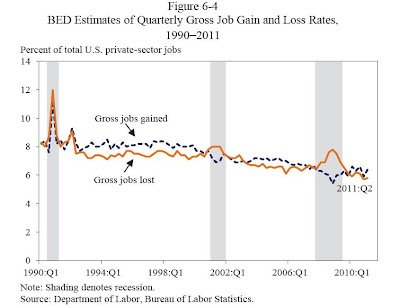 What explains this drop in job churn over time, and is it a cause for concern? The report says (citations omitted): "Now that researchers have documented the long-term secular slowdown in job gains and losses, the underlying reasons for the slowdown and its implications for the future of the U.S. economy are fast becoming the subject of an active debate. One possible reason for the slowdown in job reallocation is the aging of the population. Older workers may be less likely to become entrepreneurs, and research has documented a positive correlation between worker age and job tenure."

An aging workforce probably is part of the explanation. But one also wonders if there isn't another dynamic at work: for a variety of reasons, it may be getting harder to start up a business in the United States, and harder to be an employer. In turn, workers perceive fewer outside opportunities, and become more likely to stick with their present job. Or perhaps the U.S. labor market is becoming less fluid and adjustable in other ways.
Posted by Timothy Taylor at 11:00 AM