Margaret Jacobson and Filippo Occhino of the Cleveland Fed offer a short overview of what is "Behind the Decline in Labor's Share of Income" in the February 2012 issue of Economic Trends.

But this basic fact--labor as two-thirds of economic output--no longer seems to be holding true. It's not just that the ratio is at historic lows in the post-World War II period, as shown in the figure; after all, given the depth and length of the Great Recession, and the sluggishness and sustained high unemployment of the tepid recovery, it's no surprise that the labor share of income would be low about now. But the data seems to show an overall pattern of a dropping labor share of income even before the Great Recession started, and reaching back to the 1980s or the late 1970s. 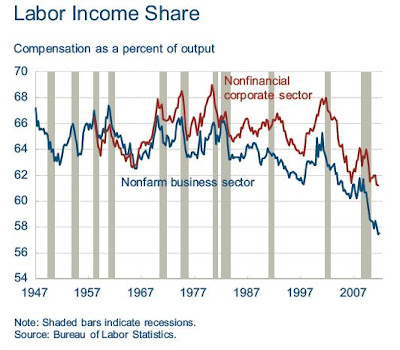 When output is rising faster than labor income, it necessarily follows that labor compensation is rising more slowly that output per hour. Here's the figure. Note that up until about the early 1980s, productivity as measured by output per hour rose more-or-less in step with compensation per hour (although it appears that even then, output/hour was trying to creep ahead). But the gap has expanded since then, and was expanding even before the Great Recession. 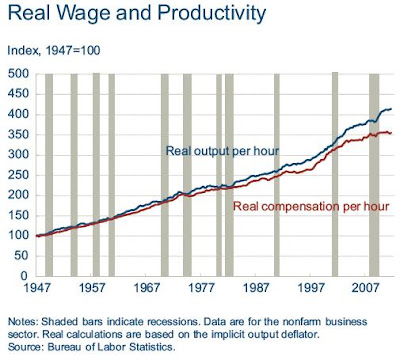 What explains this change? Jacobson and Occhino list the possibilities: "Economists have identified three long-term factors that can explain why the wage-productivity gap has widened and the share of income accruing to labor has declined. The first is the decrease in the bargaining power of labor, due to changing labor market policies and a decline of the more unionized sectors. Another factor is increased globalization and trade openness, with the resulting migration of relatively more labor-intensive sectors from advanced economies to emerging economies. As a consequence, the sectors remaining in the advanced economies are relatively less labor-intensive, and the average share of labor income is lower. The third factor is technological change connected with improvements in information and communication technologies, which has raised the marginal productivity and return to capital relative to labor."

This list seems basically right to me, although my reading of the evidence is that the items are listed in inverse order of importance. But I also find it useful to think about the fall in labor income in reverse, as the rise of capital income. For example, the Dow Jones index roughly tripled from 1980 to 1990 (rising from 900 to 2700), and then more than tripled from 1990 to 2000 (rising from 2700 to 10,800). While the Dow was basically flat over the decade from 2000 to 2010, large non-labor income was generated during the earlier part of the decade by housing prices. While many of us participate in gains in the stock market or the housing market in some ways, the bulk of those gains do tend to flow to those with higher income levels.

But looking ahead, another rapid tripling of stock market, as in the 1980s and again in the 1990s, seems unlikely, as does another housing price bubble. Meanwhile, the U.S. labor market is showing some feeble signs of resurgence, and may well strengthen over the next couple of years. Over the next 3-5 years, I'd expect the labor income share of output to rise--although I don't expect labor income to re-attain the old level of two-thirds of national output in the near- or the middle-term.
Posted by Timothy Taylor at 6:00 AM