Don't Know Nothing About Military Strategy

I don't know anything about issues like the appropriate number of soldiers in the armed forces, or which weapons systems are really needed, or where forces should be based around the world. But I do know something about federal budget numbers. As the political debate unfolds over appropriate levels of defense spending in the years ahead, here are some historical and international perspectives. 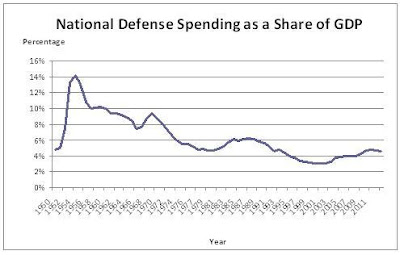 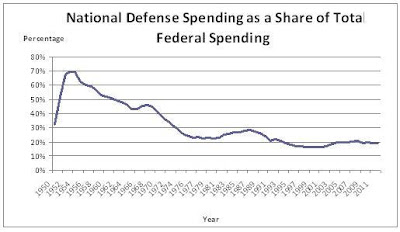 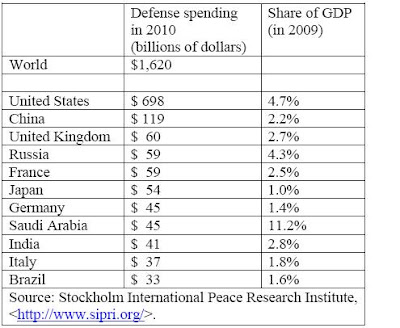 Of course, spending isn't the only variable that matters in national defense: strategy, diplomacy, ideology, economic ties, even personal cross-border ties can affect the likelihood and extent of instability. Defense spending can be quite good at projecting certain kinds of power, but not especially useful at blocking a biological or nuclear weapon that fits in a panel truck or even a large suitcase. That said, these sorts of numbers cut both directions in the debate over levels of defense spending. Those who favor reductions in defense spending over time might take note of the fact that we haven't been living in Eisenhower's world for some time, and U.S. defense spending has a smaller share of the economy and of federal spending than the historical norm. Those who favor higher defense spending might take note of the fact that the U.S. is far and away the largest defense spending nation now--and that many of the other largest spenders are our allies.

Thanks for Danlu Hu for putting together the U.S. defense spending figures over time from the Historical Tables of the President's Budget for 2013.
Posted by Timothy Taylor at 6:00 AM