Putting a Value on State Parks

In the latest issue of Resources magazine, from Resources for the Future, Juha Siikamäki inquires into "State Parks: Assessing Their Benefits."

"Each year, more than 700 million visits are made to America’s 6,600 state parks. ... Using conventional economic approaches to estimate the value of recreation time combined with relatively conservative assumptions, the estimated an annual contribution of the state park system is around $14 billion. That value is considerably larger than the annual operation and management costs of state parks."

Siikamäki's approach goes like this. Start with estimates of how people use their time. Combining data from a number of time use surveys over time provides this overall pattern for hours of nature recreation per person. 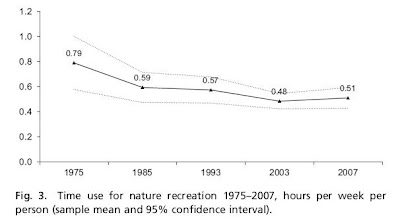 This data on time use can be broken down to the state level. Siikamäki then also created a data base on how state parks have changed over time. "Between 1975 and 2007, about 3,000 new parks totaling about 2 million acres were established in the United States, increasing the total area of the state park system by nearly one-quarter." It's then possible to try to determine the relationship between how changes in state parks affect the how nature recreation time changes in a certain state--using statistical methods to try to hold constant other possible confounding factors.

The Resources article is a highly readable overview of this work. Those who want the gory details need to turn to Siikamäki's more technical article in article in the Proceedings of the National Academy of Sciences, August 23, 2011, "Contributions of the US state park system to nature recreation." Here's the result of the calculation:

Of course, these results, like all statistical results, need to be handled with care. Even if state parks encourage considerable recreation on average, it is surely still true that some state parks have bigger payoffs while others have smaller payoffs. It could be that states where the citizens had a high demand for nature recreation are also the states  that are more likely to add to the state park system--and perhaps the quantity of nature activities would have risen in those states even without the expansion of the state parks. Even if the state parks had not been expanded, people would have done something with their time, so the value of the state parks should be the marginal increase over that alternative use--an inevitably tricky task.


On the other side, by measuring the benefits of state parks purely in terms of recreation benefits leaves out other benefits and thus underestimates total social benefits from state parks.  Siikamäki concludes: "Nature recreation represents only a partial assessment of the full range of ecosystem services produced by natural areas. Examples of other potentially relevant ecosystem services include carbon sequestration and storage through biological processes, contributions to surface and groundwater services, and benefits from preserving endangered and threatened species. A full assessment of ecosystem services from state parks should consider these nonrecreation contributions, yielding an even more comprehensive—and presumably larger—estimate of the value of America’s state park system."
Posted by Timothy Taylor at 12:01 PM