"Medicare is for the elderly and Medicaid is for the poor." I've heard it a million times, and probably said it myself, but of course the distinction isn't quite correct. Medicaid was from the start focused on the "deserving" poor, which at the time was low-income families with children, along with the poor who were also disabled or elderly, but it didn't cover single adults below the poverty line.

The vast majority of Medicaid's spending is not on low-income families of able-bodied adults with children, but instead on those with low incomes who are also blind, disabled, and elderly. The 2010 Actuarial Report on the Financial Outlook for Medicaid reports that in 2009, Medicaid covered 50 million people on average at any given point in time, and had outlays of $380 billion. Thus, the elderly represented about one-tenth of all Medicaid enrollees, but about one-fifth of all Medicaid expenditures. As the Medicaid actuaries report:

"Per enrollee spending for health services was $6,890 in 2009. Per capita spending for non-disabled children ($2,848) and adults ($4,123) was much lower than that for aged ($15,678) and disabled beneficiaries ($16,563) ... While blind or disabled enrollees and aged enrollees are the smallest enrollment groups in Medicaid, they are projected to account for the majority of spending. ... [F]or FY 2009, benefit spending was estimated to be $148.4 billion for blind or disabled enrollees and $74.6 billion for aged enrollees. Combined, spending on these two groups constituted 66 percent of Medicaid expenditures ... Medicaid spending on non-disabled children represented about 20 percent of total Medicaid benefit expenditures, and spending on non-disabled non-aged adults accounted for about 14 percent."

Medicaid is a huge part of the U.S. health care system. The actuaries report that in 2008, "Medicaid spending for that year represented 14.7 percent of total NHE [national health expenditures]. Private health insurance was the largest source of spending on health care in 2008, accounting for 33.5 percent of total NHE, while Medicare paid for 20.1 percent." If you're adding up at home, yes, Medicaid plus Medicare pays a higher share of the nation's health care bills than does private health insurance. At any given time, Medicaid also covers more people than Medicare: in 2009, Medicaid was covering an average of 50 million people at any given time compared to 46 million for Medicare.

However, Medicaid is about to start into two major changes that will drive up its costs. One set of changes is related to the Affordable Care Act of 2009, and the other to the aging of the U.S. population.


One of the main ways in which the Affordable Care Act plans to expand health care insurance to those who not presently have it is through an expansion of who is eligible for Medicaid. The actuaries write:  "The Affordable Care Act will have a substantial effect on Medicaid trends over the next 10 years and beyond. In terms of the magnitude of changes to the program’s projected expenditures and enrollment, it is likely that the Affordable Care Act will be the largest legislative change to Medicaid since the program’s inception." The Affordable Care Act is projected to add about 20 million enrollees to Medicaid by 2019, with roughly three-quarters of them being adults. Medicaid is now funded about two-thirds by the federal government and one-third by state governments, but for the first few years (with no promises for after that time!), the federal government  will pick up essentially 100% of the cost of these additional enrollees.

The issues of "Medicaid and the elderly"  are explored by  Mariacristina  De Nardi, Eric French, John Bailey Jones, and Angshuman Gooptu in the most recent issue of Economic Perspectives, published by the Federal Reserve Bank of Chicago. In particular, Medicaid has become a major provider of long-term care. The authors write:  "The principal public provider of long-term care is Medicaid, a means-tested program for the impoverished. Medicaid now assists 70 percent of nursing home residents and helps the elderly poor pay for other medical services as well. ... Although Medicaid is available only to “poor” households, middle-income households with high medical expenses usually qualify for assistance also. Given the ongoing growth in medical expenditures, Medicaid coverage in old age is thus becoming as much of a
program for the middle class as for the poor ..."


Here's a figure from the actuaries showing Medicaid's share of total U.S. spending in certain markets. Again, notice that Medicaid spending is a lot less about doctor visits for low-income children and a lot more about nursing home care and home health care: 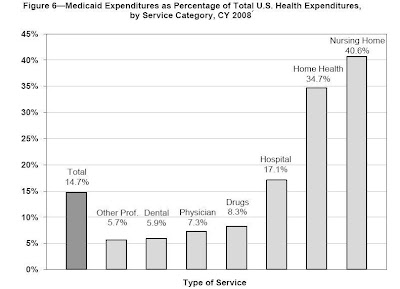 As the actuaries put it: "Medicaid has a major responsibility for providing long-term care because the program covers some aged and many disabled persons, who tend to be the most frequent and most costly users of such care, and because private health insurance and Medicare often furnish only limited coverage for these benefits, particularly for nursing homes. Many people who pay for nursing home care privately become impoverished due to the expense; as a result, these people eventually become eligible for Medicaid."

At least so far, payments for long-term care are not yet a major driver of Medicaid expenses. The front edge of the baby boomer generation is just hitting its retirement years, but the really substantial demand for nursing home care kicks in more at age 85 than at age 65. The Medicaid actuaries write: "As the oldest members of the baby boom generation begin to reach age 65, both the number of aged enrollees in Medicaid and eventually the rate of long-term care spending growth are projected to increase. While the baby boom generation is not estimated to have a major effect on long-term care spending during FY 2010 through FY 2019, the increase in the number of people over age 85 in the next 10 years is expected to do so."

It's worth remembering that unlike Medicare, Medicaid has no dedicated tax or revenue stream. Unlike private health insurance, Medicaid isn't financed by premiums. Instead, the ongoing rise in Medicaid costs will be in direct competition with other government programs funded from general tax revenues.
Posted by Timothy Taylor at 1:30 PM