Parental Leave in Other Countries


The United States has far fewer laws that offer protections to parents with family responsibilities than do most other countries. Alison Earle, Zitha Mokomane, and Jody Heymann discuss "International Perspectives on Work-Family Policies: Lessons from the World’s Most Competitive Economies," in the Fall 2011 issue of the Future of Children. Indeed, the issue is devoted to issues of "Work and Family." From the "Summary" of the Earle, Mokomane, and Heymann article:

Here are some illustrative tables showing policies in these countries. The U.S. does not have paid parental leaves. All of the 14 comparison countries in the table offer such paid leaves for mothers, lasting at least 18 weeks and in some cases more than a year, and replacing at least 25% of salary and up to 100% of salary. Thirteen of the 14 comparison countries offer paid parental leave, ranging at the low end from a few days or a couple of weeks up to more than a year, and replacing from 25% of pay up to 100%. The next figure looks at  leave policies for attending to children's health care. U.S. law does have provisions for breast-feeding breaks, as do 7 of the 14 comparison countries. All of the countries, including the U.S., have provisions for leave to care for children's health needs--but unlike in the U.S., that leave is paid in 11 of the 14 comparison countries. 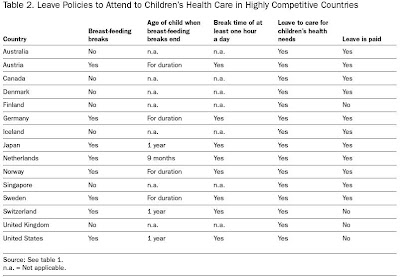 The final table looks at policies on paid annual leave, a weekly day of rest, or night work. These are not policies specifically aimed at parents, but at all workers. The United States has no law guaranteeing paid annual leave, while all 14 of the comparison countries do--often requiring four or five weeks of such leave. Thirteen of the 14 comparison countries also have legal guarantees of at least one day of rest each week. 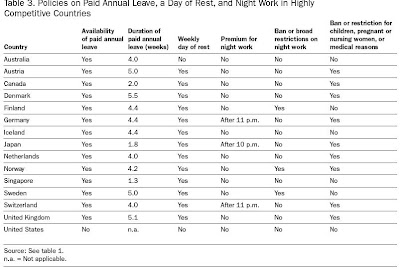 Earle, Mokomane, and Heymann discuss evidence that paternal leave policies of various sorts are associated with improved infant health and lower infant mortality--in part by enabling more breastfeeding, in part by enabling parents to be more involved in preventive and other health care for their children.  They argue that parental leaves help to foster "children’s social, psychological, behavioral, emotional, and cognitive functioning."

I'm enough of an American at heart that some of these international comparisons open my eyes pretty widely. In Germany, you can have more than two years of paid leave for both mothers and fathers? In Austria, Denmark, Sweden, and the United Kingdom, there is a national legal guarantee of five weeks of paid vacation? I'm enough of an economist to wonder about the incentives that such provisions give employers to avoid hiring women of child-bearing age, or to slot young people into into certain jobs where they can be replaced without too much fuss if they disappear for a couple of years. With workers who make middle-income salaries or higher, guarantees of paid vacation can be considered part of their overall compensation, but for low-paid, low-skill workers, such rules may discourage hiring them at all. I'd want to know more about how such policies are designed and enforced before enacting them in the United States.

But it is just  a fact that the U.S. labor market is at the far end of the international spectrum of high-income countries in not offering these kinds of policies. Even with my born-in-America, economist-trained skepticism, I find myself thinking that experimenting with such policies at the firm level, the state level, and even the national level is worth a closer look. After all, the days when American society could count on nearly all mothers to exit the (paid) workforce and spend their time in childcare and homemaking are long behind us.

"I happen to be a student from Germany and just had this topic in school, so I wanted to clarify the laws a bit. You wrote: "I'm enough of an American at heart that some of these international comparisons open my eyes pretty widely. In Germany, you can have more than two years of paid leave for both mothers and fathers?"

"It's actually not quite that extreme. 14 weeks vacation for the mother at 100% pay are standard (6 before birth and 8 after - the 8 after are mandatory - paid by the statutory health insurance). After that, either the mother or the father can stay at home for a year at ~66% previous pay (this is paid by the government). They can switch in that time, for instance mother half the time and father half the time - in that case it goes up to 14 months. Or alternatively one parent can stay at home for 2 years, but then at only ~33% of previous wages. This doesn't change the basic point on the difference between the US laws and those of the other countries of course."  David adds: "The laws can be found in the MuSchG and the BEEG."

"As I am inclined to say, the US, particularly over the last 30 years, has made policy on the basis of making the country be a good place to be a capitalist, while most of the other developed economies have made policy on the basis of making their countries be a good place to be a worker.  Personally, I tend to believe that the latter works out better for social outcomes, although it's possible to go overboard, of course.  Business owners, once forced into the corner where they must have and keep employees, and must pay a living wage, and must contribute as necessary to provide benefits such as universal health care access, are *very* good at finding ways to increase the efficiency of the employees so that the owners still make money: they demand better education, they invest in better equipment, they listen to their workers (eg, Japanese auto companies make their engineers design for easy construction as well as other attributes).  The US has let business owners take the easy way out: drop health insurance, relocate the factory to a different region or foreign country, and so forth."