Gasoline prices are spiking up toward $4 per gallon, so it's a useful time to review prices over the last couple of decades and some international comparisons. Here's a figure I generated using the ever-helpful FRED (Federal Reserve Economic Data) website maintained by the St. Louis Fed showing gasoline prices since 1990. 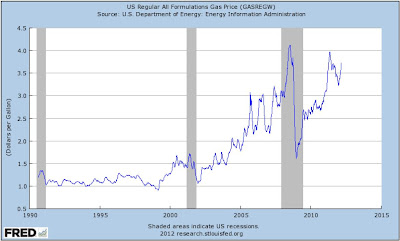 Most supply-and-demand explanations of gasoline markets emphasize that supply often adjusts fairly slowly. The process of searching for and discovering oil, and then drilling, transporting, refining, wholesaling and retailing it, takes many economic interconnections. Thus, when  demand falls in a recession, the production process of oil doesn't drop off sharply--instead, prices fall. At other times, however, a disruption in this chain of supply can create a drop in the quantity that would otherwise have been available later in the process, and so prices rise.

The overall pattern of rising prices through most of the 2000s is usually attributed to the growth of demand for oil outstripping the growth of supply--where much of the rising demand for oil comes from rapidly growing economies like China, India, and Brazil. From this perspective, it seems utterly unsurprising that the price of gasoline has rebounded back near the peaks it reached earlier in 2008.

Although I think most Americans have a general idea that gasoline is often taxed more highly in other countries than it is here, the magnitude of these taxes isn't always well-known. Here's a table from Christopher R. Knittel's article, "Reducing Petroleum Consumption from Transportation," in the Winter 2012 issue of my own Journal of Economic Perspectives, comparing gasoline taxes across countries. The United States taxes gasoline at about 49 cents to the gallon, counting both federal taxes and the average of state taxes. By the time you get to the bottom of the list, you see that countries like the United Kingdom, Germany and Netherlands have gasoline taxes about eight times as high at roughly $4/gallon. Population densities and living patterns are different in the United States than  in these other countries, and I wouldn't advocate raising taxes to those levels.  On the other side, it's hard to believe that phasing in an increase in U.S. gasoline taxes to Canadian levels of 96 cents per gallon would be an unsustainable blow to the U.S. .economy, perhaps with a substantial of the money earmarked for offsetting income tax cuts and part earmarked for long-term deficit reduction. There are a variety of environmental and geopolitical reason why it might be reasonable policy for the U.S. to put some price disincentives in place for petroleum use.

Here's one more figure from Knittel. The horizontal axis of the graph shows the price of gasoline in each country, taxes included. The vertical axis shows the quantity of gasoline used for transportation in each country, measured in gallons per year per capita. This is part of the considerable body of evidence suggesting that when energy prices are higher, people and firms find ways to conserve. 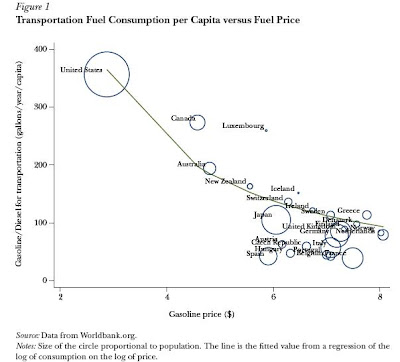 Many Americans do truly hate the idea of higher energy taxes, so I don't expect this kind of proposal to make any political progress. Instead, Americans like to pretend that by setting technology standards to require more fuel efficient cars over time, the country can conserve energy without facing a cost. I explained in a post last week, "Are the New Auto Fuel Economy Standards For Real?" why this less flexible approach actually imposes higher costs as a way of encouraging energy conservation.
Posted by Timothy Taylor at 6:00 AM