Some Facts about American Unions

The Bureau of Labor Statistics published annual report on union membership, "UNION MEMBERS — 2011," in late January.  Here are some facts about American unions in 2011, along with some historical perspective and international comparisons. I'll also mention some of the general lessons I see in these patterns:

First, some highlights from the BLS report (references to the detailed data tables omitted here):

"In 2011, the union membership rate—the percent of wage and salary workers who were members of a union—was 11.8 percent, essentially unchanged from 11.9 percent in 2010 ...

Historically, the unionization rate in the United States shows one big rise, leading to a peak in the early 1950s when about one-third of non-agricultural workers belonged to a union. The pattern has been one of decline ever since. 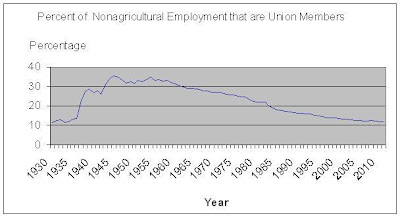 Clearly, the decline in unions has been long and steady, occurring under both political parties. If not for the rise in public sector unions, the decline would have been even more severe. Thus, it doesn't make sense to blame this decline on some single event in the last decade or two or three--it's bigger than that. In the Winter 2008 issue of my own Journal of Economic Perspectives, Barry T. Hirsch offered an explanation in his paper "Sluggish Institutions in a Dynamic World: Can Unions and Industrial Competition Coexist?"  His argument is that overtime, in the dynamic and competitive U.S. markets, formal union rules are too inflexible, and thus impose extra costs on firms which over time make the firms less able to compete. He argues: "If worker-based institutions are to flourish, they must add value and permit companies to perform at levels similar to those obtained under evolving nonunion governance norms."


International comparisons show that the the U.S. economy is something of an outlier in its low levels of union membership. The first column of the table shows the union membership rate in 2006. The second column shows the union "coverage rate," which refers to the total share of workers whose compensation is determined by union bargaining, even if some of those workers are not union members. In the United States, union membership and union coverage are very similar. For example, the BLS report notes that in 2011, the U.S. economy had 14.8 million union members and another 1.5 million workers who did not belong to a union, but whose jobs are covered by a union contract. About half of that 1.5 million are government workers. However, in some other countries, like France, the gap between union membership and union coverage can be quite substantial.  In Japan, it is even possible to be a union member but not to have wages determined by a bargaining contract. 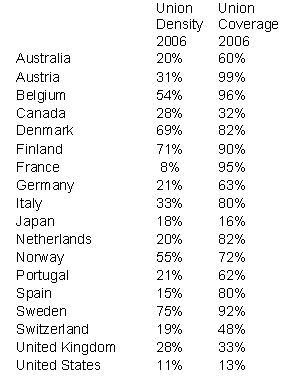 With this wide variation in mind, I've grown cautious over the years about all blanket statements about unionization--positive or negative. In the private sector, American-style unionization has essentially failed to propagate; in the public sector, it has had at best only very partial success. But back in 1970, the great sociologist Albert Hirschman wrote a book called Exit, Voice, and Loyalty. He argued that when members of any organization are faced with conflict, they must choose between expressing their disagreement through "voice" or leaving the organization through "exit." Many American workplaces are essentially organized around the principle where the voice of workers is constrained and the possibility of exit is emphasized. I sometimes wonder if a different kind of American labor organization might do a better job of using voice to improve productivity and in that way raise the compensation of its members.


Source note: Thanks to Danlu Hu for putting together the time series graph of unionization rates over time and the data table on international comparisons.

For unionization rates over time, the data from 2001 to 2011 is readily available at the Bureau of Labor Statistics website. Data on U.S. union membership going from 1930 to 1994.is available at
<ftp://146.142.4.23/pub/special.requests/collbarg/unmem.txt>.  The remaining data can be found by hunting around the BLS website, or else by looking at the 2004 paper by Gerald Mayer, "Union Membership Trends in the United States."


The data on international comparisons is from the Data Base on Institutional Characteristics of Trade Unions, Wage Setting, State Intervention and Social Pacts, 1960-2010, maintained by the  (ICTWSS), available here at the website of the Amsterdam Institute for Advanced Labor Studies.