Robert Allen starts off his article on "Technology and the great divergence: Global economic development since 1820" by asking a classic question: Why have low-income countries been seemingly so slow to adopt the technologies for increased production that exist in high-income countries? The article appears in the January 2012 issue of Explorations in Economic History.  At least for now, Elsevier is allowing the article to be freely available here, but many academics will also have access through their libraries.

Some of the possible answers are that cultural factors, perhaps like Weber's "Protestant work ethic," cause some countries rather than others to adopt new technology. Or perhaps institutional factors like a legacy of property rights and representative government make some countries likelier to develop technology. Allen argues a different view: "This paper explores an alternative explanation of economic development based on the character of technological change itself. While the standard view assumes that technological progress benefits all countries, this paper contends that much technological
progress has been biased towards raising labor productivity by increasing capital intensity. The new technology is only worth inventing and using in high wage economies. At the same time, the new technology ultimately leads to even higher wages. The upshot is an ascending spiral of progress in rich countries, but a spiral that it is not profitable for poor countries to follow because their wages are low."

Simple examples of this phenomenon abound. It is cost effective to install price scanners in U.S. supermarkets, because it saves the time of cashiers, as well as purchasing and accounting workers behind the scenes. But for a low-income country with much lower wages, saving the time of workers isn't worth such an investment. Multiply this example all across the economy. 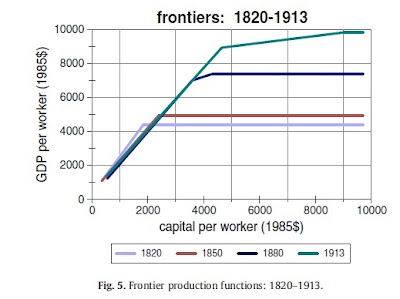 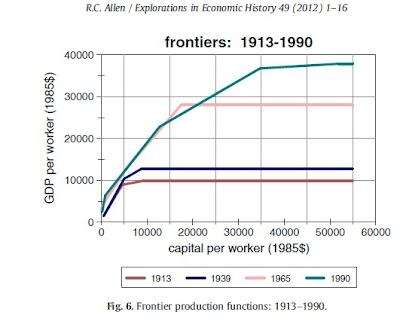 In this perspective, technology is quite transferable between countries with roughly similar capital to worker ratios: for example, this helps to explain the convergence in per capita GDP among high-income economies in recent decades. However, low-income countries find that the technology invented by high-income countries inappropriate for their circumstances; indeed, less capital-intensive technology from 50 or 100 years ago often seems more appropriate for them. This perspective also helps to explain why a ultra-high savings rate has often been so important as a precursor to rapid growth in places like Japan in mid-twentieth-century, and then to the East Asian "tiger" economies, and then to China. High savings creates a high capital to worker ratio, and thus makes it much more possible to leapfrog forward by adopting technologies closer to the frontier.

Looking ahead, an intriguing question is whether rapidly emerging economies around the world can become their own source of innovation: that is, can they take their high savings rates and draw upon world technological expertise to create a new kind of cutting-edge innovation aimed at their own home market. Can the emerging countries forge their own technological path? The Economist magazine has been predicting for the last couple of years that this process is now underway. For example, the April 15, 2010 issue had a lengthy "Special Report" called "The new masters of management: Developing countries are competing on creativity as well as cost. That will change business everywhere." Here's a flavor of the argument:

"Thirty years ago the bosses of America’s car industry were shocked to learn that Japan had overtaken America to become the world’s leading car producer. They were even more shocked when they visited Japan to find out what was going on. They found that the secret of Japan’s success did not lie in cheap labour or government subsidies (their preferred explanations) but in what was rapidly dubbed “lean manufacturing”. While Detroit slept, Japan had transformed itself from a low-wage economy into a hotbed of business innovation. Soon every factory around the world was lean—or a ruin. ...

"Now something comparable is taking place in the developing world.... Emerging countries are no longer content to be sources of cheap hands and low-cost brains. Instead they too are becoming hotbeds of innovation, producing breakthroughs in everything from telecoms to carmaking to health care. They are redesigning products to reduce costs not just by 10%, but by up to 90%. They are redesigning entire business processes to do things better and faster than their rivals in the West.

"As our special report argues, the rich world is losing its leadership in the sort of breakthrough ideas that transform industries. This is partly because rich-world companies are doing more research and development in emerging markets. Fortune 500 companies now have 98 R&D facilities in China and 63 in India. IBM employs more people in developing countries than in America....

"Even more striking is the emerging world’s growing ability to make established products for dramatically lower costs: no-frills $3,000 cars and $300 laptops may not seem as exciting as a new iPad but they promise to change far more people’s lives. This sort of advance—dubbed “frugal innovation” by some—is not just a matter of exploiting cheap labour (though cheap labour helps). It is a matter of redesigning products and processes to cut out unnecessary costs. In India Tata created the world’s cheapest car, the Nano, by combining dozens of cost-saving tricks."