Japan Has a Trade Deficit?!?

Japan ran a merchandise trade deficit in 2011! I missed the news when it was announced in January, and could hardly believe it. Japan running large trade surpluses has been one of the few constants of the last several decades, through good times and bad.  Here's an illustrative figure from the Daily Yomiuri: 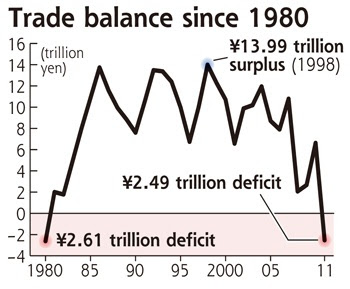 Of course, this event comes with some "buts" attached. The trade deficit largely arose from a onetime event: Japan's horrendous earthquake and tsunami in March 2011, which led industrial production and exports to fall while imports of natural gas rose. In addition,this trade deficit only involves merchandise trade: if one looks at the overall current account balance, which also includes income from foreign investments, Japan still shows a surplus.

But even if Japan returns to merchandise surpluses in 2012 or 2013, the days of perpetual surpluses in Japan seem numbered. If one squints just a bit at the figure above, one can imagine an overall downward trend in those trade surpluses since the late 1990s. At a fundamental level, a trade surplus means that an economy is producing more than it is consuming--and exporting the rest. But Japan is a rapidly aging society with a low birthrate where the size of the workforce topped out in 1998 and has been shrinking since then.  Japan's government forecasts that the total population of the country will decline by one-quarter in the next 40 years, while the share of Japan's population over age 65 will rise
from about 23% now to almost 40% by 2050. With this demographic outlook, it seems likely that Japan will become a country that will start to live off some of its vast accumulated savings, consuming more than it produces and running trade deficits, in the not-too-distant future.
Posted by Timothy Taylor at 2:00 PM