The U.S. and Europe: Productivity Puzzles and Information Technology

From the 1970s into the 1990s, productivity levels in Europe, as measured by output per hour, was converging with the United States. But since the mid-1990s, the U.S. productivity lead has been expanding. 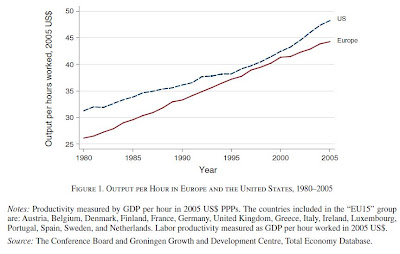 Why? Nicholas Bloom, Raffaella Sadun, and John Van Reenen try to answer that question in "Americans Do IT Better: US Multinationals and the Productivity Miracle," which appears in the February 2012 issue of the American Economic Review. The article isn't freely available on-line, although many in academia will have access through a library subscription. Part of the answer is that the resurgence of U.S. productivity since about 1995 has been driven by industries that either make or use information and communications technology. As measured by the total stock of information technology capital divided by hours worked, the U.S. economy has opened a larger lead over Europe. 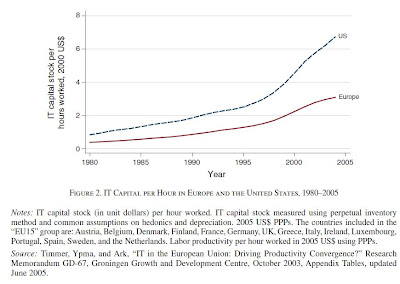 These patterns are fairly well-known in the economics literature on determinants of economic growth. For example, in the Winter 2008 issue of my own Journal of Economic Perspectives, which is freely available on-line courtesy of the American Economic Association, Dale W. Jorgenson, Mun S. Ho, and Kevin J. Stiroh offer "A Retrospective Look at the U.S. Productivity Growth Resurgence," which discusses how the resurgence in U.S. productivity growth in the mid-1990s was first led by productivity increases in the information-technology-producing sector, and then was led by productivity increases in industries that made intensive use of information technology. In that same issue, Bart van Ark, Mary O’Mahony, and Marcel P. Timmer discuss "The Productivity Gap Between Europe and the United States: Trends and Causes." They discuss how European productivity was converging with U.S. levels, until it started diverging, and point to a possible role for information technology, along with issues related to the role of information technology and differences in labor and product market regulation.

In their just-published article, Bloom, Sadun, and  Van Reenen pose the question, and their answer, this way (footnotes omitted):

"Given the common availability of IT throughout the world at broadly similar prices, it is a major puzzle why these IT related productivity effects have not been more widespread in Europe. There are at least two broad classes of explanation for this puzzle. First, there may be some “natural advantage” to being located in the United States, enabling firms to make better use of the opportunity that comes from rapidly falling IT prices. These natural advantages could be tougher product market competition, lower regulation, better access to risk capital, more educated or younger workers, larger market size, greater geographical space, or a host of other factors. A second class of explanations stresses that it is not the US environment per se that matters but rather the way that US firms
are managed that enables better exploitation of IT (“the US management hypothesis”). These explanations are not mutually exclusive. ..."

"Nevertheless, one straightforward way to test whether the US management hypothesis has any validity is to examine the IT performance of US owned organizations in a European environment. If US multinationals partially transfer their business models to their overseas affiliates—and a walk into McDonald’s or Starbucks anywhere in Europe suggests that this is not an unreasonable assumption—then analyzing the IT performance of US multinational establishments in Europe should be informative. Finding a systematically better use of IT by American firms outside the United States suggests that we should take the US management hypothesis seriously. ...

We report that foreign affiliates of US multinationals appear to obtain higher productivity than non-US multinationals (and domestic firms) from their IT capital and are also more IT intensive. This is true in both the UK establishment-level dataset and the European firm-level dataset. ... Using our new international management practices dataset, we then show that American firms have higher scores on “people management” practices defined in terms of promotions, rewards, hiring, and firing. This holds true for both domestically based US firms as well as US multinationals operating in Europe. Using our European firm-level panel, we find these management practices account for most of the higher output elasticity of IT of US firms. This appears to be because people management
practices enable US firms to better exploit IT."

They carefully add in a footnote: "It is plausible that higher scores reflect “better” management, but we do not assume this. All we claim is that American firms have different people management practices than European firms, and these are complementary with IT."

This work is part of a longer-term project of these authors, which seeks to spell out what is meant by "good management," and then to use survey data to figure out where "good management is being practiced. In a Winter 2010 article in my own journal,  Bloom and Van Reenen offer a useful overview of this work in "Why Do Management Practices Differ across Firms and Countries?"

They describe how they try to measure good management, using 18 different categories "which focuses on aspects of management like systematic performance monitoring, setting appropriate targets, and providing incentives for good performance." Their group conducts interviews with middle-level corporate managers, and ranks firms on a scale of 1-5 in each of these 18 categories. One of their findings is that average management scores for U.S. firms are the highest in the world.

It sometimes seems to me, reading the news, that American firms are managed by time-serving functionaries who run the gamut from myopic to venal. But like most Americans, my direct experience with companies operating in the rest of the world is almost nonexistent. By international standards, managers of U.S. firms as a group may well be among the best in the world.
Posted by Timothy Taylor at 6:00 AM