And over these 25 years, the number of full-time equivalent students in public higher education has risen from about 7 million back in 1986 to almost 12 million in 2011. 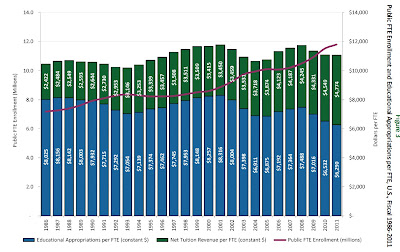 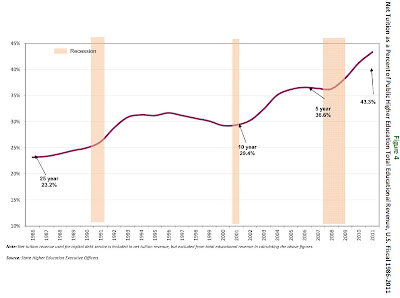 This pattern may be here to stay. As the report states: "In the past decade these two recessions and the larger macro-economic challenges facing the United States have created what some are calling the “new normal” for state funding for public higher education and other public services. In the “new normal” retirement and health care costs simultaneously drive up the cost of higher education, and compete with education for limited public resources. The “new normal” no longer expects to see a recovery of state support for higher education such as occurred repeatedly in the last half of the 20th century. The “new normal” expects students and their families to continue to make increasingly greater financial sacrifices in order to complete a postsecondary education. The “new normal” expects schools and colleges to find ways of increasing productivity and absorb ever-larger budget cuts, while increasing degree production without, we hope, compromising quality."

I would add only a couple of thoughts:

1) Almost everyone believes, or claims to believe, that the economic future of the United States is intertwined with building greater human capital. But that isn't reflected in our spending choices. I'd be the first to say that spending isn't everything--but it's something! Here's a post from July 19, 2011, on "How the U.S. Has Come Back to the Pack in Higher Education." The U.S. used to be the world leader in share of population going to higher education, but no longer.


2) The main budgetary mechanism for encouraging additional higher education is using student loans. This avoids adding to direct spending for higher education, but places a greater share of the risk of not completing a degree, or not having the degree lead to a well-paid job, on the student. Also, public higher education isn't expanding fast enough to absorb those who want to try college, so many of those who receive these loans are headed to the for-profit educational system. Here's a February 23, 2012, post on "For-Profit Higher Education."
Posted by Timothy Taylor at 6:00 AM