Today, the U.S. Supreme Court is scheduled to start hearing the oral arguments over President Obama's signature health-care  reform legislation. I'll save you from my personal uninformed blathering about constitutional law--it will doubtless be easy to find such opinionizing elsewhere on the web. But as a backdrop, it seemed useful to note the basic fact that in the U.S., employer-provided health insurance is fading. 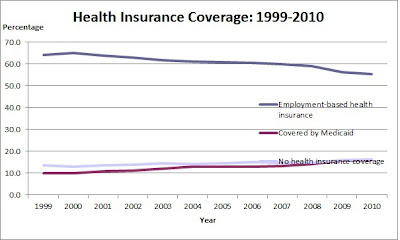 The overall pattern of the Census Bureau figures are replicated by other data, like the phone surveys done for the National Institute for Health Care Reform, and reported in its March 2012 report "Great Recession Accelerated Long-Term Decline of Employer Health Coverage," by Chapin White and James D. Reschovsky. As White and Reschovsky emphasize:

"The recent experience with employer-sponsored health insurance could be viewed as an acute illness aggravating a chronic condition. The acute illness—the sluggish economy and weak employment situation—likely will resolve at some point. But the underlying chronic condition—rising health care costs—likely will persist. Rising health care costs help explain why employers have become less and less likely to offer employer-sponsored coverage as a fringe benefit. Rising costs also have prompted employers to require workers to contribute a larger share of premiums and shoulder increased patient cost sharing at the point of service through higher deductibles, coinsurance and copayments. If health care cost increases continue to outpace wage increases, more workers are likely to conclude that health coverage is not worth the cost. ...
"There has been vigorous debate about the effects of national health reform on employer-sponsored insurance. The best estimates project that health reform will have little net impact, but estimates vary widely. The debate, however, often misses a key point—employer-sponsored insurance is likely to continue to erode with or without health reform, especially among lower-income families and those employed by small firms. ... Perhaps more central to the long-term future of employer-sponsored insurance is whether the health care delivery and payment system reforms, which are other important components of health reform, succeed in slowing the growth of health care costs and health insurance premiums faced by employers and employees."

It's worth remembering, for those who haven't read the history, that the predominance of employer-provided health insurance in the U.S. economy is an historical accident. Melissa Thomasson offers a nice overview in "From Sickness to Health: The Twentieth-Century Development of U.S. Health Insurance," in the July 2002 issue of Explorations in Economic History, but that's not freely available on-line. However, Thomasson offers a brief overview at the Economic History Association website here.

Thomasson points out that the number of Americans with health insurance went from 15 million in 1940 to 130 million in 1960. Blue Cross/Blue Shield plans began to be established in the 1930s. Then in World War II, the fateful decision was made to encourage employers to provide health insurance, and not to tax individuals on the value of that health insurance they received. Here's Thomasson:


"During World War II, wage and price controls prevented employers from using wages to compete for scarce labor. Under the 1942 Stabilization Act, Congress limited the wage increases that could be offered by firms, but permitted the adoption of employee insurance plans. In this way, health benefit packages offered one means of securing workers. ... [I]n 1949, the National Labor Relations Board ruled in a dispute between the Inland Steel Co. and the United Steelworkers Union that the term "wages" included pension and insurance benefits. Therefore, when negotiating for wages, the union was allowed to negotiate benefit packages on behalf of workers as well. This ruling, affirmed later by the U.S. Supreme Court, further reinforced the employment-based system.

I have no insight into how the U.S. Supreme Court will rule on the Obama health care legislation. But the U.S. health care system continues to face severe problems: tens of millions of uninsured Americans with their share of the U.S. population rising, rises in health care costs that continually outstrip inflation, and the ongoing decline of employer-provided health insurance, the main mechanism through which a majority of Americans have received their health insurance in the last half-century. Whether the Affordable Care Act is ruled constitutional or not, it's abundantly clear that it won't be a final answer to these issues; indeed, it may well end up being a transitional piece of legislation that needs to be thoroughly revisited and reworked. For example, the Congressional Budget Office recently estimated that under the Affordable Care Act, after taking into account that some firms will expand health insurance coverage and others will contract or not offer it, by 2019-2022, about 3-5 million fewer people on net will have employer-sponsored coverage as a result of the law.


Note:  Thanks to Danlu Hu for putting together the figure on health insurance coverage.
Posted by Timothy Taylor at 6:00 AM