I've long believed that the main problems with expanding nuclear power related to health and safety concerns: for example, the small chance of a plant malfunctioning, along with issues related to waste disposal and possible links between nuclear power technology and weapons technology. But Lucas Davis argues persuasively in "Prospects for Nuclear Power" in the Winter 2012 issue of my own Journal of Economic Perspectives, which is freely available on-line courtesy of the American Economic Association, that I've been assuming too much. Here's Davis (citations omitted):

"Nuclear power has long been controversial because of concerns about nuclear accidents, storage of spent fuel, and about how the spread of nuclear power might raise risks of the proliferation of nuclear weapons. These concerns are real and important. However, emphasizing these concerns implicitly suggests that unless these issues are taken into account, nuclear power would otherwise be cost effective compared to other forms of electricity generation. This implication is unwarranted. Throughout the history of nuclear power, a key challenge has been the high cost of construction for nuclear plants. Construction costs are high enough that it becomes difficult to make an economic argument for nuclear even before incorporating these external factors. This is particularly true in countries like the United States where recent technological advances have dramatically increased the availability of natural gas. The chairman of one of the largest U.S. nuclear companies recently said that
his company would not break ground on a new nuclear plant until the price of natural gas was more than double today’s level and carbon emissions cost $25 per ton. This comment summarizes the current economics of nuclear power pretty well. Yes, there is a certain confluence of factors that could make
nuclear power a viable economic option. Otherwise, a nuclear power renaissance seems unlikely."

The argument from Davis is complemented by some other recent discussions of nuclear power. The
Federation of American Scientists has a report out on  The Future of Nuclear Power in the United States, edited by Charles D. Ferguson and Frank A. Settle. The most recent issue of the Economist magazine (March 10) has a 14-page cover story on "Nuclear Power: The Dream that Failed."
Finally, a Report to the Secretary of Energy by the Blue Ribbon Commission on America's Energy Future was released in late January. 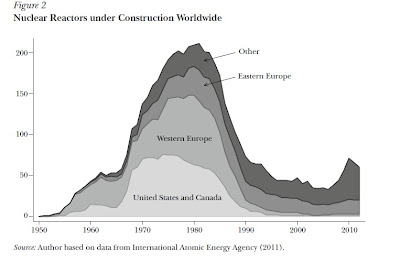 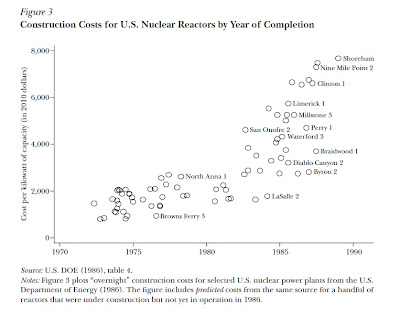 Of course, it's not possible to separate cleanly the safety concerns over nuclear power from these cost issues: additional safety precautions--and the accompanying paperwork--are part of what drives up costs. But perhaps the more fundamental story here is that technological progress in nuclear power hasn't been increasing fast enough to assuage concerns about safety and to drive down costs. Stephen Maloney digs into this in some detail in Chapter 2 of the FAS report, "A Critical Examination of Nuclear Power's Costs."

"Since the nuclear industry’s inception more than 50 years ago, its forecasts for costs have been consistently unreliable. The “first generation” plants, comprising both prototype reactors and the standard designs of the 1950s-1960s, failed to live up to promised economics. This trend continued with the construction of Generation II plants completed in the 1970s, which make up the present nuclear fleet.

"First, the total costs were far higher than for coal-generated electricity. In particular, the capital cost of nuclear plants built through 1980 were, on average, 50 percent higher than comparably-sized coal-fired plants, adjusting for inflation and including backfits to meet Clean Air Act standards. Second, there were extraordinary cost escalations over the original low cost promises. Nuclear plant construction costs escalated approximately 24 percent per calendar year compared to 6 percent annual escalation for coal plants. Third, the economies of scale expected were not achieved in the Generation II designs. The scale-up of nuclear plants brought less than half the economic efficiencies projected.

"In addition, over 120 nuclear units, approximately half the reactors ordered, were never started or cancelled. The total write-offs were more than $15 billion in nominal dollars. ... In the late 1970s, the Atomic Industrial Forum (AIF), predecessor to the Nuclear Energy Institute, identified the main drivers of unmet expectations as growing understanding of nuclear accident hazards, failure of regulatory standardization policies, and increased documentation standards to ensure as-built plants actually met
safety standards. The combined effects doubled the quantities of materials, equipment, and labor needed, and tripled the magnitude of the engineering effort for building a nuclear power plant."

Of course, it's possible to sketch business and technological scenarios under which nuclear power plants of the future use simpler, safer designs, which combine with economies of scale in production to drive down costs. But such predictions haven't held true over the history of nuclear power, and they don't seem to be holding true recently, either. Here's one of many examples, from Maloney:

"In June 2006, a consortium of companies announced plans to build two more reactors at the South Texas Project site for an estimated cost of $5.2 billion. NRG, the lead company, made history by becoming the first company to file an application with the NRC. CPS Energy, a municipal utility, was one of its partners. In October 2007, CPS Energy’s board approved $206 million for preliminary design and engineering. In June 2009, NRG revised the estimate to $10 billion for the two reactors, including finance charges. A few weeks later, this estimate rose to $13 billion, including finance charges. Later that year, the estimate reached $18.2 billion ..." Cost overruns of similar magnitude aren't just a U.S. phenomenon; for example, they also have occurred at recent nuclear power projects in France and in Finland.

To be sure, there are promising new nuclear technologies out there. One hot topic is small modular reactors, discussed both in the Economist article and by Daniel Ingersoll in Chapter 10 of the FAS report. But at some point, a degree of skepticism seems appropriate. The Economist has a wonderful quotation from Admiral Hyman Rickover, who drove the process that created America's nuclear submarines, and commented back in the 1950s:

"An academic reactor or reactor plant almost always has the following basic characteristics: (1) It is simple. (2) It is small. (3) It is cheap. (4) It is light. (5) It can be built very quickly. (6) It is very flexible in purpose. (7) Very little development will be required. It will use off-the-shelf components. (8) The reactor is in the study phase. It is not being built now. On the other hand a practical reactor can be distinguished by the following characteristics: (1) It is being built now. (2) It is behind schedule. (3) It requires an immense amount of development on apparently trivial items. (4) It is very expensive. (5) It takes a long time to build because of its engineering development problems. (6) It is large. (7) It is heavy. (8) It is complicated."

Finally, arguments over appropriate disposal of nuclear waste will surely continue. For an overview of these issues, a useful starting point is the Report to the Secretary of Energy by the Blue Ribbon Commission on America's Energy Future that was released in late January. Personally, I didn't find the Commission report to be especially encouraging about resolving these issues. For example, the first recommendation is to start a process of encouraging communities to volunteer for being nuclear waste disposal sites, which they think might take 15-20 years. Having just watched the argument over a possible repository at Yucca Mountain in Nevada run for 25 years, before the decision of the Obama administration to halt that process, this time frame seems optimistic. Of course, there are alternatives: consolidated storage facilities, and technologies for processing nuclear waste. But the alternatives aren't cost-free, either.

Nuclear power isn't going away. Plants that have been working well still have several decades to run, and the marginal costs of running them are now low. Additional nuclear power plants will be built in countries where the government makes it a priority, or perhaps in some settings where other sources of power are extremely high cost. But as the U.S. enters what seems to be a time of cheap and plentiful natural gas, building a substantial number of new nuclear power plants in this country seems highly unlikely.
Posted by Timothy Taylor at 6:00 AM