What Should Banks Be Allowed To Do?

Charles Morris offers a nice overview of the course of bank regulation in the last century or so in "What Should Banks Be Allowed To Do?" It appears in the Fourth Quarter 2011 issue of the Economic Review published by the Federal Reserve Bank of Kansas City.

For me, the article serves two useful purposes. First,  it's a reminder of why bank deregulation in the 1980s and 1990s wasn't some clever ploy by the financial-sector lobbyists, but was absolutely necessary given the evolution of the industry at that time. To be sure, the deregulation could have been carried out in different ways, posing different risks, but some kind of deregulation was unavoidable. Second, it makes the case for limiting what banks are allowed to so. I'm completely persuaded that the proposed reform would make the banking sector safer and with less risk of needing a bailout, but I'm less sure that the reform would make the financial sector as a whole safer. Let me say a bit more about each of these, drawing heavily on Morris's exposition.

The banking sector as it emerged from the 1930s had five characteristics salient for the discussion here: 1) it was overseen by bank regulators for safety; 2) it had access to a public safety net of emergency loans from the Fed and deposit insurance; 3) it was forbidden to go into other financial areas like investment banking, securities dealing, or insurance; 4) it faced legal limits on the insurance it could pay on deposits; and 5) it faced geographic restrictions on branching across state lines and within states. In short, it was an industry that was shielded from competition, limited in what it could do, and heavily regulated.

In the 1970s, the wheels began to come off this wagon. Those who wished to save money began to seek out investment options like mutual funds, including money market mutual funds, and insurance companies. Banks were limited in the interest rate they could pay, and inflation was high. Banks began to hemorrage deposits. Those who wished to borrow money found other options, too. They borrowed through commercial paper, through high-yield bonds, and through securitized markets including mortgage-backed securities and asset-backed securities. Separate finance companies made car loans and loans for retail purchases. Other companies financed trade receivables.

In short, both the savers and the borrowers were migrating outside the banking industry. Instead, the process of financial intermediation between savers and borrowers was happening outside the banking industry, in what came to be called the "shadow banking" sector.  If the banks had not been deregulated and allowed to compete in this new financial sector--at least in some ways--the banks themselves would have shrunk dramatically and a very large part of the U.S. saving and borrowing would have passed completely outside the purview of the bank regulators.

As banks were allowed to compete across the financial sector more broadly, starting in the 1980s, the industry began to consolidate. This made some sense: when banks were allowed to open branches across states and across state lines, for example, not as many small banks were needed. But the top banks not only became very large, but an ever-growing share of their assets were outside the traditional business of banking. Here's how Morris summarizes how the industry evolved (footnote omitted):

"Technological improvements, interstate banking, and the GLB [Graham-Leach-Bliley] Act resulted in fewer banks and a much more concentrated banking industry, with the largest BHCs [bank holding companies] ultimately engaging in more varied and nontraditional activities. For example, the number of banks fell from about 12,500 in 1990 to about 6,400 in 2011. The share of industry assets held by the 10 largest BHCs rose from about 25 percent in 1990 to about 45 percent in 1997 (just before the GLB Act) and to almost 70 percent in 2011. The share of loans and deposits of the top 10 BHCs
also rose sharply (Table 1). In addition, only four of the 10 largest BHCs that existed before the passage of the GLB Act remain today (Citigroup, JPMorgan Chase, Bank of America, and Wells Fargo), with those four BHCs having acquired five of the other top 10 BHCs.

"Table 1 also shows how the activities of the 10 largest BHCs have changed in the past 14 years. In 1997, the share of banking assets relative to total assets at these companies was 87 percent, with only one company having a share less than 80 percent. Today, the share of banking assets is 58 percent, with only two BHCs having a share greater than 80 percent." 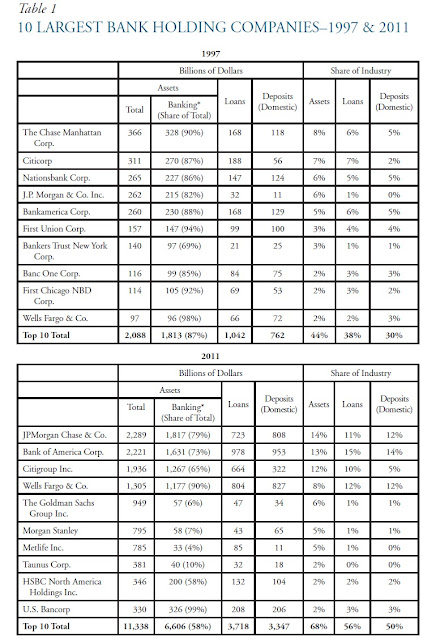 Morris's diagnosis and proposed solution are straightforward. Bank holding companies have gotten into too many risky financial activities, and so should be restrained. But Morris is also clearly and sensibly aware that just trying to turn back the clock to 1930s-style regulated banking isn't possible. That toothpaste is out of the tube. He suggests that banks be allowed to pursue three areas of business:


Conversely, Morris argues that banks be barred from three other areas:

The key distinction here for Morris is that underwriting securities and providing advice are largely fee-based services. They don't involve putting much of a bank's capital at risk. Dealing, market-making, hedge funds, and private equity all involve taking risks with capital that are harder both for the institution to understand and for regulators to monitor.

Morris's proposal is certainly sensible enough, but it does leave me with a couple of questions. First, if banks were holding lots of mortgage loans, as they clearly could be under Morris's proposal, then they would have been vulnerable to a meltdown of housing prices like the one that has occurred. Thus, it's not clear to me that anything in this proposal would have limited the very aggressive home lending that occurred or the price meltdown afterward. Indeed, the sort of limited banks Morris advocates might in some ways have been relatively even more exposed to losses in the housing market.

Second, Morris's proposal, like all "narrow bank" proposals, would clearly make the banking sector safer. But one of the disturbing facts about the financial troubles of 2008 was that it wasn't just commercial banks that were deemed to be systemically important to the U.S. economy: it was also investment banks like Bear Stearns, money market funds, insurance companies like AIG, brokers that sell Treasury bonds, and others. Focusing on banking is all very well, but the shadow banking sector and the potential risks that it poses aren't going away.
Posted by Timothy Taylor at 6:00 AM