International Poverty: Progress and a Puzzle 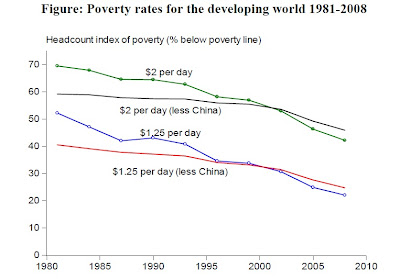 The idea of measuring poverty as $1.25 per day or $2 per day may shock some Americans. After all, In contrast, in the United States the poverty threshold in 2011 for a three-person family, single parent with two children, was $18,123, which works out to about $16.50 per person per day. But as the report explains: "$1.25 is the average of the national poverty lines found in the poorest 10-20 countries.
Using this line, poverty in the world as a whole is being judged by what “poverty” mean
in the world’s poorest countries. Naturally, better off countries tend to have higher poverty lines than this frugal standard. $2 a day is the median poverty line for all developing countries."

The reduction in poverty rates is clearly good news, but the pattern of reduction in poverty rates across countries poses a puzzle that Martin Ravallion raises in "Why Don’t We See Poverty Convergence?" in the February 2012 issue of the American Economic Review. The article isn't freely available on-line, although many academics will have access through their libraries. He sets up the discussion of the puzzle this way"

"Two prominent stylized facts about economic development are that there is an advantage of backwardness, such that in a comparison of two otherwise similar countries the one with the lower initial mean income will tend to see the higher rate of economic growth, and that there is an advantage of growth, whereby a higher mean income tends to come with a lower incidence of absolute poverty. Past empirical support for both stylized facts has almost invariably assumed that the dynamic processes for growth and poverty reduction do not depend directly on the initial level of poverty. Under that assumption, the two stylized facts imply that we should see poverty convergence: countries starting out with a high incidence of absolute poverty should enjoy a higher subsequent growth rate in mean consumption and (hence) a higher proportionate rate of poverty reduction. That poses a puzzle. The data on poverty measures over time for 90 developing countries assembled for this article reveal little or no sign of poverty convergence."

Here is Ravallion's figure to illustrate the point. The horizontal axis has poverty rates for 90 countries, mostly from the 1980s and 1990s as data became available. The vertical axis shows the decline in poverty rates from the start of the data up to 2005. Notice that the best-fit line doesn't show that countries which started from higher levels of poverty have larger reductions in poverty: if anything, the relationship goes a bit the other way. 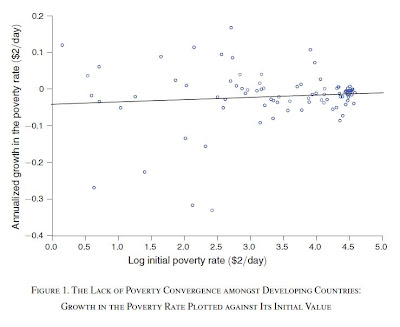 Ravallion puts it this way (citation omitted): "The overall poverty rate of the developing world has been falling since at least 1980, but the proportionate rate of decline has been no higher in its poorest countries." This finding suggests that while poverty rates are diminishing over time, there is no particular reason based on past patterns to expect that the poverty rates will fall more quickly where poverty is greatest. Ravallion offers the clear implication: There do often seem to be "advantages of backwardness," which relatively poorer countries can take advantage of global knowledge and market to reach a faster growth rate, but there is apparently also a drag of high poverty rates, in which the existence of a high poverty rate makes it harder for a country to reduce its poverty rate further. These factors tend to offset each other, and as a result, the poorer countries don't in fact reduce their poverty rates faster.