For starters, Food Stamps have a new name. The 2008 farm bill changed the name to the Supplemental Nutrition Assistance Program, or SNAP. But whatever the name, enrollment rose from 17.3 million in 2001 to 46.2 million in October 2011. In the March 2012 issue of Amber Waves, published by the U.S. Department of Agriculture,  Margaret Andrews and David Smallwood ask: "What’s Behind the Rise in SNAP Participation?"

Here's a graph showing SNAP enrollment, along with the unemployment rate and the poverty rate. The decline in SNAP enrollment after 1996 is part of the aftermath of the welfare reform act that passed that year, which led to much smaller welfare rolls and also tightened rules for receiving Food Stamps. the run-up in SNAP enrollment since the start of the recession is large, but Andrews and Smallwood point out that it's within the historical parameters of what one would expect given the rise in unemployment rates and poverty rates over that time. 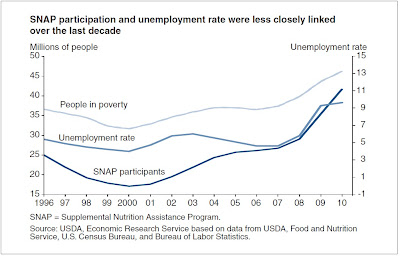 What's perhaps less expected in the graph is that Food Stamp enrollment was rising steadily from 2001 up through 2006, although unemployment rates were low and falling during much of that time. The authors trace much of this change to changes in federal rules making it easier for people to apply, and easier for states to certify to the federal government that the benefits are being targeted. In addition, SNAP benefit levels were increased both in the 2008 farm bill and in the 2009 "stimulus" legislation, making it more attractive to apply. Here's a graph showing the maximum SNAP benefit for a household of four and the average benefit. 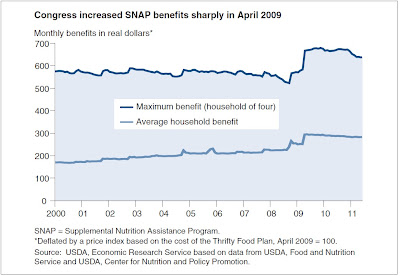 When you look at the numbers, Food Stamps play what may be a surprisingly large role in America's social safety net for the poor. Total spending on Food Stamps in 2011 was about $78 billion. According to the Center on Budget and Policy Priorities, "Roughly 93 percent of SNAP benefits go to households with incomes below the poverty line, and 55 percent go to households with incomes below half of the poverty line ..."


For comparison, federal expenditures through the Earned Income Tax Credit were about $56 billion in 2011. As another comparison, total spending on Temporary Assistance for Needy Families (TANF), what is what most people mean by "welfare," was about $33 billion in combined federal and state spending in 2010. In many states, SNAP far outstrips TANF in the level of support it provides for low-income families.
Posted by Timothy Taylor at 6:00 AM