For the uninitiated, when economists refer to FX, the abbreviation doesn't mean "special effects" or "Federal Express" or "Fighter, Experimental." It means "foreign exchange." Morten Bech discussed "FX volume during the financial crisis and now" in the March 2012 issue of the BIS Quarterly Review. BIS stands for Bank of International Settlements, an organization whose members are central banks and some international organizations, which among other tasks holds conferences, collects data, and facilitates some financial transactions.

In particular, BIS produces the Triennial Central Bank Survey of Foreign Exchange and Derivatives Market Activity, which comes out every three years. The most recent version found that FX trading activity averaged $4.0 trillion a day in April 2010. Yes, that's not million or billion per day, or trillion per year, but $4 trillion per day.  I'll say a bit more about the implications of that remarkable total in a moment, but Bech's main task is to look at the underlying data for the three-year survey and thus find a way of estimating the FX market at semiannual or even monthly intervals. Bech writes:

"By applying a technique known as benchmarking to the different sources on FX activity, I produce a monthly time series that is comparable to the headline numbers from the Triennial going back to 2004. Taking stock of FX activity during the financial crisis and now I estimate that in October 2011 daily average turnover was roughly $4.7 trillion based on the latest round of FX committee surveys. Moreover, I find that FX activity may have reached $5 trillion per day prior to that month but is likely to have fallen considerably into early 2012. Furthermore, I show that FX activity continued to grow during the first year of the financial crisis that erupted in mid-2007, reaching a peak of just below $4.5 trillion a day in September 2008. However, in the aftermath of the Lehman Brothers bankruptcy, activity fell substantially, to almost as low as $3 trillion a day in April 2009, and it did not return to its previous peak until the beginning of 2011. Thus, the drop coincided with the precipitous fall worldwide in financial and economic activity in late 2008 and early 2009."

Here's a result of Bech's work. The horizontal axis is years; the vertical axis is the size of the FX market. The green line plots the results for 2004, 2007, and 2010 from the Triennial Survey. The red line uses the benchmarking technique to create a semi-annual data series, and the blue line builds on that to create a monthly data series. The vertical lines refer to August 9, 2007, when the first really bad news about the financial crisis hit world financial markets, and September 15, 2008, the middle of what was arguably the worst month of the crisis. 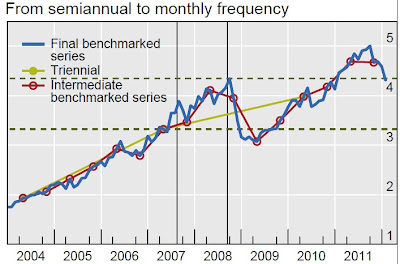 As Bech points out: "The FX market is one of the most important financial markets in the world. It
facilitates trade, investments and risk-sharing across borders." In that spirit, his result interest me in several ways.

First, I'm always on the lookout for ways to illustrate the effect of a global financial crisis in ways that don't involve trying to explain interest rate spreads to students. Seeing the size of the foreign exchange market contract by one-quarter or so in late 2008 and early 2009 is a useful illustration. There are four more graphs for illustrating the financial crisis in this blog post of last August 3, and two more in this post of May 17.

Over time, there does appear to be a tendency for foreign exchange rates to move in the general direction that reflects their purchasing power--the so-called "purchasing power parity" exchange rate. In the Fall 2004 issue of my own Journal of Economic Perspectives, Alan M. Taylor and Mark P. Taylor review "The Purchasing Power Parity Debate," and find that such movements do occur over the long-run, but they proceed slowly, over a period of several years, and in the meantime exchange rates are buffeted by changing investor sentiments and current events.
Posted by Timothy Taylor at 6:00 AM