Hyperinflation and the Zimbabwe Example

Back in the Paleolithic era when I was learning economics, Germany's hyperinflation of the 1920s was the classic example of hyperinflation. When I was teaching intro economics classes in the late 1980s, I would use hyperinflation examples from Latin America, and by the mid-1990s, I could use examples from eastern Europe after the collapse of the Soviet Union. But for the next few years, I suspect, the canonical example of hyperinflation will be what has happened in Zimbabwe from 2007-2009, which has the dubious distinction of being the only hyperinflation of the still-young 21st century. Janet Koech of the Federal Reserve Bank of Dallas offers a nice overview of "Hyperinflation in Zimbabwe," which appears in the Annual Report of the Globalization and Monetary Policy Institute.

Koech reports: "From 2007 to 2008, the local legal tender lost more than 99.9 percent of its value." Here's a picture of the infamous $100 trillion bill, issued in 2009. The existence of the bill is black comedy, because represents economic devastation for the 12 million or so people of Zimbabwe. 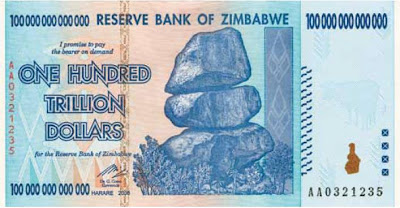 Hyperinflation doesn't have a precise definition, but a common rule-of-thumb is that it occurs when the rate of price inflation exceeds 50% per month. If this rate is compounded over a year, prices multiply by a factor about 130 in a year. Here's the monthly inflation rate taking off in in Zimbabwe. 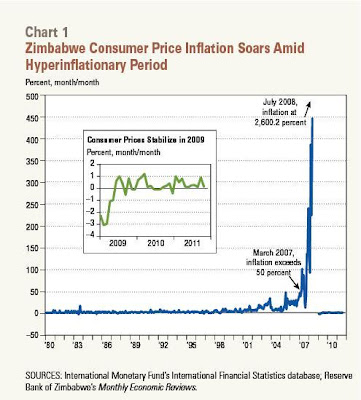 Zimbabwe's economic disaster was built on terrible economic policy and bad luck. A combination of droughts and ill-designed land "reforms" savaged production of important crops like maize and tobacco. Government spending was nearly uncontrolled. Foreign debts mounted. And then the government of Zimbabwe tried to solve its problems by turning on the printing presses.


Koech writes: "Hyperinflation and economic troubles were so profound that by 2008, they wiped out the
wealth of citizens and set the country back more than a half century. In 1954, the average GDP per
capita for Southern Rhodesia was US$151 per year (based on constant 2005 U.S.-dollar purchasing power-parity rates). In 2008, that average declined to US$136, eliminating gains over the preceding 53
years ..." 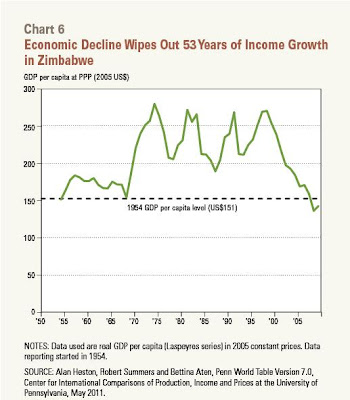 Hyperinflation causes extraordinary contortions in an economy. When all prices are rising dramatically all the time, comparing prices become essentially impossible, and the price mechanisms itself breaks down. Koech describes (footnotes omitted):

"The Economic Times newspaper noted on June 13, 2008, that “a loaf of bread now costs what 12 new cars did a decade ago,” and “a small pack of locally produced coffee beans costs just short of 1 billion Zimbabwe dollars. A decade ago, that sum would have bought 60 new cars.” At the height of the hyperinflation, prices doubled every few days, and Zimbabweans struggled to keep their cash resources from evaporating. Businesses still quoted prices in local currency but revised them several times a day. A minibus driver taking commuters into Harare still charged passengers in local currency but at a higher price on the evening trip home. And he changed his local notes into hard currency three times a day.

The government attempted to quell rampant inflation by controlling the prices of basic commodities and services in 2007 and 2008. Authorities forced merchants—sometimes with police force—to lower prices that exceeded set ceilings. This quickly produced food shortages because businesses couldn’t earn a profit selling at government-mandated prices and producers of goods and services cut output to avoid incurring losses. People waited in long lines at fuel stations and stores. While supermarket shelves were empty, a thriving black market developed where goods traded at much higher prices. Underground markets for foreign exchange also sprang up in back offices and parking lots where local notes
were converted to hard currencies at much more than the official central bank rate. Some commodities, such as gasoline, were exclusively traded in U.S. dollars or the South African rand, and landlords often accepted groceries and food items as barter for rent."

Here are some manifestations of hyperinflation: empty supermarket shelves (after all, anything real will hold value better than a hyperinflating currency) and gallows humor. 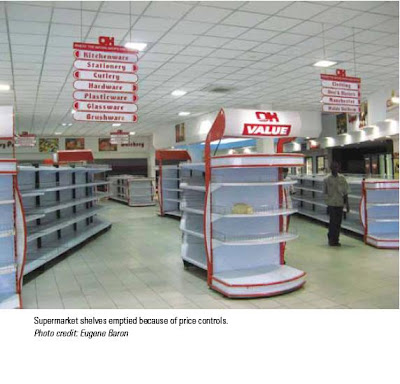 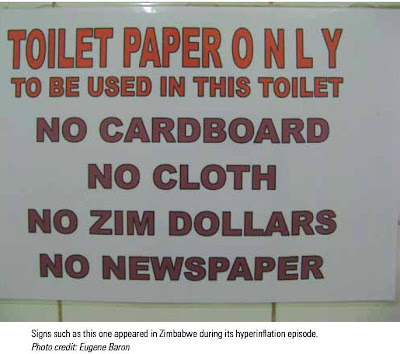 
Here's the Dishonor Role of Hyperinflations during the last couple of hundred years.