The Dramatic Expansion of Corporate Bonds

Overall world debt in the last year or two is at its all-time high as a share of world GDP. But there is common pattern that as countries grow and their financial markets develop, their level of debt also tends to rise. Perhaps even more interesting is that the importance of the components of that debt have been shifting. During and after the Great Recession, government borrowing was the main driver of rising global debt. But corporate borrowing has become more important

Susan Lund, Jonathan Woetzel, Eckart Windhagen, Richard Dobbs, and Diana Goldshtein of the McKinsey Global Institute provide an overview in their June 2018 discussion paper, Rising Corporate Debt: Peril or Promise?  An overview of the report is here; the full report is here. They write:

"A relatively new feature of the debt landscape in recent years has been a shift in corporate borrowing from loans to bonds. Given the growing pressure on banks to meet new capital and liquidity standards, global nonfinancial corporate loans outstanding have been growing by only 3 percent annually on average since 2007 to stand at around $55 trillion in 2017. However, the share of global corporate debt in the form of bonds has nearly doubled, and the value of corporate bonds outstanding has grown 2.7 times since 2007. This is a positive trend, leading to a diversification of corporate financing. However, we also find risks." 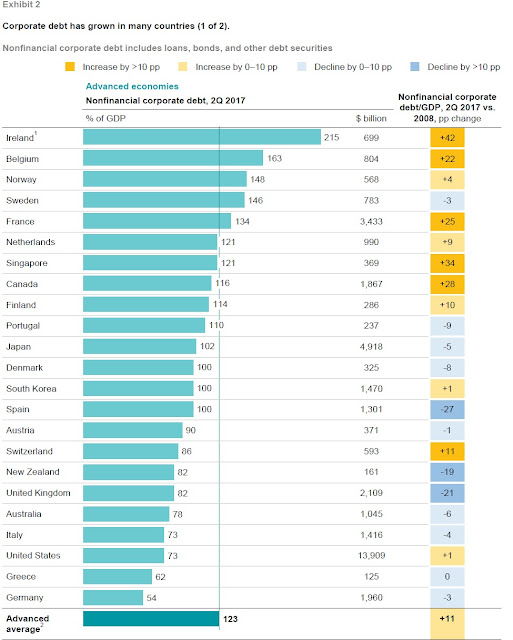 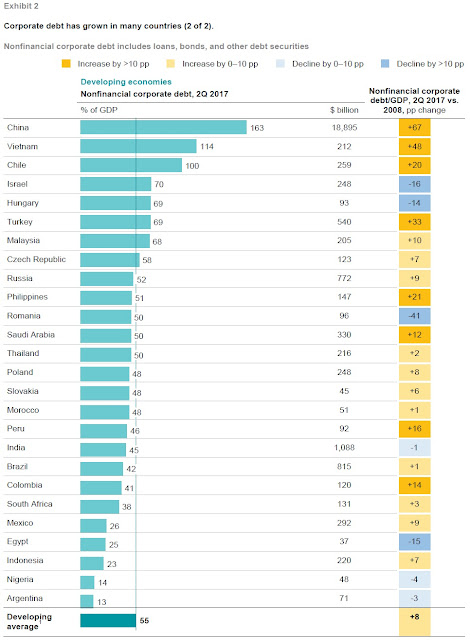 And here are a few comments from the report that caught my eye:

On China's corporate borrowing and that of other emerging markets:

"The value of China’s nonfinancial corporate bonds outstanding increased from $69 billion in 2007 to $2 trillion by the end of 2017, making China one of the largest bond markets in the world. In developing countries other than China, corporate bonds outstanding have also grown, although at a more measured pace of 14 percent a year, from $313 billion in 2007 to $1.2 trillion in 2017 ...  Growth has been particularly strong in Brazil, Chile, Mexico, and Russia.

"While in China 95 percent of corporate bonds outstanding are denominated in the local currency, in other developing countries that is not the case. Historically, nearly all companies in developing economies issued bonds in foreign currencies because investors would not take the risk of buying bonds in local currencies. However, over the past decade, larger local-currency bond markets have developed. Still, roughly two-thirds of corporate bonds in developing economies maturing annually are denominated in US dollars and other foreign currencies. This creates additional risk, because debt service costs will soar if the local currency depreciates (and the company does not have revenue streams in the foreign currency)."

On the wave of companies that are going to want to refinance bonds. The report estimates that in China, India, and Brazil, as much as 30-40% of all bonds could risk default if interest rates rise.

"As a bond matures, companies have two choices: to repay the principal amount borrowed, or to issue a new bond to replace the maturing one. Historically, companies issued long-term bonds for project finance and repaid the debt once due. Today, however, most borrowers seek to refinance maturing bonds by issuing new ones. From 2018 to 2022, a record amount of bonds—between $1.6 trillion and $2.1 trillion annually—will mature. Globally, a total of $7.9 trillion of bonds will come due during those five years, based on bonds already issued. However, some bonds have maturities of less than five years and may still be issued and come due during that period. If current issuance trends continue, then as much as $10 trillion of bonds will come due over the next five years ...  At least $3 trillion of this total will be from US corporations, $1.7 trillion from Chinese companies, and $1.7 trillion from Western European companies. Rising interest rates could make it more difficult for many borrowers to refinance their debt."

I don't have a good sense of whether all this is real cause for alarm, or just a blip in the road. But it does seem to me that in the last few years, with a combination of very low government interest rates and tighter restrictions on bank lending, there has been a lot of eagerness by investors to "search for yield" in corporate bond markets. It wouldn't be startling to find that a share of those investors have not taken appropriate care to hedge the risks involved.