When the G-7 gatherings originated in the 1970s, the included only finance ministers who typically met with little notice or publicity. They were working meetings. But in the 1980s, they became public events with top government leaders present. As the Council of Foreign Relations has noted, it "The G-7 serves as a forum for highly industrialized democracies to coordinate economic, security, and energy policy."


However, the seven countries in the G-7--the United States, Germany, Japan, Canada, France, Italy, and the United Kingdom--represent a falling share of world GDP, as shown in this figure in a short article from Jim O'Neill and Alessio Terzi at the Bruegel website: 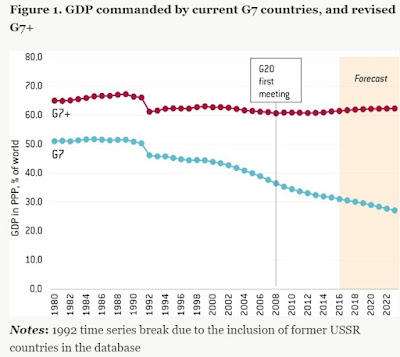 They propose a G-7+, which would cover a more sustained share of world GDP. Basically, Germany, France, and Italy combine into one spot for the euro-zone countries. Canada drops out. This frees up spots to add Brazil, India, and China, while still holding to seven members.

They write: "Crucially, the G7+ would provide leadership and fast-paced decision-making on economic and financial issues of global relevance – but should not replace the G20, which remains an important avenue for discussions of all other issues that call for higher representativeness, ranging from terrorism and food security to tax avoidance and climate change."

The G-20, for those scoring at home, is a broader group that grew out of the G-7: "The G20 is made up of 19 countries and the European Union. The 19 countries are Argentina, Australia, Brazil, Canada, China, Germany, France, India, Indonesia, Italy, Japan, Mexico, Russia, Saudi Arabia, South Africa, South Korea, Turkey, the United Kingdom and the United States."

Communication between countries can be valuable, and regular forums can  make that communication flow more easily than continually trying to build new forums. So I'm not exactly opposed to the G-7, or an expanded G-7+, or the G-20. It's certainly useful for the G-7 countries to remind themselves and each other that their global economic and political power is diminishing. But it also seems to me that such groups can easily be taken over by pretentiousness and public relations gestures, and that world leaders might in some cases find their time better-spent in working on problems of their domestic economies.

Readers who are interested in digging into the ways in which G-7 and G-20 cooperation might influence policy might usefully begin with two essays.  Adam Triggs has written "Do Global Forums Influence Domestic Macroeconomic Policies  Anymore? Results from In-depth Interview with the World's Leaders, Central Bank Governors, Finance Ministers, and Officials" (Global Economy and Development at Brookings, Working Paper 115, April 2018). Triggs shows persuasively that many world leaders at least claim that summits are useful.

On the other side, Stephen Kirchner expresses a high degree of skepticism about the usefulness and effectiveness of these international organizations in "The G20 and Global Governance," which was published in the Cato Journal (Fall 2016, pp. 485-506).
Posted by Timothy Taylor at 12:11 PM