Happiness Around the World--And For Migrants

The utilititarian philosopher Jeremy Bentham wrote of a "sacred truth — that the greatest happiness of the greatest number is the foundation of morals and legislation." The World Happiness Report 2018   is edited by John F. Helliwell, Richard Layard and Jeffrey D. Sachs, with chapters by various scholars. It takes insights about happiness seriously. In this version of the annual report, most of the chapters relate happiness to migration topics, although are also a few chapters with a review of recent happiness data around the world, chapters about about happiness in Latin America more broadly, and about happiness issues related to the US health care system.

The happiness data is based on surveys, commonly using the "answers to the Cantril ladder question
asking respondents to value their lives today on a 0 to 10 scale, with the worst possible life as a 0
and the best possible life as a 10." The terms "happiness” and “subjective well-being” are then commonly used to describe higher and lower scores. 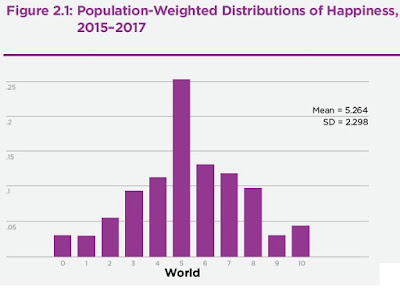 At the national level, one can then look at how happiness correlates with various other factor. The consider "national average life evaluations in terms of six key variables: GDP per capita, social support, healthy life expectancy, freedom to make life choices, generosity, and freedom from corruption. Taken together, these six variables explain almost three-quarters of the variation in national annual average ladder scores among countries, using data from the years 2005 to 2017."

Here's one table showing the top 20 happiest countries (the US ranks 18th) and the bottom 20 (Burundi is lowest). The overall bars show the happiness measure, while the colors on the bar show what portion of total happiness can be attributed to the correlations with the six factors just mentioned. 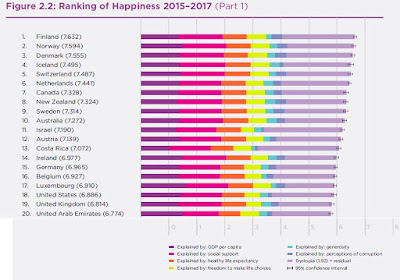 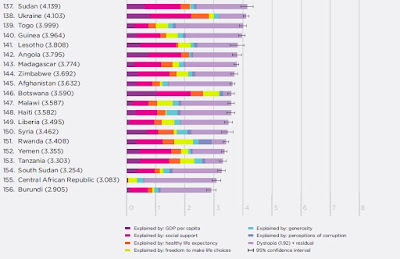 Researchers in this area can also look at the happiness survey data by individual characteristics, not just national characteristics. They can look at distribution of happiness across countries, for example, or happiness of particular groups, like those in rural or urban areas, or migrants. This year's has a number of chapters on migrants, summaries in and overview chapter by Helliwell, Layard and Sachs. For example, they write:

"So what determines the happiness of immigrants living in different countries and coming from different, other countries? Three striking facts emerge.

1. In the typical country, immigrants are about as happy as people born locally. (The difference is under 0.1 point out of 10). ... However the figure also shows that in the happiest countries immigrants are significantly less happy than locals, while the reverse is true in the least happy countries. This is because of the second finding.

2. The happiness of each migrant depends not only on the happiness of locals (with a weight of roughly 0.75) but also on the level of happiness in the migrant’s country of origin (with a weight of roughly 0.25). Thus if a migrant goes (like many migrants) from a less happy to a more happy country, the migrant ends up somewhat less happy than the locals. But the reverse is true if a migrant goes from a more to a less happy country. ... Another way of describing this result is to say that on average, a migrant gains in happiness about three-quarters of the difference in average happiness between the country of origin and the destination country.

3. The happiness of immigrants also depends importantly on how accepting the locals are towards immigrants. (To measure acceptance local residents were asked whether the following were “good things” or “bad things”: having immigrants in the country, having an immigrant as a neighbour, and having an immigrant marry your close relative). In a country that was more accepting (by one standard deviation) immigrants were happier by 0.1 points (on a 0 to 10 scale)."

I find the evidence from happiness surveys to be consistently interesting, but I confess that at the end of the day, I don't always know what to make of it. Subjective self-evaluations can be hard to interpret, because they always happen with a social context. For example, consider these patterns about internal migration in China:


"Over the years 1990-2015 the Chinese urban population has grown by 463 million, of whom roughly half are migrants from villages to towns and cities. By contrast, over the same period the increase in the number of international migrants in the entire world has been 90 million, less than half as many as rural to urban migrants in China alone. Thus internal migration is an order of magnitude larger than international migration. ...

"The biggest factor affecting the happiness of [within China] migrants is a change of reference group: the happiness equation for migrants is similar to that of urban dwellers, and different from that of rural dwellers. This could explain why migrants say they are happier as a result of moving – they would no longer appreciate the simple pleasures of rural life."

Posted by Timothy Taylor at 9:47 AM