When market forces of supply and demand become involved with parts of the human body, the result can be a high degree of ambivalence.  In the US, for example, a system has evolved where the health care system primarily relies on volunteers for blood, but on paying those who donate blood plasma. Not coincidentally the system of paid US now supplies nearly two-thirds of all the blood plasma available in the world.

This pattern is under discussion in Canada, which in recent years has relied on imports of US plasma for 83% of its use. An Expert Panel on Immune Globulin Product Supply and Related Impacts in Canada has recently published a report: Protecting Access to Immune Globulins for Canadians.  The report lays out facts and evidence, without taking a specific position on paid donations for plasma. However, a Canadian group called “Ethicists and Economists for Ethical Donation-Compensation Practices” has published an open letter arguing: "Both the ethical and the economic arguments against a compensatory model for blood plasma for further manufacture into PDMPs (hereafter: “the compensatory model”) are weak. Moreover, significant ethical considerations speak in favour of the compensatory model ..."


"Plasma is a yellowish coloured liquid component of blood that normally holds the blood cells in whole blood in suspension. It makes up about 55% of the body's total blood volume (TBV). It is the raw material manufactured into a range of medications used by Canadians both inside and outside the hospital setting. ... Over the years, the use of immune globulins (IG), the most widely used product derived from human plasma, has expanded from the treatment of patients who do not make antibodies to protect themselves from infection (immunodeficiencies) to patients across a broad spectrum of illnesses (hematologic, neurologic, rheumatologic, dermatologic) where it is used as an immune modifier."

Dramatically more plasma is collected in the countries where paying donors is widespread: the US, Austria, Czech Republic, and Germany. The Expert Panel again:


"The only 4 countries that are considered 100% self-sufficient in IG are those that had both voluntary and paid donors as seen in Table 3.2. ...  Overall, the US supplies 64% of all plasma collected globally and 74% of all source plasma. In 2015, the US supplied 83% of the plasma used to make IG and PDPs for Canadian patients. The Panel was unable to find any evidence that saturation of the US plasma collection market (i.e. maximum number of plasma donors or source plasma collections has been reached) was a significant risk in the medium term. There were specific geographic regions highlighted in the US where the intensity of plasma collection activity is increasing significantly. In these areas, this concentration of source plasma collection centres drives up competition for plasma donors, which is reflected in the compensation being paid to those donors, however, there were no metrics or evidence submitted to the Panel that suggested that saturation was imminent." 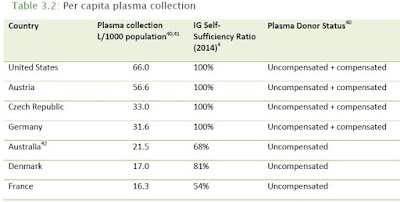 There is considerable variation across countries in the use of immunoglobulin products derived from blood plasma The US, with its plentiful supplies and high tech approach to medicine, leads the way. But the substantial rise in use of these products is not just a US phenomenon. 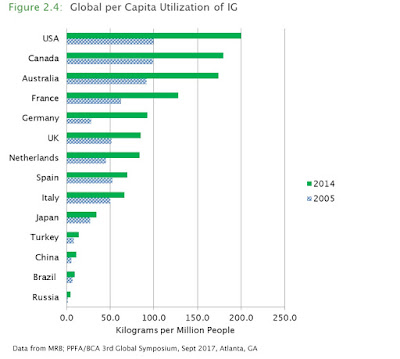 Here's a figure showing the growth in demand for immunoglobulin products, which come from blood plasma 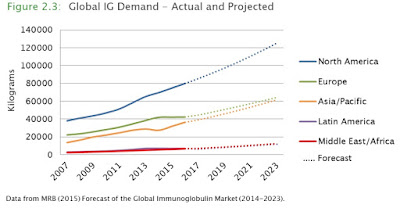 And here's a figure showing hat the number of plasma collection centers in the US is on the rise. 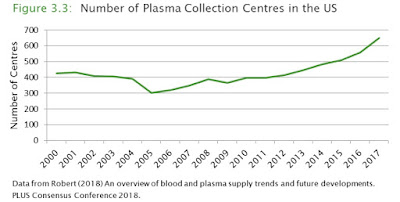 In thinking about payment to blood plasma donors, a few issues immediately arise. We don't have a problem in a market economy with paying workers for tasks that are physically exhausting or even tasks that have a degree of risk. But being paid for plasma impose health costs  that should be a concern? Also, does paying for  plasma raise a risk of attracting unhealthy donor, in a way that might compromise the healthiness of the plasma supply?

The Economist describes the process for plasma donation, along with the other isssue, in a couple of articles about paying for plasma in the May 12 issue: a leader called "Lift bans on paying for human-blood plasma: The limited medical and social risks are dwarfed by the benefits" and a longer article called "Bans on paying for human blood distort a vital global market: The market in life-saving blood-plasma products depends on Americans who are paid for it."


"The global demand for plasma is growing, and cannot be met through altruistic donations alone. Global plasma exports were worth $126bn in 2016—more than exports of aeroplanes. ... Plasma today is mostly collected via apheresis, a process where whole blood is extracted, spun in a centrifuge, and the plasma is skimmed off. Red blood-cells are then mixed with an anticoagulant and transfused back into the donor. Blood-donation can take just 10-15 minutes. Apheresis usually takes at least an hour. Plasma replenishes more quickly than red blood-cells. So donors can give more at one session, and far more frequently. In most countries whole-blood donors can give around 500ml of blood, which yields just 250ml of plasma, at most once every two months. Plasma donors can give up to 800ml of plasma—and in America are allowed to do so twice a week. This quickly adds up. In a year a plasma donor could give over 80 litres of the stuff, compared with just 1.6 litres from a whole-blood donor."

In terms of potential health dangers from plasma, there is now a powerful combination of ways of both testing plasma and treating it. Thus, the Canadian Expert Panel notes: "As noted above, the multiple safety steps and ongoing oversight and surveillance by various agencies have resulted in an impressive safety record for PDPs [plasma derived products] with no confirmed case of transmission of infectious disease by PDPs in over 20 years."

One of the responses to the dominance of paying for plasma is to advocate a big push for more donations of blood plasma. I certainly have nothing against a push for more volunteer donations. But if (or when) such a push falls dramatically short of the rising demand for immunoglobulins and other plasma-derived products, it seems to me that payment for plasma should be acceptable. The risks to donors are not high, and the methods of monitoring and testing have become quite good.

After all, when you think of the chain of companies and health care providers involved in the development, production, and clinical use of immunoglobulins and other plasma-derived products, it's hard for m to see why the plasma donors are expected to be volunteers while all the other parties are being paid for their services.

The Canadian Expert Panel notes that the line between "voluntary" and "paid" blood donors seems to be turning into more of a continuum over time, in which various kinds of compensation falling short of cash payments becoming more common.


"To further complicate things, over the last 2 decades there has been an evolving continuum of donor compensation, incentives, and rewards in the voluntary donor sector. There is no longer a clear delineation between a “volunteer” donor and a “paid” donor. In the global non-profit blood operator community, a wide array of monetary and non-monetary incentives have been developed to recruit and sustain blood and/or plasma donors – these incentives include cash payments, vouchers, discount coupons, gifts, event tickets, health checks, or time off work ... Survey results from 2014 document the variety of monetary and non-monetary incentives in use for volunteer apheresis plasma and/or blood donors in Europe ... . The fixed sums offered to volunteer blood and plasma donors ranged from 16-30 Euros in the countries where donor payment was allowed (Germany, Czech Republic, and Austria), while the Netherlands, offers a 20 Euros incentive to reimburse travel costs to volunteer donors. In addition, of 28 respondent EU countries, 11 offer 1 or 2 full days off work for both blood and plasma donations, yet only 3 of those countries consider these  benefits an incentive / payment for the volunteer donor. Some argue that it is incongruous that such high-value practices are not considered forms of payment."

Posted by Timothy Taylor at 9:40 AM